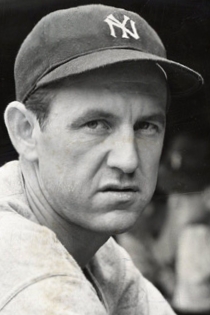 The Boston Red Sox arrived in New York for a three-game series, September 6-8, 1939, against the three-time defending world champion New York Yankees. The second-place Red Sox trailed the first-place Yankees by 13½ games. If the Red Sox were to overtake the Yanks, they needed to sweep this series.

The first two innings were scoreless. With two outs in the top of the third, Cramer beat out an infield hit and advanced to third base on Joe Vosmik’s single to right field. Williams followed with a single to right field, and Cramer came home with the first run of the game. The dangerous Foxx drove the ball to the right-field wall, but Keller made a spectacular leaping catch to thwart the rally.

Babe Dahlgren led off the bottom of the third inning by grounding the ball to Cronin at short. Cronin threw high to Foxx at first base, and Dahlgren was safe on the error. (Dahlgren had become the Yankees’ regular first baseman when he replaced the ill Lou Gehrig on May 2; Gehrig ended his streak of 2,130 consecutive games that day.) Gomez grounded the ball to third baseman Jim Tabor, who threw to second base for a force out of Dahlgren. Crosetti then singled past Foxx into right field, and Gomez made it to third base.

Rolfe grounded the ball directly back to Grove. It should have been an easy double play, but Grove threw wildly into center field, and Gomez scored. It was an unusual blunder by Grove, who committed, on average, only two errors per season. Grove walked Keller to load the bases but escaped the jam when DiMaggio popped out and Dickey struck out. After three innings, the score was tied, 1-1.

In the top of the fourth inning, Yankees left fielder Jake Powell took a home run from Tabor with a fine catch. In the bottom of the inning, Powell sent the ball to the right-field wall for a double; Williams crashed into the wall in pursuit of Powell’s drive but was unhurt. (Williams played right field in this, his rookie season, before switching to left field for the rest of his career.) Although both teams had baserunners and opportunities, neither team scored in innings four through seven.

Cramer led off the top of the eighth with a double to left field and moved to third base on Vosmik’s sacrifice bunt. It was an ideal opportunity for Williams, the RBI leader, but Gomez fanned him for the second out. Foxx’s weak popup ended the threat.

DiMaggio led off the bottom of the eighth by blasting a pitch from Grove into the left-field bleachers. It was DiMaggio’s 26th home run of the season and gave the Yankees a 2-1 lead. Dickey followed with a hard grounder that was adeptly handled by Foxx, but Grove failed to cover first base and Dickey reached safely. Gordon drove a ball into the left-field bleachers. Home-plate umpire Bill Summers initially called it a home run but reversed his decision after third-base ump Steve Basil said it was foul. Gordon then struck out.

Joe Cronin led off the top of the ninth with a walk, but Gomez retired the next three batters to seal the Yankee victory. The final score was New York 2, Boston 1. Boston’s slim pennant hopes were dimmed, and in the words of John Drebinger of the New York Times, the Red Sox were “receding more rapidly from view than the planet Mars.”

In preparing this article, the author relied on the September 7, 1939, issues of the Boston Daily Globe and New York Times, and information retrieved from Retrosheet.org and Baseball-reference.com in April 2015.