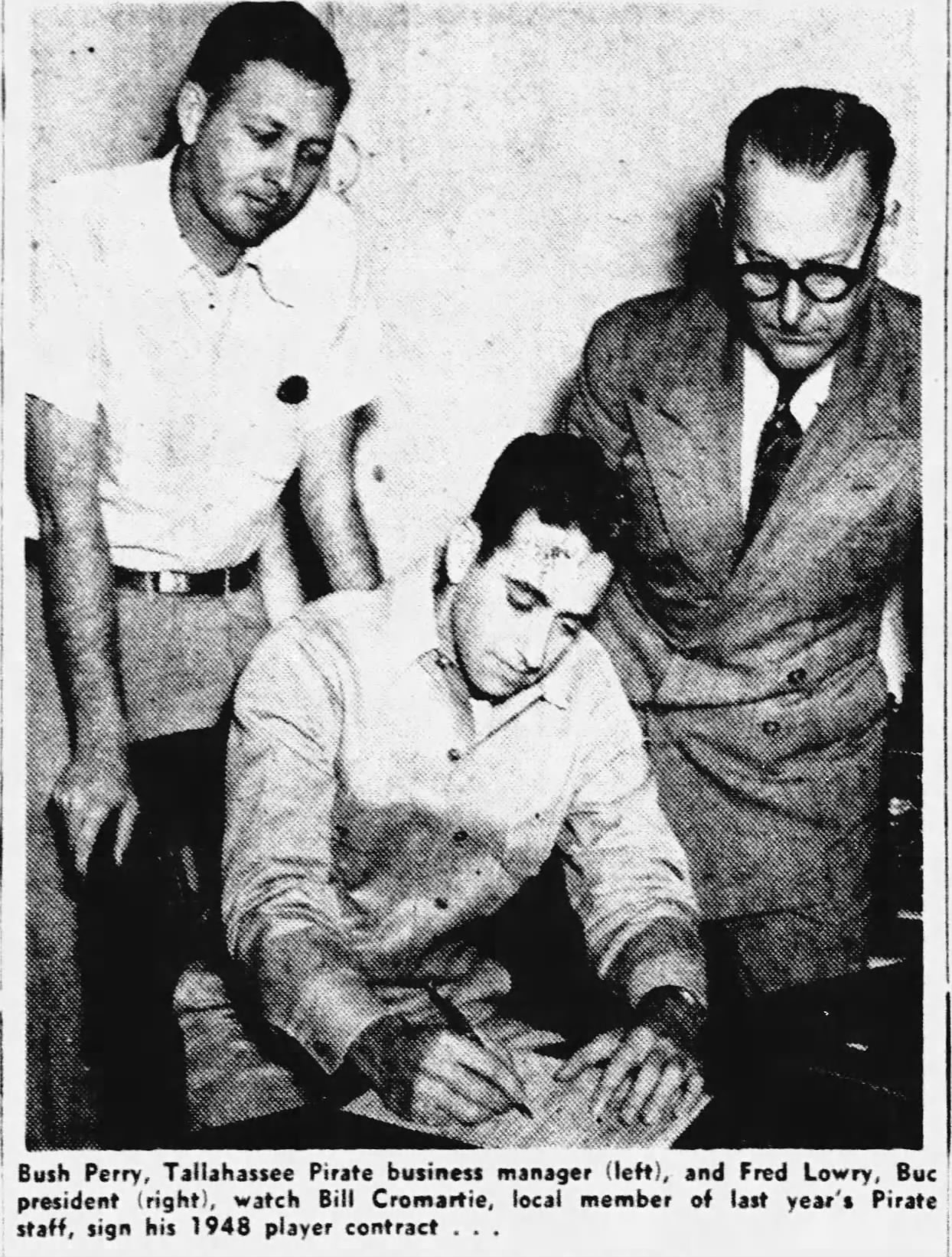 In 1948 Florida’s insular capital city of Tallahassee had a population of less than 30,000.1 Far from the urban centers with major-league baseball,2 Tallahassee fans instead doted on their Pirates, an affiliate of the parent Pittsburgh organization competing in the Class D Georgia-Florida League.3

The Tallahassee Capitals were an unaffiliated member of the Georgia-Florida League from 1935 through 1942. After a World War II hiatus, management affiliated with Pittsburgh in 1946 and played as the Pirates through the 1950 season. As of 2021, a Tallahassee team last played in an affiliated minor league in 1954: the Tallahassee Rebels of the Class B Florida International League.

The 1947 Pirates had finished a solid 80-60, good for third place in the regular-season standings, just .001 behind the second-place team, the unaffiliated Waycross (Georgia) Bears.4 Tallahassee dispatched the Bears in the first round of the 1947 playoffs but then lost the best-of-seven final to the unaffiliated Moultrie (Georgia) Packers, winner of the regular-season pennant.

Hopes were high for the 1948 Pirates. Fred Pettijohn of the Tallahassee Democrat assessed the team in an Opening Day column, excited by a new manager in Jack Rothrock. “He’s the winning type, and he has a winning record!”5 Pettijohn evaluated the Pirates as having good “strength through the middle of the diamond” and “one of the strongest early season mound corps in the league.” He concluded: “The Pirates, overall, look like a contender. Their seasoned pitching and tight infield play may get the team off to a good start while the rest of the loop is weeding out the dead wood in their mound staffs and whittling their inner defenses down.”6

Further indicating optimism, the club increased ticket prices for 1948. The new prices ranged from 60 cents for adults (“an increase of 20 cents for women over last year”), to 35 cents “for colored fans,” and 25 cents for “fans admitted on pass.” The increases were attributed to a city tax “on proceeds of Centennial Field users to build up a fund toward a new stadium.”7

The core of the 1948 starting rotation consisted of right-hander George “Snuffy” Yebernetsky, lefty George Judy,8 and righty Bill Cromartie. Cromartie, already 26 but returning to the Pirates for only his second professional season, was a local product from Leon High School, Tallahassee American Legion baseball, and the University of Florida. “His late season mound work bolstered the Pirates in their drive to second place in the [1947] league standings.”9 Veterans Yebernetsky, 27, and Judy, 30, had combined for 20 wins between them in 1947. Although the three pitchers who had recorded the bulk of the Pirates’ wins were not back for 1948, Pettijohn knew the league; with the reserve clause in full force, player comings and goings were a simple fact of life in Class D.10

Somehow overlooked in Pettijohn’s preseason summary was 19-year-old Frank Thomas, a Pittsburgh native signed by the club immediately after high-school graduation in 1947. Thomas, who went on to hit 286 home runs in a 16-year major-league career, would be playing his first professional season with Tallahassee in 1948.11

True to prediction, Tallahassee got off to a strong start, but by late August, with the end of the season approaching in early September, Rothrock’s club was just a game ahead of Thomasville for fourth place – the last playoff spot.12 Third-place Albany13 was only a game and a half ahead of both Tallahassee and Thomasville, but by September 2 Albany had slipped back, Moultrie had made a run, and “with only two days to the final wire the Bucs, Thomasville, and Moultrie [were] packed together tighter than two fat guys in a phone booth.”14

The Pirates pulled out the playoff spot by winning the final game on their regular schedule head-to-head against Thomasville, 5-2, at Centennial Field on Friday, September 3.15 But the wear and tear of the hectic late-season scramble and the fact that Tallahassee’s playoff series against pennant-winning Waycross was scheduled to start the next night on the road left the Pirates’ pitching in disarray. To make things more disheartening, Waycross had won 13 of the 20 games between the teams during the season, including eight of 10 in the second half. Not even Pettijohn, the consummate booster, gave his hometown Bucs much of a chance in the best-of-five series.16

That pessimism was on the mark as the Pirates limped into Waycross with neither Yebernetsky (16-13 on the season), Judy (a surprising 14-0, considering his 4.11 ERA), nor Cromartie (10-7) available to pitch. They predictably lost the Saturday-night series opener 11-3 on September 4, using a succession of pitchers accustomed to long relief. The next afternoon, six Tallahassee errors helped the Bears coast, 9-3, and take a 2-0 series lead against the Bucs’ number-four starter Jim Kraus, relieved by Sal Del Isola. And there would be no rest as the series moved to Tallahassee – the third game was set for Labor Day, September 6, under the lights at Centennial Field. It was do or die for the floundering Pirates.

The game attracted 1,738 “screaming fans” who saw their “battling Bucs [come] from behind to grab a dramatic 6-3 decision.”17 Waycross ace Ray Seidel (23-7) had pitched the second game, so at least he was out of the way. Rothrock went with Ralph Woolford, who had pitched only 55 innings during the regular season. But his last game had been the playoff spot clincher against Thomasville on September 3. He was pitching on minimal rest but still the best option, with Yebernetsky ready for the fourth game – if the Pirates could get a win to stay in the series.18

Bears starter Harry Raulerson (13-11) and Woolford matched goose eggs over the first two innings. But Waycross deflated Tallahassee hopes with a three-run third inning. Charlie Brewster’s19 double drove home Bob Lyons and George Fisher; two batters later, Jeff Bell plated Brewster with a single. With six innings potentially left in their season, the Pirates were in a hole. Woolford made it through the third inning, but Rothrock lifted him in favor of Cromartie for the fourth. Cromartie gave Tallahassee some hope with a scoreless inning; then the Pirates began to show some life.

It started with an error, as Waycross first baseman Norm Galinkin dropped Jay Stasko’s pop fly. Herb “Dusty” Rhodes moved him to third with a single to right field, and Raulerson walked Harry Zeiser to load the bases. Raulerson got Andy Dravecky20 to roll into a double play, but Stasko scored to get Tallahassee on the scoreboard, 3-1. Tallahassee made it 3-2 in the fifth inning as two walks and a Waycross error loaded the bases before another walk by Raulerson forced in a run.

With sparkling defensive help from second baseman Stasko, Cromartie continued to blank Waycross through the eighth inning. Then, a Pirates’ “last-ditch four-run rally” did the job. Dravecky, Tommy Sezna – who had been hot throughout the series – John Overland, Eddie Wopinek, and Frank Thomas did the damage.21 The uprising started against Raulerson, who was replaced by George Fultz; “the Pirates fell on Fultz like a long-lost relative.” He was pulled in favor of Bob “Lefty” Cook, who got the third out.22

After Cromartie shut down the Bears in the ninth inning, Tallahassee savored a 6-3 win. Over the six innings of sterling relief that made him the winning pitcher, the former collegian allowed only four baserunners by the explosive Waycross offense – one hit, a hit batsman, and two walks. It was, to Pettijohn, who had covered the team all season, “his glossiest pitching performance of the year.”23

But with a chance to even the series, Tallahassee’s bubble burst the next night. Yebernetsky finally got a start but was ineffective, yielding eight Waycross runs in his seven innings of work.24 The Pirates even had a 6-5 lead after three innings that kept fans hopeful. But the Bucs never scored again. Six Tallahassee errors and 14 men left on base ultimately doomed the Pirates to an 8-6 loss that eliminated them from the series.

Waycross, the class of the league all season, went on to sweep the Albany Cardinals 4-0 in the 1948 playoff finals.25

Supplementing the specific sources cited in the Notes, I used the Baseball-Reference.com and Retrosheet.org websites for general information. I also used the B-R Minor League Encyclopedia for data on the 1948 Tallahassee Pirates and 1948 Waycross Bears as well as Tallahassee’s minor league history. I found the Stats Crew.com website a useful source for geographic and statistical details on the 1948 Georgia-Florida League. Fred Pettijohn’s thorough coverage of the Tallahassee Pirates and the Georgia-Florida League in the Tallahassee Democrat throughout 1948 was vital to this account.

The box score, from the September 7, 1948, Tallahassee Democrat:

2 The major league cities closest to Tallahassee in 1948 would have been either Cincinnati or St. Louis, both more than 750 miles distant. Major-league baseball arrived in the Southeast only in 1966, when the Braves moved from Milwaukee to Atlanta.

3 The 1948 Georgia-Florida League had eight teams, seven of them in Georgia. Tallahassee was the only league representative in Florida. The Georgia teams, based in Waycross, Valdosta, Albany, Moultrie, Thomasville, Cordele, and Americus, were all in the southern part of the state, spread from Americus to Waycross. The longest road trips, about 2½ hours each, were from Waycross to Americus, and from Tallahassee to either Waycross or Americus. Stats Crew.com, 1948 Georgia-Florida League map, accessed April 24, 2021. https://www.statscrew.com/minorbaseball/l-GAFL/y-1948

5 Rothrock managed Tallahassee only in 1948, but in five seasons managing at the Class C and D levels, he had a .556 winning percentage. Jack Rothrock managerial record, Baseball-Reference.com, accessed April 25, 2021. https://www.baseball-reference.com/register/player.fcgi?id=rothro001joh

8 Judy was a long way from home. He hailed from a tiny community in rural western Pennsylvania’s Clarion County. After service in World War II, “fulfilling his boyhood dream of playing baseball,” Judy begun his career with the Pittsburgh organization in 1946, pitching for the Class C Oil City (Pennsylvania) Oilers, 22 miles from his home. Pittsburgh assigned him to Tallahassee for 1947 and he was back for 1948. The 1948 season was his last in Organized Baseball. George A. Judy obituary, Find A Grave.com; George Judy player page, B-R Minor League Encyclopedia, Baseball-Reference.com, both accessed April 29, 2021.

10 Organized Baseball had 25 Class D leagues for the 1948 season. Pittsburgh alone had 15 clubs playing in leagues lower than Class A among which to distribute their minor leaguers that season.

11 Thomas was the only player on the 1948 Tallahassee roster to play in the majors. He debuted with the Pirates in 1951 and retired at the end of the 1966 season, when he played for the Chicago Cubs.

13 Pronounced “Al-benny” by south Georgians (and likely in Tallahassee as well).

19 Brewster, 31, was the only player on the 1948 Waycross roster to play in the majors. He had already been there, having made his debut with the 1943 Cincinnati Reds. Later that season he was traded to the Philadelphia Phillies. He played briefly for the Chicago Cubs in 1944 and finished his major-league career with the Cleveland Indians in 1946. Over parts of three seasons in the majors, he appeared in 69 games and hit .221.

24 Judy finally saw action in this game. He pitched the eighth and ninth innings in relief of Yebernetsky and shut out Waycross. But the Pirates didn’t mount any late-inning rallies this time; it stayed 8-6, Waycross.