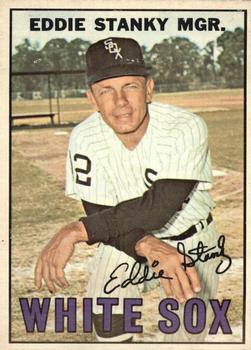 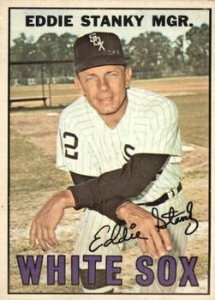 The 1967 baseball season was winding down, with less than 25 games to go. On Wednesday, September 6, half of the 10 American League teams were in the thick of a tight pennant race.

The dark-horse California Angels (72-66) were in fifth place, trailing the league-leading Minnesota Twins (78-60) by six games. Sandwiched between those squads were the Boston Red Sox, Chicago White Sox, and Detroit Tigers. Boston (79-62) was a mere half-game behind Minnesota, with Chicago (77-61) a game back, and Detroit (77-62) 1½ off the pace.

Bill Rigney and the Angels came to Chicago for a one-game series knowing that each loss California endured would hinder their postseason aspirations. Rigney grumbled when he surveyed the condition of the ballfield from the back of the batting cage. He said, “Look at that. Home plate’s a marsh. A swamp.”1 Chicago skipper Eddie Stanky had White Sox Park tailored to benefit the strength of his roster. He had the grounds crew loosen the dirt and soak the home-plate area, and let the infield grass grow high enough to keep balls from scooting through for hits.2 The manager bought a new suit for any of his starting pitchers who could get at least 20 groundball outs during a game.3

During an 11-year major-league playing career, Stanky enjoyed getting under the skin of his opponents. He carried this competitive personality into three-plus seasons as manager of the St. Louis Cardinals (1952-1955), and continued when the White Sox hired him after Al Lopez stepped down in 1965.4  Nicknamed “The Brat,” Stanky cleverly used the media to propel barbs at anyone who questioned the performance of his team. Stanky declared, “We’re last in homers. We’re last in hitting, last in double plays, and last in war and peace, but we’re in first place in guts.”5 He later added, “Four clubs are going to spend $20,000 printing World Series tickets and won’t use ’em. But the White Sox won’t lose. We’re down as the luckiest ballclub and the dullest – but you just wait.”6

On September 6, a small gathering of 12,103 during a pennant drive showed glaringly that the team enjoyed only lukewarm backing from its fans. Joe Horlen (15-6, 2.40 ERA) would start for the White Sox against 32-year-old Angels left-hander George Brunet (11-17, 3.25). Since debuting in 1961, Horlen was having his best season, and this season would lead the league in ERA (2.06) and shutouts (6). The 30-year-old right-hander had taken to chewing on wadded tissues to settle his “mound-duty” nerves after tobacco and gum options did not work for him.7

The Angels went down in order to start the 8:05 P.M. contest. Tommy McCraw swatted a first-inning double, but he remained at second on fly-ball outs by Tommie Agee and Ken Boyer. Both teams were set down 1-2-3 during the second, and Horlen retired his ninth in a row in the top of the third. Hitting just .125, Horlen singled in the bottom half, and advanced to second on an error by center fielder Roger Repoz. Don Buford singled to left and Horlen moved to third. Stanky put on the team’s first suicide squeeze of the season, but McCraw missed the bunt attempt. Horlen fell down about 12 feet from home and was tagged out by catcher Buck Rodgers.8

Aurelio Rodriguez singled to open the fourth, becoming the Angels’ first baserunner. Jimmie Hall punched a one-out safety to center, and advanced to second when Agee’s throw to third was not cut off. Former White Sox farmhand Don Mincher was intentionally passed, but first baseman McCraw forced Rodriguez at home on a grounder hit by Repoz. Horlen escaped the jam when Bubba Morton grounded out to leave the bases filled. In the top of the sixth with one out, the Angels’ Hall raced to second on a groundball error by second baseman Buford. Mincher drilled a single to right, but Ken Berry’s throw to backstop Duane Josephson nipped Hall at the plate.9

Tom Satriano batted for Brunet to lead off the eighth and walked. Paul Schaal ran for him. McCraw dashed in to field a bunt by Rodriguez and fired to shortstop Ron Hansen to force Schaal at second.10 Horlen ended his night by getting Jim Fregosi and Hall on fly balls. Angels closer Minnie Rojas walked Buford to begin the bottom of the eighth, and McCraw sacrificed him to second. The speedy Buford was later caught in a 6-5-4 rundown on Agee’s grounder.

Lefty Wilbur Wood, taking Boyer’s lineup spot, was on the mound in the ninth to face left-handed swingers Mincher and Repoz. Wayne Causey moved to second base, and Buford took over at third. The 25-year-old Wood had a short night after he walked Mincher. Once Woodie Held was announced as a pinch-hitter, Stanky brought in right-handed reliever Don McMahon. Held bunted, and first sacker McCraw fired the ball to second for a force.11 After a walk and a groundout, Angels runners were on second and third when McMahon fanned Bobby Knoop. In the bottom of the ninth, Rojas pitched around Berry’s infield single to send the game into extra innings.

More changes dotted scorecards in the top of the 10th with Berry moving from right field to left and Buddy Bradford going to right while taking the batting spot of Pete Ward. McMahon retired pinch-hitter Rick Reichardt, Rodriguez, and Fregosi without a ball leaving the infield. Left-hander Curt Simmons came on for California and gave up a two-out single to McCraw. Rodgers took Simmons off the hook by throwing out McCraw at second on an attempted steal.

By now the out-of-town scoreboard showed that Luis Tiant and the Cleveland Indians had defeated the first-place Twins, 3-2, at Metropolitan Stadium. Also, Detroit was in the process of sweeping a twi-night doubleheader from the Kansas City Athletics at Tiger Stadium. Boston was idle, so these results put additional pressure on the Angels and White Sox.

In the Angels’ 11th, Mincher poked a one-out double to left, and pitcher Clyde Wright ran for him. Held walked and Morton knocked an RBI single to right that plated Wright with the first run of the game as Held scampered to third. Right-hander Bob Locker replaced McMahon, and got the switch-hitting Rodgers to ground to Hansen at short. The only play was at first, and Held scored to make it 2-0.12

With the White Sox down two runs, Agee lined a leadoff double to right-center in the bottom of the 11th. Simmons was relieved by right-hander Jack Hamilton. The hard-throwing Hamilton had made national news when he beaned Boston’s star right fielder, Tony Conigliaro, three weeks earlier in Fenway Park. Conigliaro suffered season-ending injuries. Pinch-hitter Rocky Colavito flied out, leaving Agee stalled at second. Forty-year-old Smoky Burgess, who was batting .120 and had not hit safely since July 25, sliced a double down the left-field line to score Agee.13 Bill Voss ran for Burgess and Hamilton walked Josephson. On came righty Bill Kelso, who walked Berry to load the bases. Right-hander Pete Cimino entered as the fourth Angels’ hurler of the inning. Cimino’s high and inside pitch to Hansen glanced off Rodgers’ mitt for a passed ball and allowed Voss to come home with the tying run. Cimino struck out Hansen and walked Causey. Buford laced a liner to left-center, but Morton snagged it on the run just off the outfield grass.14

Back to scorecard markups in the top of the 12th as Colavito went to left field while Berry switched back to right. Rookie Chicago right-hander Fred Klages allowed a leadoff single to Rodriguez. After Fregosi’s sacrifice, Klages retired Hall and Bill Skowron to keep the lead run on second. Cimino and Klages dispatched all of the hitters they faced during the bottom of the 12th and the top of the 13th.

After Cimino struck out pinch-hitter Marv Staehle to start the bottom of the 13th, Josephson followed with a single. Berry then boomed a long drive to left that Morton gloved on the first bounce. As Morton moved to his left, he slipped and fell, allowing Josephson plenty of time to score from first base15 to win the 4-hour-43-minute marathon at 12:47 A.M.16 The teams used 39 players, and California employed six pitchers to Chicago’s five. Klages (4-3) was credited with the win, and Cimino (3-3) took the loss.

With the 3-2 walk-off victory, the White Sox tied the Twins for first-place at 78-61. The Red Sox and Tigers were a game behind with records of 79-62.17 The Angels were in fifth place, 6 games from the leaders.

In addition to the sources cited in the Notes, the author accessed Retrosheet.org, Baseball-Reference.com, Newspapers.com, SABR.org/bioproj, and The Sporting News archive via Paper of Record.

17 The White Sox went 11-12 the rest of the way to finish in fourth place at 89-73, three games behind the pennant-winning Red Sox.