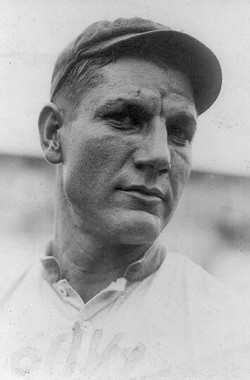 After the Brooklyn Tip-Tops rallied for a one-run victory over the visiting Pittsburgh Rebels in the first game of a Labor Day doubleheader, Brooklyn fans were treated to another come-from-behind one-run victory in the second game.

In addition to a five-run rally by the Tip-Tops in the bottom of the eighth inning, the second game was highlighted by a couple of firsts:

The Tip-Tops’ starting pitcher in the second game was future Hall of Famer Mordecai Brown, who was making his home debut for the Tip-Tops.

The second “first” was subsequently described as the “most novel win baseball has yet known.”1

Tip-Tops reliever Jim Bluejacket, who got just one out, was the winning pitcher in the second game. The novelty? The 27-year old Bluejacket got the out without retiring a hitter or throwing a pitch to the plate.

“He stands today, the only pitcher that has ever won a ball game without pitching even so much as one ball to a batsman. Bluejacket can treasure a record of the game as the queerest freak the great American game has ever known.”2

Bluejacket’s victory couldn’t have happened in the American or National Leagues. The rules of those leagues stated that “when a pitcher is announced he must pitch at least one ball to a batsman before he could be taken out of the game.”3

The circumstances were confusing for some because “the same rule was in vogue in the Federal League at the start of the season.”4

Apparently, “some of the players did not know that the rule had (recently) been rescinded.”5

When Tip-Tops infielder Jim Delahanty, who had been in the major leagues since 1901, was sent to pinch-hit for Bluejacket in the bottom of the eighth inning, he asked umpire Bill Brennan “if he could legally hit for Bluejacket, in that Jim had not pitched even one ball to a batsman.” Brennan informed Delahanty that it was all right.6

After the Tip-Tops scored two runs in the bottom of the seventh inning of the first game to rally for a 4-3 victory over the last-place Rebels, the Rebels rebounded early in the second game.

In the top of the seventh, the Rebels scored one run to make it 9-4, but the Tip-Tops responded in the bottom of the seventh with three runs to pull within two, 9-7.

Brooklyn’s Rudy Sommers retired the first two Pittsburgh hitters in the top of the eighth before the Rebels made it 11-7, scoring two runs on a single by Jimmie Savage, a double by Rebel Oakes, an error by shortstop Al Halt, and a single by Steve Yerkes.7 Yerkes was 3-for-3 in the game. The situation prompted Tip-Tops manager Bill Bradley to summon Bluejacket to relieve Sommers.

Without making a pitch, Bluejacket picked Yerkes off first base for the third out. (Yerkes had also been picked off first in the fifth inning by Sommers.)

In the bottom of the eighth, Rebels reliever George LeClair quickly retired Grover Land and Delahanty, batting for Bluejacket, on groundouts. But George Anderson started the comeback with a single — his third hit of the game. Claude Cooper followed with a triple to center to score Anderson. Al Shaw drew a walk, then Steve Evans’ single scored Cooper, making the score 11-9 and chasing LeClair.

Howard Camnitz was brought in to face Solly Hofman, who reached on an error by Rebels second baseman Jack Lewis, loading the bases. Tex Westerzil followed with a triple to clear the bases and give the Tip-Tops a 12-11 lead.

In the top of the ninth, the Rebels got a one-out single by first baseman Hugh Bradley. But Tip-Tops reliever Happy Finneran got pinch-hitter Ed Lennox to fly out to Shaw, who threw to first baseman Evans for a game-ending double play.

Both Three-Finger Brown and Bluejacket had recently joined the Tip-Tops after controversy.

Brown had started the season as player-manager of the St. Louis Terriers. After a loss to Baltimore on August 21, he was replaced as the manager by Fielder Jones. Brown, who was in his 12th major-league season as a player, told the club he would not remain with the team as a pitcher if he wasn’t managing. On September 1 the Federal League office announced that the Tip-Tops had taken over Brown’s contract.

Bluejacket, in his sixth professional season, had started the season with Bloomington of the Class-B Three-I League. In late July, Bloomington reportedly sold Bluejacket’s contract to the New York Giants with the idea that he would report to the John McGraw-managed Giants at the end of the Three-I League season on August 27. But after Bluejacket, who was 20-4 with Bloomington, pitched for the team on July 30, he left and joined the Tip-Tops.

The Giants, who claimed Bluejacket had agreed to a two-year contract, considered pursuing legal action. Tip-Tops President Robert B. Ward said, “If the Giants can show the priority of claim to his services they can have him. But they will not show any priority right. Bluejacket accepted our terms in June, long before the Giants ever heard of him. I have both a letter and a telegram from him with which I can prove if it is desirable to do so.”8

The Giants did not pursue any legal claim to Bluejacket, who made his Brooklyn debut on August 6, pitching seven shutout innings in the Tip-Tops’ 2-0 victory over the Kansas City Packers.

After the doubleheader sweep, the Tip-Tops were in fourth place with a 64-58 record, 4½ games behind first-place Indianapolis (70-55). The next day, the Tip-Tops completed a six-game sweep of the Rebels and on the day after that defeated St. Louis to improve to 66-58 and move within 3½ games of Indianapolis.

But the Tip-Tops then slumped, losing seven of their next eight. From September 10 until the end of the season (October 10), they won just 11 of 30 games as they finished in fifth place with a 77-77-3 record.

The Rebels, who were 50-71 after the holiday doubleheader, finished the season in seventh place with a 64-86-4 record.

In addition to the sources cited in the Notes, the author also consulted Baseball-Reference.com, Newspapers.com, Retrosheet.com, and sabr.org.