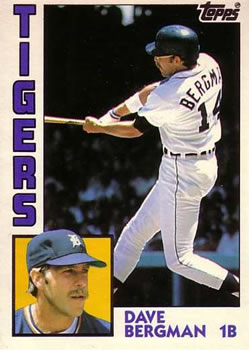 As dominant as the Detroit Tigers were during the 1984 season, the Toronto Blue Jays stayed within reach until the final month. For much of the year, the Blue Jays were the second best team in baseball, and the biggest threat to spoil the Tigers’ historic 35-5 start. When the two teams first met, in June, in Detroit, the Jays drew within 3½ games in the AL East. At the All-Star break, only the Tigers and Blue Jays had won at least 50 games. In their eighth year of existence and what would be their second season over .500, the Blue Jays were mounting their first real run at a division title.

When the teams met in early September, it was the Blue Jays’ last stand. The Tigers were up by 8½ games, and although they couldn’t clinch the division in Toronto, winning the series would leave little room for doubt.

The Tigers, though, had limped through a 16-15 August and a 2-3 start in September. “We're going through one of those spells,” manager Sparky Anderson wrote in his diary of the 1984 season. “I’ve always said the hardest thing to do is to close the door.”1

“We had lost three consecutive series and six of nine games,” recalled pitching coach Roger Craig in his own diary of the season. “We had been dealt a serious blow by … injuries to [Chet] Lemon and [Dave] Bergman and the illness of Kirk Gibson. Our spirits were sagging, our doubts increasing.”2

Toronto, meanwhile, had won 10 of its last 14 games. The Tigers’ 12-game lead in late August was down to single digits, and a sweep or series loss could make it a race down the wire.

“Right now I can see that our guys are getting concerned,” Anderson wrote. “They keep looking back [in the standings] at Toronto. To be honest, it’s got me concerned too.”3

Sparky stayed concerned for most of the opening game of the series. In the bottom of the third inning, Jesse Barfield led with a single and then came home on a comedy of Tigerserrors.

“Alfredo Griffin put down a fine bunt. [Catcher Lance] Parrish scooped it up but threw wildly to first,” the Detroit Free Press reported. “Then Gibson compounded the error, misplaying the ball down the line in right. That allowed Barfield to score. Griffin hustled to third and scored on Damaso Garcia’s subsequent ground ball.”4 The Blue Jays led 2-0.

In the fourth, Willie Upshaw singled and Willie Aikens hit a two-run home run. Tigers starter Dan Petry would end up striking out the side, but he exited in the sixth inning with the Tigers down 4-0. The Free Press noted that Petry “couldn’t be blamed for all the Jays’ runs. The Tigers’ fielding was shoddy in spots, and his teammates didn’t give Petry offensive support.”5

Meanwhile, Toronto starter Doyle Alexander was shutting the Tigers out, holding them to four hits over seven innings. But as soon as he faltered, the Tigers pounced.

Bergman led off the eighth inning with a double, and Lou Whitaker walked with one out. After Alan Trammell flied out, Gibson came to bat. Gibson had missed two games with the flu and was still weak from dehydration. But before the game he predicted, “In the heat of battle, I’ll probably forget how bad I feel.”6With two on and two out in the eighth, Gibson crushed a three-run home run to cut the Blue Jays’ lead to 4-3.

After Alexander walked Parrish, he was pulled for Jimmy Key. The Jays’ bullpen had given the team headaches all year and this game would be no different. Key gave up a single to pinch-hitter Barbaro Garbey and gave way to Roy Lee Jackson. Jackson walked the next two batters – Larry Herndon, to load the bases, and Lemon, to tie the game. Jim Gott came in and retired Bergman, who was batting for the second time that inning. But the Tigers had rallied all the way back from four runs down.

The Tigers threatened in the ninth when Gibson came up with one out and runners on first and third, hoping to reprise his heroics. Instead, he hit a grounder to second, and Garcia threw home to cut down pinch-runner Rusty Kuntz and snuff out the threat.

In the bottom of the ninth, the Blue Jays put the winning run aboard when Cliff Johnson led off with a single. Ron Shepherd ran for Johnson. After a pickoff attempt by Hernandez, Tigers pitching coach Roger Craig sensed that Shepherd was going to steal. “Shepherd returned to the base safely, but I detected him leaning toward second a bit,” Craig wrote. “That was my tipoff.”7 He called for a pitchout and the Tigers caught Shepherd stealing.

The game headed to extra innings. In the top of the 10th, the Tigers got back-to-back singles with one out, by Mike Laga and Lemon. That brought up Bergman, looking for his fourth hit in his first game in more than a week.

Back on June 4, Bergman had been the 10th-inning hero against the Blue Jays in Detroit, battling Jackson for 13 pitches before hitting a walk-off three-run home run. It was a season-defining win, and an at-bat for the ages. The game is remembered simply as “The Dave Bergman Game.”

“I got a fastball up in the zone,” Musselman said afterward. “He drove it – God.”8

Willie Hernandez closed out the bottom of the inning, allowing only a walk, to finish three one-hit innings of relief. The Tigers had rallied on the road to beat their closest division pursuer with two dramatic home runs.

“I wouldn’t say it to the writers after the game,” Anderson wrote. “But this one won it for us. This one put the nail in the coffin. It was the biggest game of the year for us. We did what we had to do – we stopped them in their home park. In my 15 years in the big leagues, this game ranks in my top 10.”9

“This game will stick in the Blue Jays’ craw when our champagne finally flows,” Craig wrote. “We battled back from a 4-0 deficit in the eighth inning tonight and won in the 10th, 7-4, on a three-run home run. ... Our entire team was overcome with joy and relief.”10

“This game restored our confidence,” Craig added. “Tonight [we] took a big step toward the championship.”11

In addition to the sources mentioned in the Notes, the author consulted Retrosheet.org and Baseball-reference.com.