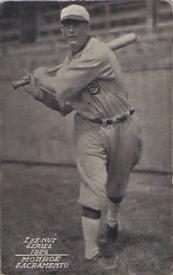 Joe Oeschger, the ace of the Boston Braves pitching staff, cruised through the first eight innings of the opening game of a Thursday afternoon doubleheader at Braves Field. He gave up just three hits to the last-place Philadelphia Phillies, as he propelled the fourth-place Braves to a comfortable 6-0 lead going into the top of the ninth inning. However, Oeschger suddenly lost his mojo, as the Phillies unexpectedly rallied for eight runs to defeat the Braves, 8-6.

“The defeat came like a bolt of lightning out of a clear sky,” James O’Leary of the Boston Globe described the unanticipated turn of events.1 Instead of racking up his 21st pitching victory of the season, Oeschger was saddled with his 12th loss.

In the top of the ninth inning, Oeschger gave up three straight singles to Dots Miller, Bevo LeBourveau, and Cy Williams that produced the first Philadelphia run. Ed Konetchy then doubled to score two more runs and narrow the Boston lead to 6-3. After Lee King flied out, Oeschger walked Frank Parkinson and then yielded a run-scoring single to John Peters that cut the Boston lead to 6-4.

The game should have ended with the next batter, Russ Wrightstone, who pinch-hit for pitcher Jesse Winters. Wrightstone grounded to second baseman Lloyd Christenbury, who initially fumbled the likely double-play ball and then threw wildly to first base to allow a fifth Philadelphia run to score.

Braves manager Fred Mitchell finally replaced Oeschger at this juncture, bringing Hugh McQuillan into the game to relieve him. McQuillan was no more effective than Oeschger, though, as John Monroe batted in the tying and go-ahead runs. Monroe made the second out of the inning when he was thrown out trying to steal second base. Miller, up for the second time in the inning, then walked and scored Philadelphia’s eighth run on LeBourveau’s triple to right-center field. The inning mercifully ended for the Braves when LeBourveau was thrown out at home plate trying to stretch his triple into an inside-the-park home run.

Huck Betts, in relief of Winters, shut down the Braves in the bottom of the ninth inning to preserve the Philadelphia victory.

Among the Boston sportswriters, there was some second-guessing of Mitchell’s ninth-inning pitching decisions, in an era when relief pitchers were not yet the specialists of today and starting pitchers were expected to finish the game. Paul Shannon of the Boston Post called it “criminal negligence” that Mitchell left Oeschger in the game too long, writing that “after the first three men up hit safely and the fourth connected for a solid two-bagger, Oeschger should have been relieved.”2 However, O’Leary of the Globe excused Mitchell’s tardiness in replacing Oeschger, writing that “Mitchell did not wish to humiliate him by sending in another pitcher after the wonderful work he had done in the previous eight innings and thought he might pull through.”3 O’Leary also noted that Oeschger, who had led off the bottom of the eighth inning with a base hit – his fourth hit of the game – “was loafing around on the bases with no sweater on and undoubtedly cooled off.”4

There was little criticism of second baseman Christenbury, who botched the potential game-ending double-play ball, even though the 27-year-old journeyman was substituting for the Braves’ regular second baseman, Hod Ford. “Mitchell benched Walter Barbare and put Ford at short and Christenbury at second,” Gus Rooney wrote a week later in The Sporting News. “The new middle diamond combination was mostly responsible for the Braves’ [recent] success.”5

Christenbury was a good-hit, no-field utility player who had played just a handful of games at second base that season. Christenbury was the leading hitter for the Braves at the time (.446 batting average), but was next to last in defensive prowess (.898 fielding percentage).6 True to form, Christenbury went 4-for-5 at bat in this game, but committed two of the team’s three errors.

Boston won the second game of the doubleheader, 13-2 behind Walter Holke’s four hits and four RBIs and Mule Watson’s seven-hit complete game, which became the theme deployed not only in the Boston Globe headline (“Phils Land Opener in Ninth, Then Lose”) but also in most wire-service accounts of the twin bill reported in newspapers across the country. The New York Tribune had one of the more colorful headlines: “Oeschger Collapses and Phils Overcome Six-Run Advantage.”7

The ninth-inning rally nearly escaped communication to readers of the Philadelphia Inquirer, which in the trend of the era did not send a writer to cover road games and depended instead on “Special to the Inquirer” dispatches written by a local writer who covered the home team. The Boston writer ghosting the article for this game focused on Oeschger’s “immaculate inning” in the fourth when he struck out three batters on just nine pitches.8

To supplement this story, the Inquirer sports editor commissioned a cartoon to better convey the ninth-inning rally to Philadelphia baseball fans who were interested in reading more than just the recap of the game at Shibe Park between the Philadelphia Athletics and the New York Yankees, who entered the day with a one-game lead in the American League pennant race over the second-place Cleveland Indians. Interestingly, the Athletics marshaled their own ninth-inning comeback, tallying two runs to overtake the Yankees, 6-5.

In addition to the sources cited in the Notes, the author consulted Baseball-Reference.com and Retroheet.org.

6 “Batting and Fielding of Red Sox and Braves,” Boston Globe, September 5, 1921: 7. These statistics are through games played on September 4, not through September 7, the day preceding this comeback game.