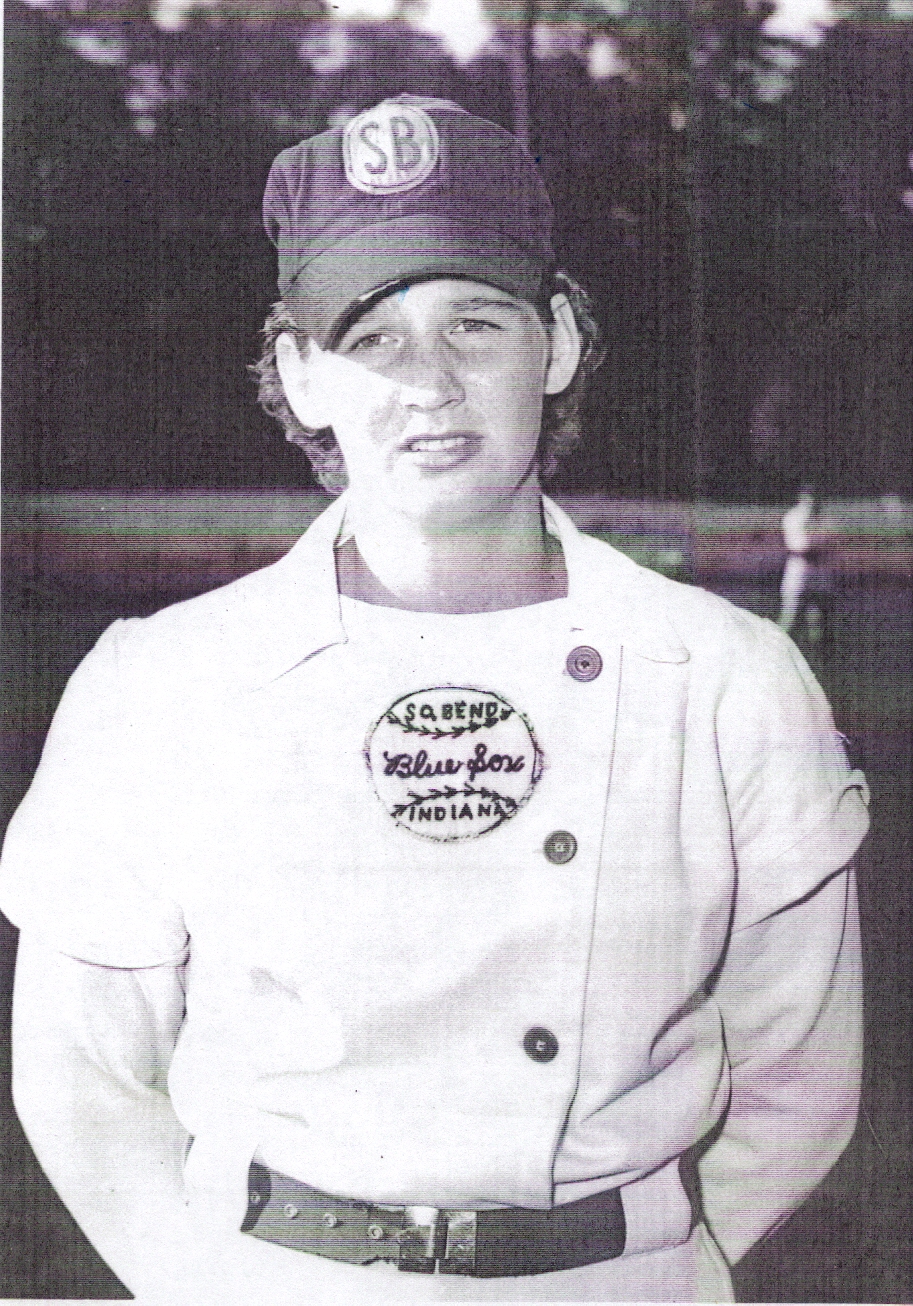 South Bend Blue Sox manager Karl Winsch was having none of it. After his team had lost Game One of the 1952 All-American Girls Professional Baseball League (AAGPBL) championship series in Rockford, Winsch went out and measured the distance of the recently-shortened right-field fence at Beyer Stadium.1 Sure enough, it was 21½ feet short of the minimum 210 feet distance mandated by league rules.2

When Rockford Peaches manager Bill Allington refused to discuss creating a ground rule for the short porch prior to Game Two, Winsch informed the plate umpire that the Blue Sox were playing the game under protest.3 The irascible manager had good reason to complain about the shortened right-field fence, which had been moved in to prepare for the start of the high-school football season.4 The Peaches featured a pair of dangerous left-handed power hitters, Eleanor Callow and Ruth Richard,5 while the Blue Sox did not hit a single home run from the left-handed batter’s box in the entire season.6

Allington responded with a protest of his own. After Winsch’s alleged mistreatment of second baseman Charlene “Shorty” Pryer (later Mayer) led to a six-player walkout near the end of the regular season, South Bend’s roster had been reduced to only 12 players for the playoffs.7 Since league rules stipulated that team rosters must consist of between 15 and 17 players, Rockford also played the game under protest.8

Callow had hit a two-run homer over the short right-field fence in Game One. Winsch’s ire was about to be raised once again.9 With the score tied, 2-2, in the fifth inning of Game Two, Rockford’s other left-handed slugger, Richard, hit a game-winning solo shot that barely cleared the right-field fence.10 Despite the glaring rule violations, the Game Two story in the Rockford Register-Republic predicted that it was “unlikely league headquarters would allow either protest.”11

As it turned out, the author of the article was wrong. The teams traveled to South Bend for what was thought to be the remainder of the series. The Blue Sox, down two games to none in the best-of-five series, were facing elimination – at least until early that evening. An emergency meeting was held before the game to consider the protests, and the league’s business manager, Earl McCammon, allowed the Blue Sox’ protest.12

The previous day’s win by Rockford was erased, and Game Three in South Bend suddenly transformed into Game Two. Game Five, if necessary, would be played on a field of Rockford’s choice, but it would not be at Beyer Stadium, which was no longer available to the Peaches.13

Allington selected Cuban hurler Migdalia “Mickey” Pérez Jinright as the Rockford starter in the new Game Two. The 25-year-old veteran right-hander had posted an 11-12 record and a 2.34 ERA in 1952.

South Bend countered with 19-year-old phenom Glenna “Sue” Kidd. The 5-foot-8, 165-pound righty had already spent three full seasons in the league after fine-tuning her pitching skills during the 1949 season with the Springfield Sallies developmental team.14 Kidd, who went 13-7 with a 2.00 ERA in the regular season, had a repertoire of mainly fastballs and sliders, augmented by curveballs that she could throw from different arm angles.15

Since the Blue Sox were trying to get by with a 12-woman roster, Kidd was one of three pitchers on the team being used as a two-way player in the playoffs. On days when they weren’t pitching, Kidd patrolled right field, Georgette “Jette” Vincent Mooney played second base, and Jean Faut was stationed at the hot corner. With Kidd on the mound in this game, Vincent Mooney and Faut were penciled into the starting lineup as position players.16

South Bend scored an unearned run against Pérez Jinright in the bottom of the first inning on an RBI single by Faut.

In the bottom of the third, Pérez Jinright surrendered another unearned run on a double, a sacrifice, and two more errors, the second of which was a wild pickoff attempt at first base by the Cuban pitcher.17

Kidd, meanwhile, was perfect on the mound through the first four innings.

Kidd was usually more comfortable toeing the rubber than she was in the batter’s box. The Arkansas native had hit only .188 in the regular season, and she came into this game 0-for-10 in the playoffs.18 Kidd snapped out of her batting skid in the bottom of the fourth by lashing a double. After being sacrificed to third, she scored on a single by Elizabeth “Betty” Wagoner. South Bend extended its lead to 4-0 on a stolen base by Wagoner and an RBI single by Josephine “Jo” Lenard. Once Pérez Jinright got the final out of the inning, her night was over, and Marie “Boston” Mansfield (later Kelley) came on in relief for the Peaches.

Kidd’s perfect game was snapped by a harmless single by Alice Pollitt Deschaine with one out in the top of the fifth.

South Bend held onto its 4-0 lead until Kidd’s shutout was broken up in the top of the eighth. Rockford cut the lead in half when second baseman Joan Berger (later Knebl) singled in a pair of runs.19

Callow led off the top of the ninth with a double, and with the potential tying run coming to the plate, Winsch gave Kidd the hook. With a full roster, Kidd would have headed for the bench, but instead she went out into right field. The move would be a key factor in determining the outcome of the game. Faut, who had been rocked in Game One, took over the pitching duties. She gave up three more singles in the inning, allowing Rockford to score a pair of runs and tie the score, 4-4.

Mansfield kept the Blue Sox off the scoresheet in the bottom of the ninth, sending the game into extra innings. Although the Rockford fireballer was wild, she didn’t give up a hit until there were two outs in the bottom of the 11th.20 The hit was insignificant, as South Bend failed to score for the seventh consecutive inning.

With one out and a runner on first in the bottom of the 12th, Mansfield issued her seventh walk of the game, this one to 18-year-old shortstop Gertrude “Gertie” Dunn. After a fielder’s choice put runners on the corners, Kidd stepped up to the plate with two out. The youngster came through in the clutch, stroking a single to give the Blue Sox a thrilling 12-inning walk-off victory.

Kidd was the hero of the game. Despite not being known for her hitting, she went 2-for-4 at the plate with a run scored, two sacrifices, and the game-winning RBI. Kidd hurled eight solid innings on the mound, limiting Rockford to three runs (two earned) on eight hits and no walks.

The South Bend victory capped a stunning turn of events. When the Blue Sox woke up in the morning, they were trailing two games to none in the best-of-five series, yet by the end of the night the series was tied at one game apiece. The defending champions were back in the series.

The next night, Rockford took a 5-1 lead after 4½ innings before South Bend fought back to make it close. Wagoner tried to score the tying run from first base in the bottom of the seventh inning on a long double to left-center field, but Callow got the ball back in to shortstop Dorothy “Snookie” Harrell Doyle, who relayed the ball to Richard at the plate, and she applied the tag to end the rally.21 Rockford held on for a 5-4 victory and the Blue Sox were once again facing elimination.

South Bend trailed 1-0 in the bottom of the seventh inning of Game Four when catcher Mary “Wimp” Baumgartner, pressed into action by the walkout of regular backstop Shirley Stovroff, laid down a perfect squeeze bunt to tie the score.22 Baumgartner eventually scored the winning run in the bottom of the 10th, forcing a deciding Game Five.

The Peaches chose to play the final game of the series at Read Park, a men’s softball facility with a seating capacity of 2,000 in Freeport, Illinois, about 30 miles west of Rockford.23 Faut was the star of Game Five, leading the Blue Sox to a 6-3 victory by breaking the contest open with a two-run triple in the third inning and tossing a complete game.24 For the second consecutive year, South Bend won the best-of-five championship series over Rockford after trailing two games to none.

The Blue Sox were awarded the championship trophy immediately after Game Five. McCammon, the administrator who upheld South Bend’s protest of Game Two, made the presentation. More than a few of the 2,700 fans in attendance booed McCammon for his decision three days earlier.25

Against all odds, South Bend’s “dutiful dozen” had pulled together to win the 1952 AAGPBL championship.26 The South Bend Tribune published a tribute to the Blue Sox, declaring that the team “won the league on just one basis alone – determination, the will to win.”27 There was one other factor that the newspaper neglected to mention: the skill and courage of the team’s trio of two-way players, especially the unflappable Kidd, who turned 19 the day the playoffs began.

In addition to the sources cited in the Notes, the author consulted AAGPBL.org and The All-American Girls Professional Baseball League Record Book. Unless otherwise noted, all play-by-play information for this game was taken from the article “Blue Sox Triumph on Field and at Conference Table” on page 19 of the September 9, 1952, edition of the South Bend Tribune. 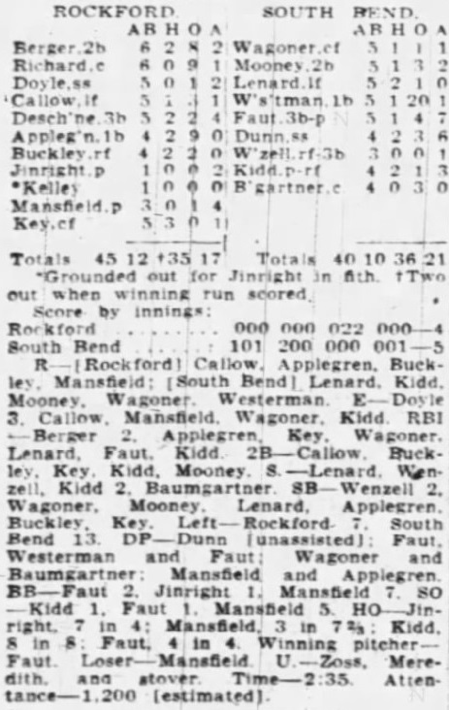 5 Both Eleanor Callow and Ruth Richard were named to the league’s All-Star team in 1952.

7 The six Blue Sox players who walked out were suspended by the team. Charlene “Shorty” Pryer was supported by five players: outfielder Jane “Jeep” Stoll, catcher Shirley Stovroff, first baseman and pitcher Dottie “Sporty” Mueller, third baseman Barbara Hoffman, and outfielder Elizabeth “Lib” Mahon. Stoll was the Blue Sox’ top offensive player. Pryer was the team’s regular second baseman, leading the league with 59 steals. Stovroff was South Bend’s regular catcher and a proven run producer. The walkout was costly for the players. Of the six who walked out, only Stoll and Mueller ever played another game in the AAGPBL. “Faut to Hurl Opener; Two Join Walkout,” South Bend Tribune, September 2, 1952: 16; Jim Sargent, We Were the All-American Girls: Interviews with Players of the AAGPBL, 1943-1954 (Jefferson, North Carolina: McFarland & Company, 2013), 191, 196.

12 The Rockford Morning Star reported that the decision was made to uphold South Bend’s protest prior to the game. The South Bend Tribune reported that the problem was “solved at the conference table during the early innings of the game.” “Blue Sox Top Peaches, 5-4, in 12 Innings; Erase Sunday Win; Series Evened”; “Blue Sox Triumph on Field and at Conference Table.”

14 The Springfield Sallies and Chicago Colleens toured the United States and Canada in 1949-50 to promote the league, attract new prospects, and develop the talent on the two teams.

16 Faut broke into the AAGPBL as a third baseman. She spent a significant portion of her career as a two-way player. Jim Sargent, “Jean Faut,” SABR BioProject, https://sabr.org/bioproj/person/jean-faut/, accessed February 21, 2022.

26 The South Bend Tribune referred to the Blue Sox as the “dutiful dozen” during the 1952 playoffs. “Blue Sox Tie Playoff Series with 2-1 Victory in 10th.”