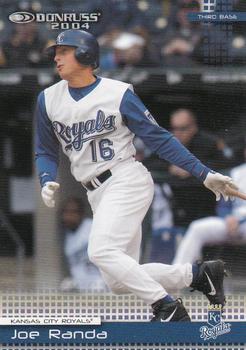 In the movie Field of Dreams, Ray Kinsella (Kevin Costner) tells Terrance Mann (James Earl Jones), “You once wrote, there comes a time when all the cosmic tumblers have clicked into place and the universe opens itself up for a few seconds to see what’s possible.” For the Kansas City Royals, those tumblers were in place for 3 hours and 11 minutes as they dismantled the Detroit Tigers 26-5 in the first game of their doubleheader on September 9, 2004. Later that day, they saw what happens when the tumblers are not in place.

For a team mired in last place in the AL Central Division on that day with a 49-88 record, the Royals could occasionally put some big numbers up on the scoreboard.1 On April 20 they plated 15 runs in Cleveland against the Indians. Just four days before this game, they scored 12 against the Twins in Minnesota. They even had a three-game stretch in which they beat the Atlanta Braves by identical 10-4 scores in mid-June. But nothing in their history would have allowed anyone to expect a 26-run performance. The Tigers, on the other hand, had some history in 2004 of allowing a few runs. Up until this game, the Tigers had allowed 10 or more runs 17 times that season, or one more time than they had given up either no runs or one runs.

It’s usually not going to be a good day for a pitcher when the first two outs he records in a game both drive in runs. This was the case for Tigers starter Jason Johnson, who started the game with consecutive walks. After an error loaded the bases. Matt Stairs drove in the first run with a sacrifice fly, and two batters later Calvin Pickering drove in Joe Randa, who had doubled after Stairs’ at-bat, also with a sacrifice fly. The second inning would start better for Johnson, who struck out the first two hitters, but a single by David DeJesus and a triple by Angel Berroa, followed by a wild pitch scoring Berroa, made the score 6-0. The Tigers attempted to stay in the game in the bottom of the second, with Craig Monroe hitting a home run with Carlos Guillén aboard to reduce the deficit to 6-2. But at that point the aforementioned tumblers clicked into place for the Royals.

Again, Johnson started the inning innocently enough with a groundout to first by Stairs. Randa followed with his second hit of the game, and after Pickering walked, a single by Dee Brown, double by Albert Castillo, and a walk to Ruben Gotay had plated two runs, loaded the bases, and sent Johnson to the showers. Perhaps he got off easy, as his departure led to the unfortunate major-league debut of Lino Urdaneta. Urdaneta was a September call-up for the Tigers after an unimpressive stint with Toledo of the International League, going 0-2 with a 9.69 ERA in 13 innings. Urdaneta’s first hitter was DeJesus, who walked, and then a parade broke out, as five consecutive Royals singled, including Randa’s third hit of the game (remarkably, the only hitter Urdaneta faced who didn’t record an RBI). As Tigers manager Alan Trammell came out to end Urdaneta’s day, he could have been excused for wondering if his debut was also going to prove his only appearance. It would be, at least for 2004.2 Urdaneta became the 77th major-league player to pitch but not record an out during a major-league season.3

The fun wasn’t over for the Royals even if Urdaneta’s outing was. The score was now 14-2, the bases were as loaded as they were when Urdaneta entered, and there was still only one out. Franklyn German was brought in by Trammell to stop the bleeding and he did, eventually. Brown and Castillo each recorded his second hit of the inning to bring the score to 17-2. German did induce Gotay (the only Royal not to get a hit in the third) to pop out to first, and DeJesus’s lineout to center ended the frame. The 13 consecutive hitters reaching base for the Royals tied an American League record.

Fans at the game could now be excused for wondering if they perhaps had something better to do with their day, but it was a doubleheader, and it was only the third inning of game one. The fourth inning was better for the Tigers as only two more runs scored. After a walk to Abraham Nunez, Randa started a smaller parade with his fourth hit of the game, followed by three more singles from Pickering, Brown, and Castillo to make it 19-2. At that point, the Royals decided to show some mercy: With Pickering on third, he chose not to advance on a wild pitch from German.4

Zack Greinke gave up a leadoff home run to Rondell White to start the Tigers fourth and gave up two more baserunners that inning. “It’s kind of tough to stay into the game,” he said afterward. “Not in the second inning when it’s 6-0. Especially after they made it 6-2. You know there’s still a good chance they could score some runs. When it got to 19, it was a different story.”5

Craig Dingman replaced German and in the fifth became the first Tigers hurler to record an inning without a run, but he got dinged up in the sixth. Randa led off the inning with his fifth hit. After Pickering struck out, Brown and Castillo walked to load the bases. Dingman got Gotay to pop out, but DeJesus doubled to right, scoring Randa and Brown.

Trammell brought in John Ennis to face Berroa, whose line-drive home run made the score 24-3. Royals manager Tony Peña decided to give Greinke the rest of the day off, bringing in Chris George, who gave up a run in the bottom of the seventh, just to keep things interesting. When Gotay doubled in the eighth to score Paul Phillips, he became the last Royals starter to record a hit and RBI in the game. Randa, who had struck out in the seventh inning, singled in the ninth, becoming the third Royal to record six hits in a game.6 He would make history two batters later. When he scored on Brown’s infield single after Pickering’s double, he became the first American League player to record six hits and score six runs in the same game. “Some of those hits had some eyes on them,” Randa said. “I think I got kind of lucky out there. Everyone was contributing, and it was just one of those things.”7

Once Mike MacDougal had finished up for the Royals, entering the game in the ninth in a decidedly nonsave situation, the Royals had set a team record, not only for runs in a game with 26 (eclipsing their old mark of 23 set in 1974), but for runs in a doubleheader, without the benefit of playing game two. Which was a good thing, as they were shut out for eight innings by Jeremy Bonderman and the Tigers, 8-0, in game two. “We got our clocks cleaned in the first game and shut ’em out in the second,” said Trammell after the second game. “How can you answer that? You can’t.”8

2 Urdaneta did not pitch again for the Tigers but was picked up by the New York Mets, for whom he recorded his first major-league out on May 6, 2007.

3 Understandably, the list of players who pitched but did not record an out includes some field players, including Stan Musial, who faced one hitter without recording an out in September 1952.

7 Dutton. Randa was also the first player to score six times with six hits in a game without the benefit of a home run. The two National League players who have accomplished this feat, Edgardo Alfonzo (Mets, August 30, 1999), and Shawn Green (Dodgers, May 23, 2002), hit three and four, respectively, in their games.