This article was published in 1964 Philadelphia Phillies essays

Rubén Amaro Sr. made a unique contribution to how the history of the 1964 Philadelphia Phillies was recorded. His letters to his parents (as first described in a 1965 article for Sports Illustrated, “The Rise and Fall of the Fabulous Phillies”) were a contemporaneous internal view of the club. 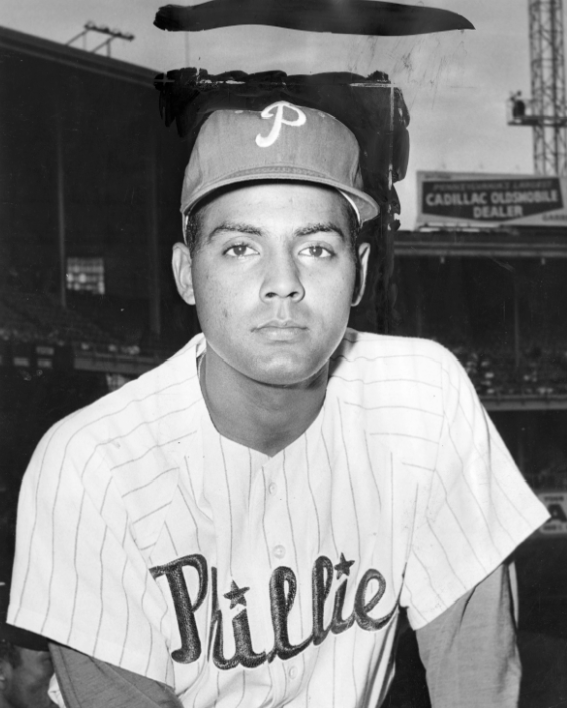 Rubén Amaro Sr. made a unique contribution to how the history of the 1964 Philadelphia Phillies was recorded. A March 1965 article by William Leggett for Sports Illustrated, “The Rise and Fall of the Fabulous Phillies,” originally told this story in part. “Ruben Amaro, the fancy-fielding 28-year-old infielder, began writing weekly letters to his mother and father, who live in a pale-blue two-story house in Veracruz, Mexico.”1 These epistles were an internal view of the club, not external; they were contemporaneous, not retrospective.

They also possessed a special spirit. As a 2003 article for the Philly Baseball Insider website described it, neatly paraphrasing another passage of Leggett’s story, “(H)is letters sent back home to his family in that oh so wonderful summer of ’64 were so poignant and captured forever what every Phillie fan was feeling. … Amaro sensed early on that this season was magical. The letters to father Santos and mother Doña Pepa spoke of a team poised and ready to play daily, well coached and alive with talent and spirit. The letters excited his family, and the city of Veracruz soon adopted the Phillies as their own!”2

Alas, “those letters are no longer in existence,” Amaro said in 2012. “Mima kept them until 1971 and then she cleaned house.” What survives are the glimpses from Leggett’s article – though we also have the benefit of Amaro’s memories. He discussed how writing home was not something that started just in 1964. “Always and often,” he said. His earnings as a ballplayer were modest, yet he had long helped support Mima and Pipo, as he and his brother Mario always referred to their parents. “I used to send them, by a cashier’s check or a bank draft, their money every paycheck.” Rubén Sr. also noted that he supplemented his letters with occasional phone calls – despite the expense.

Leggett showed that Santos Amaro sounded a cautious note about the pennant race, based on his own baseball experience (though the description just scratched the surface of the father’s career). In response to Doña Pepa’s questions about whether the Phillies would win, he replied, “Be calm, old girl. In baseball anything can happen.’ ”3

Santos refrained from giving his son any advice, though. Rubén said, “My dad knew through me that we had one of the best managers in baseball in Gene Mauch. He [Mauch] didn’t need any outside help.”

Leggett’s narrative continued, “The lead lengthened and Ruben Amaro began to dream dreams of the World Series. He wrote to Veracruz: ‘We are playing the best baseball of both leagues and nothing will stop us now. I want you and Mama and Teresa [Ruben’s 8-year-old adopted sister] to get ready to come to Philadelphia. I will wire you the money for the tickets, but you better start packing. …’ ”4

Indeed, Amaro ordered $1,800 worth of World Series tickets. The prices were $25 for a box seat, $17 for a reserved seat, and $9 for a bleacher seat.5 Since the National League pennant winner would be hosting four games (if the Series were to go to the full seven), that implied 18 strips of box seats. In addition to the Amaro parents and little sister Ana Teresa (fondly known as Ana Banana), other friends and family were invited. Rubén’s wife, Judy, was one of them, naturally, but his brother, Mario, was doing his medical internship at St. Joseph’s Hospital in Philadelphia.

Santos Amaro, however, remained circumspect. As author Frank Dolson wrote in his book about Jim Bunning, with 12 games left to go, “Ruben Amaro placed a long-distance phone call to his father. … Ruben wanted him to fly to Philadelphia, be part of the Phillies’ victory drive. …‘I remember my father saying, I don’t like to sound pessimistic or anything, but I wouldn’t really be sure of playing [in the World Series] until I know you have clinched the pennant.’ ”6

Rubén re-emphasized this point in 2012. “Pipo was not superstitious but very observant and respectful of the rituals of baseball. From the onset of the Phillies Fever, he wrote me and told me, ‘We are not getting on the plane until I know for sure or read in the paper: the Phillies are National League champions.’ ”

Instead, as Leggett described it, the Veracruz local paper Dictamen arrived at the Amaros’ home with the headline, THE CARDS WIN THE PENNANT. Doña Pepa broke down in tears for only the second time in her life, sobbing for her son. In his last letter of the season, Rubén vividly depicted the team’s struggle down the stretch and admitted, “Perhaps I planned too far ahead when I asked you to come to Philadelphia.”7 The notion of a jinx was not a factor in his mind either, though. He added, “Pipo was also just protecting my expenses.”

Santos and Pepa Amaro survived until 2001 and 2007, respectively. They both made it up to the US after 1964; Rubén said, “Both he and Mima traveled several times to see their sons and grandchildren. My father never gave up his Cuban citizenship. We all tried to make him Mexican. It was easier for him to travel anywhere with a Mexican passport.”

Rubén Amaro, Sr. never did get to a World Series as a player, though he was present as first-base coach when the Phillies finally triumphed in 1980. “We won and it was fabulous, extraordinary – but nothing ever is going to make up for our loss in 1964.” He drew a parallel with another team he served as coach, the 1984 Chicago Cubs, who won the first two games of the NL Championship Series that year but couldn’t close it out. “We had a banner year, but it was devastating at the end when we lost three games to San Diego and couldn’t go to the Series.”

The good Catholic summed it up this way: “When the saints turn their back, there is simply no way you are going to win.”

Except where indicated, all quotes are from e-mails from Rubén Amaro, Sr. (October 31 and November 1, 2012).

1 William Leggett, “The Rise and Fall of the Fabulous Phillies,” Sports Illustrated, March 1, 1965.

3 Leggett, “The Rise and Fall of the Fabulous Phillies.”

4 Leggett, “The Rise and Fall of the Fabulous Phillies.”

7 Leggett, “The Rise and Fall of the Fabulous Phillies.”