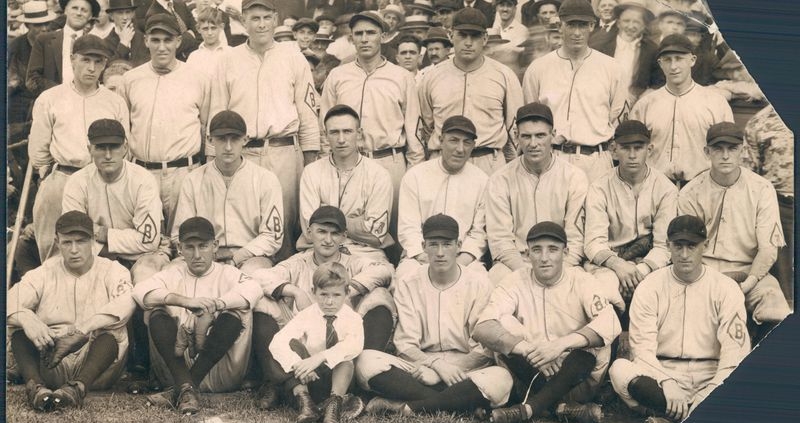 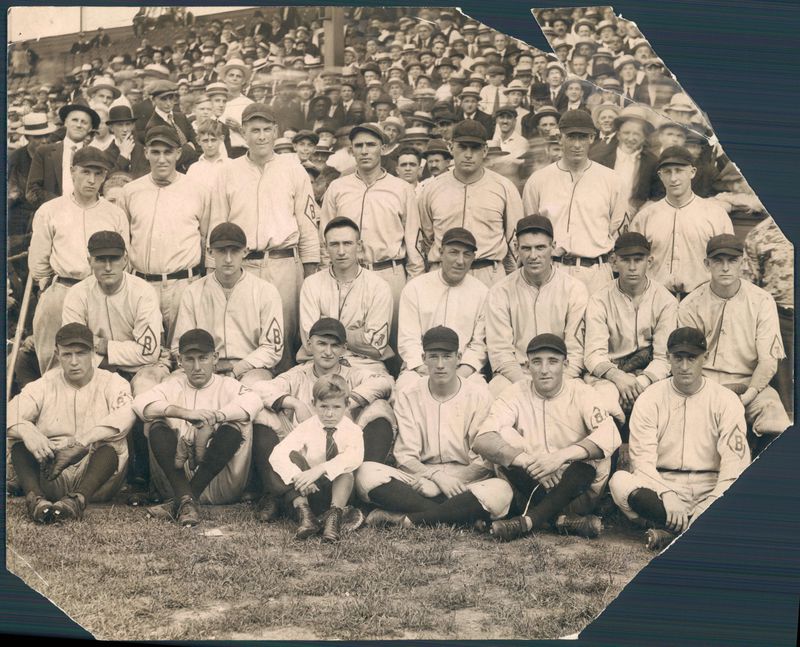 In 1920, the Baltimore Orioles were champions of the International League (IL) for the second straight year. Baltimore would win seven consecutive pennants (1919–25), and six of the championship teams are ranked in the top 20 of the 100 best minor league teams of the twentieth century by Bill Weiss and Marshall Wright.1 (See sidebar 1 below.)

Owner Jack Dunn had survived the invasion of the Federal League by selling off some of his players and hightailing it to Richmond, VA, then returning to Baltimore in 1916. He would create a minor-league dynasty, locking up his best players for years during a time when the IL was exempt from the major league draft. The man who had sold Babe Ruth to the Red Sox for a bargain price had learned his lesson, placing high price tags on players desired by big-league clubs. Dunn and 11 of his players are in the International League Hall of Fame. Only one player from the dynasty years made it to Cooperstown, and there should have been more. (See sidebar 2). This article will discuss these eleven players and the championship seasons of which they were a part.

Jack Bentley joined the Washington Nationals (nicknamed the Senators) at the end of 1913 and, in parts of four seasons, compiled a 6–9 record in 39 games as a pitcher. He was dispatched to Minneapolis of the American Association and, on August 18, 1916, was sent to Baltimore for the balance of the season. He was formally traded by Washington to Baltimore in early 1917 and was the cornerstone as Dunn rebuilt the Orioles.

Obtained by Dunn along with Bentley was Turner Barber, who was dealt to the Cubs in exchange for outfielder Merwin Jacobson, who starred with Baltimore from 1919 through 1924. Although his services had been secured prior to the 1918 season, Jacobson spent that year in Washington, DC, doing war-related work.

Bentley also came into his own as a hitter in 1916, and in 1917, batting .343. Suffering from arm trouble, he only appeared in one game as a pitcher. Baltimore improved to 88-61, finishing in third place, 2.5 games behind the league leaders.

Baltimore almost lost Bentley after the 1917 season. He was drafted by the Red Sox but entered the Army, serving with distinction in World War I. As 1919 began, he was still in France, and the Red Sox still had the rights to his services. Boston didn’t need Bentley at first base, as they had Stuffy McInnis. As Boston owner Harry Frazee hadn’t paid the $2,500 draft price for Bentley by February 1, Bentley returned to Baltimore.

In the abbreviated 1918 season, Baltimore continued to build. Otis Lawry, who had been obtained from the Athletics in a seven-player deal after the 1917 season, came into his own, batting .317. He played with the Orioles until midway through the 1924 season.

Eighteen-year-old Max Bishop was installed at third base in 1918. With Bentley still in Europe at the start of the 1919 season, Bishop played first base. His average through the season’s first eight games stood at .652 with seven extra-base hits.. Once Bentley returned, Bishop was moved to second base, and it was at that position that he would remain for the balance of his professional career.

New faces were on the left side of the infield in 1919. The shortstop was Joe Boley, who played in the low minors in 1916 and 1917 and did not play in organized baseball in 1918. He had taken a job at a plant with work related to the war effort in 1917, and he played on the plant’s semi-pro team in 1917 and 1918. One of his teammates in 1917 had been Bishop. Bishop suggested that Dunn sign Boley and the shortstop joined the Orioles in 1919.2

Fritz Maisel was popular with Baltimore when he played with them from 1911 through mid-1913. He was traded to the Yankees and was with them through 1917. He spent 1918 with the St. Louis Browns. His acquisition by Dunn as the team’s third baseman put another stone in place.3

Baltimore opened at home against Rochester on April 30, 1919, with Rube Parnham pitching. The 25-year-old had gone 38-19 with Baltimore over the prior two seasons, but until January 16, 1918, was property of the Philadelphia Athletics. He had appeared briefly, in a total of six games, with Philadelphia in 1916 and 1917. Parnham was Baltimore’s top pitcher in 1919, going 28-12.

Bentley returned to Baltimore on June 21, 1919. On his first day in the lineup, he started the second game of a doubleheader against Rochester and went 3-for-5 with a sixth-inning homer.4

Baltimore won the IL pennant by eight games. After the season, Baltimore did not participate in the Junior World Series, which was contested that year between the champions of the American Association and the Pacific Coast League.

Late in 1919, Dunn ensured the future success of the team by signing his stars to two-year contracts. He demanded top money for his players, including a man who came on board during the 1920 season: Robert Moses “Lefty” Grove. Only 20 years old, Grove got his professional start in 1920 with Martinsburg, West Virginia in the Class D Blue Ridge League. His 1.68 ERA and 60 strikeouts in 59 innings aroused the interest of Dunn, who secured Grove’s services.

Grove joined Baltimore in late June and won his first two outings. In his first appearance, on July 1, he defeated Jersey City 9-3 in the second game of a doubleheader giving the Orioles a one and a half game lead in the league standings. He allowed five hits in the abbreviated seven-inning contest. Three days later, he defeated Reading, 8-1. He scattered seven hits, struck out eight, and, in the fourth inning, struck out the side.5

Baltimore won its last 25 games to set an IL record. Their season’s record of 110-43 barely eclipsed Toronto’s 108-46 mark. In the best-of-nine JWS, Baltimore defeated American Association champion St. Paul in six games for the first of three JWS titles. Bentley’s two homers won Game One, 5-3. He let his arm do the work in Game Three, winning 9-2 to put the Birds within two games of the series win.6 After the Saints broke into the win column in Game Four, the teams traveled to Minnesota. Bentley was back on the mound, winning 6-5 in Game Five, a triumph marred by fan hostility to umpire Otis H. Stocksdale for calling Lawry, who had bunted, safe at first in an inning where the Orioles scored the game’s decisive run. In the same inning, St. Paul pitcher Dan Griner was accused of throwing a shine ball, and a further ruckus ensued.7 The Orioles clinched the series in Game Six. Ogden pitched a 1-0 shutout and Boley’s home run was the only offensive support needed. 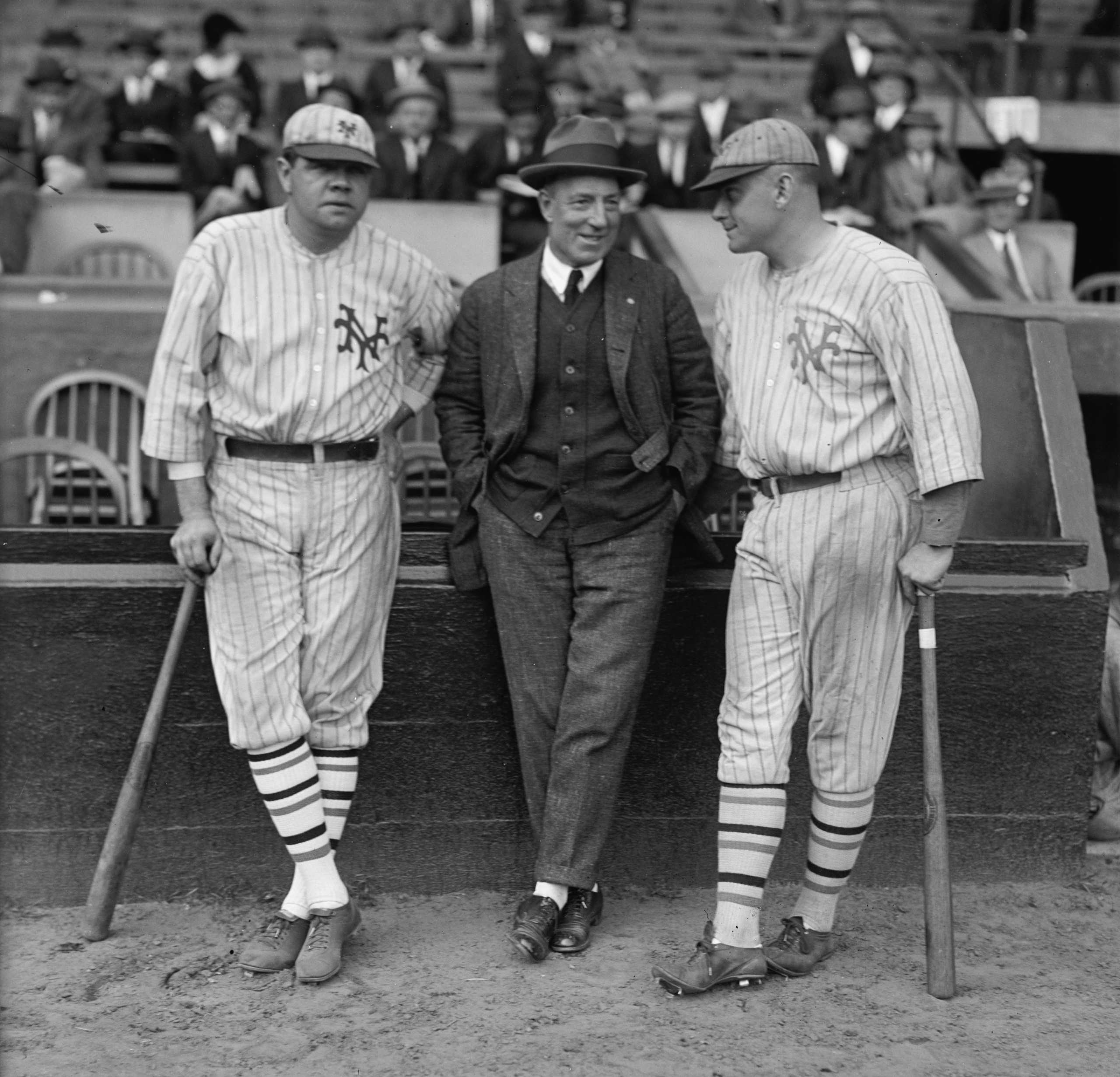 Babe Ruth in a borrowed New York Giants uniform, with his former owner Jack Dunn (and Giants player Jack Bentley), before the October 3, 1923, exhibition game between the Giants and the Dunn’s International League Orioles. Ruth, who was a star with the Yankees by then, was enticed to play to be a gate draw. The game’s proceeds went to fundraising for former Giants owner John B. Day and former manager Jim Mutrie. (LIBRARY OF CONGRESS)

In 1921, Dunn added pitcher Tommy Thomas. Thomas racked up 105 wins in five seasons with the Orioles before being traded to the White Sox for Maurice Archdeacon late in the 1925 season. The deal was announced on September 12, 1925, and Thomas, after spending the balance of the season with Baltimore, joined Chicago for the 1926 season.8

Bentley batted .412 with 24 home runs and 120 RBI. His batting average is the IL record. He set a league record of 246 hits that still stands and led in doubles (47), total bases (397) and slugging average (.665). The 24 homers were a league record at the time. On the mound, Bentley was 12-1 with a 2.35 ERA. Being left-handed and with these statistics, it is not surprising that he was starting to be called “The Babe Ruth of the Minors.”9

Baltimore lost the 1921 JWS to Louisville in eight games.

The Orioles returned to the Junior World Series in 1922, defeating St. Paul, five games to two.

Grove was 27-10 with a league leading 330 strikeouts. Parnham, who had rejoined the team in 1922, was 33-7 in his last great season. In the JWS, Baltimore lost to Kansas City in nine games.

In 1925, three pitchers won at least 28 games. The team’s leader in wins was Thomas with 32. Earnshaw, in his first full season, won 29. Ogden won 28. Baltimore’s 188 homers were tops in the league. In the JWS, Baltimore defeated Louisville in eight games.

The dynasty would yield ten inductees to the International League Hall of Fame in a steady stream of inductions between 1948 and 1963, with an eleventh, Grove, added in 2008 (after his induction to Cooperstown). Dunn’s Orioles would never again have the glory of those seven great seasons.

ALAN COHEN has been a SABR member since 2010. He serves as Vice President-Treasurer of the Connecticut Smoky Joe Wood Chapter and is datacaster (MiLB First Pitch stringer) for the Hartford Yard Goats, the Double-A affiliate of the Colorado Rockies. His biographies, game stories and essays have appeared in more than 40 SABR publications. Since his first Baseball Research Journal article appeared in 2013, Alan has continued to expand his research into the Hearst Sandlot Classic (1946-1965) from which 88 players advanced to the major leagues. He has four children and eight grandchildren and resides in Connecticut with wife, Frances, their cats Morty, Ava, and Zoe, and their dog, Buddy.

Orioles Inductees to the International League Hall of Fame

*Also inducted into the National Baseball Hall of Fame in Cooperstown.