This article was published in The National Pastime: The Future According to Baseball (2021) 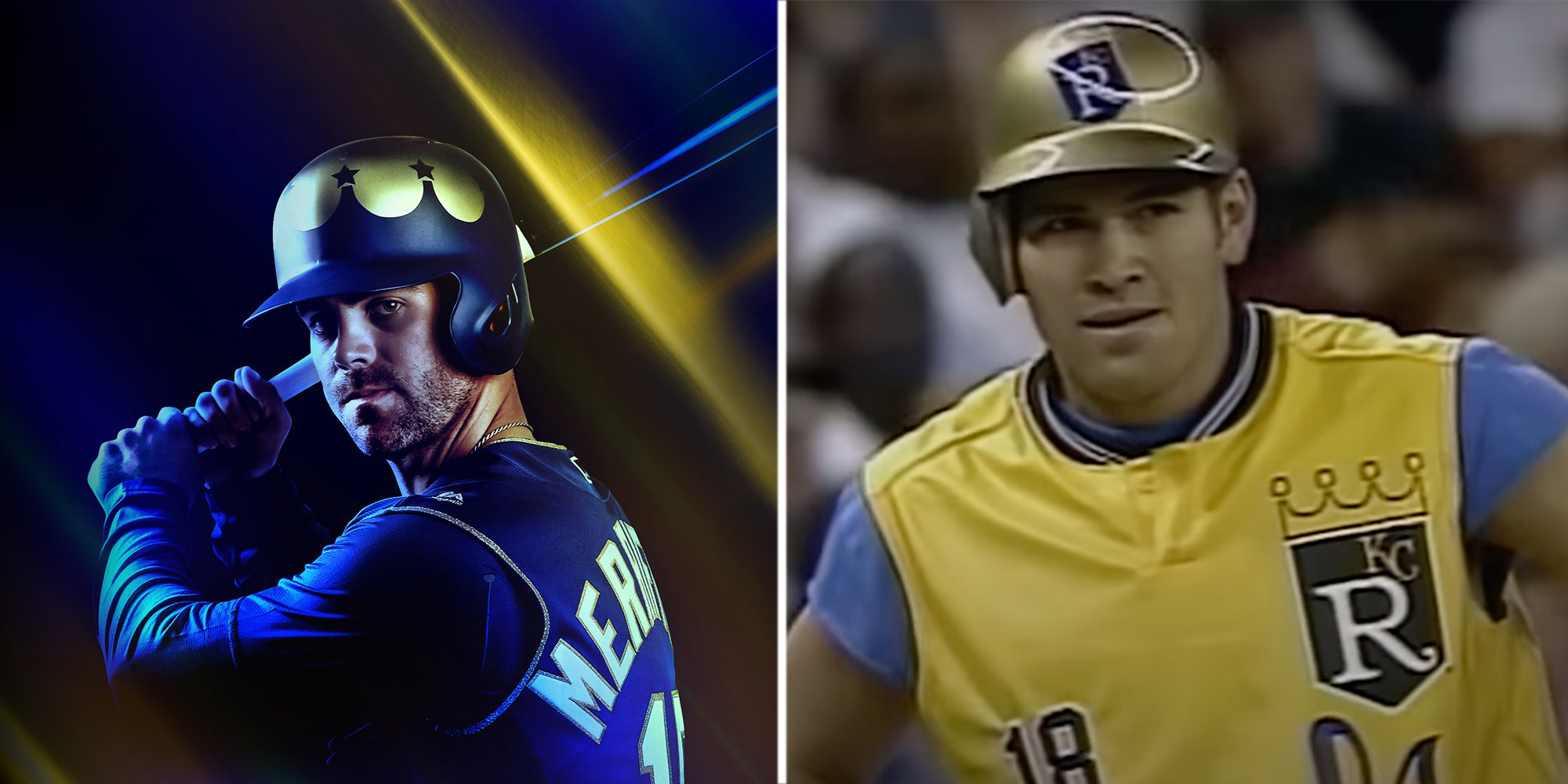 The Kansas City Royals had so much fun on Turn Ahead the Clock Night, they decided to bring the promotion back for its 20th anniversary in 2018. Pictured here are (L) Whit Merrifield in 2018 and (R) Johnny Damon in 1998. (KANSAS CITY ROYALS)

Imagine you are sitting in a ballpark in the year 2040, and you are noting the uniforms of the two teams on the field. Can you imagine what baseball uniforms might look like twenty years from now?

For some perspective, let’s turn the clock back to the late 1990s, when what baseball clothes might look like in the future became more than just an idea. Baseball uniforms of the future became a hot topic thanks to “Turn Ahead the Clock Night.”1 Originating with the Seattle Mariners in 1998 as a one-night promotion, “Turn Ahead the Clock” went national in 1999 as a promotional gimmick between MLB and real estate company Century 21. Twenty-two of the 30 major league teams took part in the promotion by wearing their version of futuristic uniforms for one game. “We don’t know what 2021 will look like,” admitted Joe Billetdeaux, the Pirates director of merchandise. “We took a stab at it.”2 The results were not widely praised. The attempts at a futuristic look included jerseys with colors described as “blinding,”3 silver batting helmets, capped jersey sleeves, and jersey numbers and players’ names crawling vertically down the back.

A decade and a half earlier, the Mizuno Corporation of Osaka, Japan, had introduced their style of a futuristic uniform that focused on a baseball player’s needs. The one-piece uniforms were made from an all-weather polyurethane material—the same fabric used in ski outfits—and were designed to keep players warm on a chilly day or cool on a hot day. The major selling point of this uniform was the reinforced padding in areas where it was most needed. For example, an infielder’s uniform would have extra padding in the knee and shin areas to protect them from being spiked by a baserunner. The Mizuno style uniforms appeared to make an impression when unveiled in February of 1983, but because equipment and uniform changes had to be approved by the rules committee, it was said that it would be a while before these uniform would be in the major leagues; however, a Mizuno Corporation representative said he hoped to test the new uniforms during the current college baseball season.4 If the rules committee ever had their say or if college teams tried out the futuristic uniforms was never recorded.

So, if the far-fetched uniforms designed by the Mizuno corporation and the out-of-this-world style worn for the Century 21 promotion are unlikely to be adopted by Major League Baseball, what could we see the two teams wearing at that game we attend in 2040? Anne Occi, who was hired to start the MLB Properties design department in 1990 and became “MLB’s defacto chief marketing officer,”5 came to the job with ideas about what would influence baseball uniforms in the future. As part of her job, she subscribed to trend reports and color forecasts, paid attention to demographics, and listened closely when club management would tell her what kind of look they were looking for. “We know for a fact that the navies are starting to take over the popularity of black,” Occi said of the mid-1990s trends, “and there’s a switch from silver to gold metallic, and to less shiny metallic, such as bronze, and green is the color of the ’90s.”6 Occi recently retired after thirty years at MLB, but her successors will likely continue trying to predict color trends.7

Other factors could play a role in the baseball uniforms of 2040. According to author Marc Okkonen, night baseball inspired shiny satin material on game uniforms. Games televised in living color led to the rise of uniforms with bright colors and multiple color schemes. The popularity of America’s space program and putting men on the moon led to a fascination with the future and new trends in baseball uniforms in the Space Age. Some teams replaced traditional road grays with light blue, and button-down jerseys were replaced by pullovers. Teams like the Oakland A’s went so far as to replace traditional black cleats with white cleats. But that only lasted until nostalgia itself became a trend. In the late 1980s and early 1990s, perhaps inspired by the movie Field of Dreams, love of nostalgia blossomed, and baseball teams began to go back to gray road uniforms, old logos, and a traditional uniform look.

Events and milestones can also play a role, such as when every player in the American and National Leagues wore a sleeve patch in 1939 to honor the invention of baseball, or in 1918, when World War I inspired patriotic fervor and an abundance of flags and red-white-and-blue shield patches appearing on uniforms. In 1942, World War II inspired teams to wear a patriotic patch with the word, “Health.” Perhaps an event or milestone will inspire the jerseys you see at that game in 2040, or it could be something unimaginable for purists, like multiple patches. Perhaps individual uniforms will be spotted with patches like NASCAR drivers’ uniforms. This might sound outrageous, but who would have ever predicted that the White Sox would wear Bermuda shorts for three games during the 1976 season?

The thought of baseball uniforms becoming billboards might make you laugh, but you may have noticed that in the 2021 season the Nike logo sits visible on the chest of every major league player. The topic of advertising on the uniform was in discussion back in 1999. According to Chicago Tribune writer Chip Scoggins, “Major League Baseball [sic] and the Players’ Association are discussing a plan that would allow teams to sell 1-to-1 1/2-inch square patches containing a company’s logo.”8 The 1999 proposal was met with disdain from traditionalists—with pitcher Mike Mussina likening it to the Bad News Bears being sponsored by Chico’s Bail Bonds—and it went nowhere. But “for a cool $1 billion”—about $3 million per team—MLB did add the Nike swoosh in 2020, and it will stay there through the 2029 season.9 And the patch idea that was shelved in 1999? It was revived in 2019, with a tiny patch on the uniforms of the Yankees and Red Sox during their London Series, and is now being discussed between MLB and the players in advance of the next collective bargaining agreement.10 Seems likely that unless there is measurable backlash, MLB uniforms will be decorated with patches of sponsorship at that 2040 game you attend.

Fashion in 2040 also might be entirely different from anything we can predict. Factors such as COVID-19 influenced fashion in ways we couldn’t have previously imagined: masks are now a new norm in people’s wardrobes. The sleek form of smartphones and other tech devices may lead us back to the color schemes of metallic and black or navy, or perhaps baseball uniforms will be going through another nostalgia phase, with teams wearing throwback uniforms. Maybe it will be a fashion that is optimized for viewing technology that will allow you and the other spectators to see the uniforms in a form other than what they really are. For example, a ballplayer might be wearing the home white uniform, but when the onlookers have their VR headsets on or look through a lens, the uniform may appear to change color or even provide information to the viewer. Perhaps future uniforms will be marked with the dynamic strike zone, whether visible to the human eye or only to the “robo umps.”

While it may be impossible to predict how baseball uniforms will look in the year 2040, one thing you can count on is that uniforms of the future will make every attempt at safety and comfort. While you are sitting in the stands at that game in 2040, you can bet that there will be more safety equipment worn by players than there is today, as the trend of increasing safety is unlikely to reverse any time soon. In recent years, even base coaches must wear helmets, and given the amount it costs a team to have a player go down with an injury, they are invested in keeping them unhurt. In 2014, Padres pitcher Alex Torres became the first pitcher to wear a protective over-sized padded cap in the field. By 2040, it could become mandatory for pitchers to wear protective caps in the field. And perhaps pitchers will wear masks, the kind you see in collegiate women’s softball, to protect their faces and heads from the 120-plus mile per hour exit velocity comebackers that hitters produce.

But safety in the uniform could go so much further. By 2040, players will undoubtedly be wearing uniforms built around keeping them cooler. Increased cooling ability could be necessary to combat the effects of global warming on athletic performance. “Modern athletic wear can already regulate body temperature, reduce wind resistance and control muscle vibration,” writes Joshua Hehe in an article titled “The Clothing of Tomorrow.” “Just imagine what it will be capable of in the next few decades. Man-machine interface in the clothing industry will undoubtedly take everything to a whole new level in many ways.”11 A “smart” uniform might not look different, but it could be tracking a player’s biometrics and alert the coaching staff to injury or changes in performance.

So, we can’t predict exactly what the uniforms of 2040 will look like. So many different trends, events, requests, contracts, and other factors will inspire and influence the outlook of baseball uniforms in the future. The desires of the owners, the popularity of colors, the needs of ballplayers, safety, demographics, patriotic fever, tradition, the future, and other factors will lead to what we see the players wearing on the diamond. However, one thing is for sure. We will know when we are there, in the ballpark in the year 2040.

GARY A. SARNOFF has been an active SABR member since 1994. A member of SABR’s Bob Davids Chapter, he has contributed to SABR’s Bio and Games Projects, and to the annual publication of The National Pastime. He is also a member of the SABR Negro Leagues Committee and serves as chairman of the Ron Gabriel Committee. In addition, he has authored two baseball books: The Wrecking Crew of ’33 and The First Yankees Dynasty. He currently resides in Alexandria, Virginia.

3. Jayson Stark, “In the promotions department, Seattle goes out of this world,” Philadelphia Inquirer, July 26, 1998, C6.