This article was written by Mac Souders

This article was published in 1986 Baseball Research Journal

Baseball historians recognize Chadwick as the first newspaperman to report on the game of baseball and also credit him with the development of the boxscore, which has led to the myriad of statistics associated with the game.

In 1856, while covering a game of cricket at the Elysian Fields in Hoboken, N.J., Chadwick observed some boys playing baseball on the outskirts of the cricket field. The action so enthralled him that upon returning to New York he asked the managing editor of the New York Times for permission to cover the game of baseball.

The game Chadwick witnessed that day was essentially the same game that exists today. Although there were no leagues, there were amateur club teams which regularly played each other on a match basis. It was on these games that the young journalist first reported. Initially the coverage consisted of a few lines reporting the scores of the games, but Chadwick’s enthusiasm led to more detailed reporting, resulting in as much as a quarter of a column, an amount virtually unheard of for the coverage of a sporting event.

From this modest beginning Chadwick became a one-man press association, promoting the sport throughout New York City, frequently writing for the New York World, New York Evening Telegraph, New York Herald, Brooklyn Eagle and other eastern dailies. Often Chadwick’s zealous exalting of the game would result in the loss of a job for himself when the paper became convinced that it could use a full-time staff member to cover baseball.

In 1858 Chadwick became the first baseball editor of a newspaper, holding this position with the New York Clipper. From the Clipper he moved to the editorial staff of the Brooklyn Eagle, where he stayed for more than 45 years, chiefly as a baseball writer. During these years with the Eagle Chadwick gained national prominence by expounding his views on the new professional baseball leagues.

While covering a game between the Stars and the Excelsiors in South Brooklyn in 1859, Chadwick introduced what many baseball fans, statisticians and historians consider to be his greatest contribution to the game: the boxscore. Adapted from the scorecard used in cricket, the boxscore is a detailed record of the occurrences of the game, including such data as the names of all the players who participated and the specifics of their performances both at bat and in the field.

With a passion for baseball that could not be satisfied by writing for a single paper, Chadwick also contributed to weeklies such as The Sporting News and Sporting Life and edited Beadle’s Dime Baseball Player from 1860 to 1881. Additionally he edited DeWitt’s Baseball Guide (1869-80), Our Boys’ Baseball Guide (1877-78), Haney’s Book of Reference (1886-70) and the Spalding Official Baseball Guide (1888-1908) and authored The Art of Batting and Base Running in the early 1880s as well as various other sports publications.

As Chadwick’s reputation grew his columns became a platform for espousing his views on many aspects of the game. “Chadwick’s Chat” in the August 10, 1887, issue of Sporting Life illustrates his uncompromising attitude toward his perceived detriments to the game and reflects his position on hard work and clean living as he takes some of the teams to task for blaming their poor performance the previous season on the umpires:

If this season teaches anything, not to mention that of past seasons, it is the utter folly of expecting good play and thorough teamwork out of a party of players, the majority of whom take no care of themselves in keeping their bodies in a healthy condition for the exacting work of the diamond field. To suppose that a man can play ball properly who guzzles beer daily, or indulges in spirituous liquors, or who sets up nightly gambling or does worse by still more enervating habits at brothels is nonsense.

A brief glimpse at Chadwick’s personal habits gives perspective to his comments on the conduct of players. A full bearded man of average stature, he began his daily regimen at 5 a.m. with a cold plunge, followed by a light breakfast and then work. An active journalist into his 80s, Chadwick credited his longevity to the frequent taking of Turkish baths.

Two other aspects of the game which often came under fire in Chadwick’s columns were the playing on baseball on Sundays and gambling on the games. Reluctantly he gave up the fight to prevent baseball on Sundays, realizing the popularity of the sport could be advanced by being played on a non-work day, but to prevent gambling Chadwick labored long and hard.

In 1876 Chadwick was joined by journalists around the nation in a crusade that resulted in the abolition of pool selling on all baseball grounds. To some this, not the boxscore, was his greatest contribution to the sport.

Having authored the game’s first rule book in 1858, Chadwick was often called upon by fans to interpret rules and to settle disputes. In response to a letter to the editor of Sporting Life on June 10, 1907, regarding a trick play designed to fool the catcher, Chadwick’s pedantic nature is evident:

Looking over the complete code of rules of 1906, I find no clause to prevent the above point of play, which is of the low trick order, such as hiding the ball. But the point could never be successfully played on a thoroughly wide-awake catcher.

Chadwick’s moralizing was not confined to the actions of players and management and often extended to the members of the press. Typical is this piece from the October 18, 1890, issue of Sporting Life:

The daily press of this country, acting as caterers for news of the most interesting current events for the general public, is guided solely in giving prominence to this, that or the other feature of news by the demands of the self-same public’s interest in the matter. . . the class of writers I especially refer to are those who revel in sensational stories, and unless actual occurrences are at hand for them to write up, they do not hesitate to use their inventive power with which to concoct “fake” stories for their  respective papers.

Because of such rigid stances on these matters Chadwick was not without his detractors. In a letter to the editor of the Sporting Life on October 4, 1890, a fan chastised Chadwick:

Anything more rabid than his (Chadwick’s) last effusion in Sporting Life would be hard to find. For a newspaper man who claims to be fair he’s about as far from the mark as I know. The older he gets, the worse he gets. . . this man Chadwick has put himself to no little trouble again and again to spread rumors about drinking in the Players League.

In recognition of his journalistic achievements, the semi-retired, 80-year-old Chadwick was presented a medal by the St. Louis Exposition during the 1904 World’s Fair. He was the only journalist to receive such an award.

Upon the occasion of his death in 1908 a large monument, topped with a marble baseball and surrounded with four bases, was erected at his gravesite in Greenwood Cemetery at 20th Street and 8th Avenue in Brooklyn.

The Baseball Hall of Fame welcomed Chadwick into its fraternity in 1938 when he was selected by a special committee for service to baseball apart from playing the game. 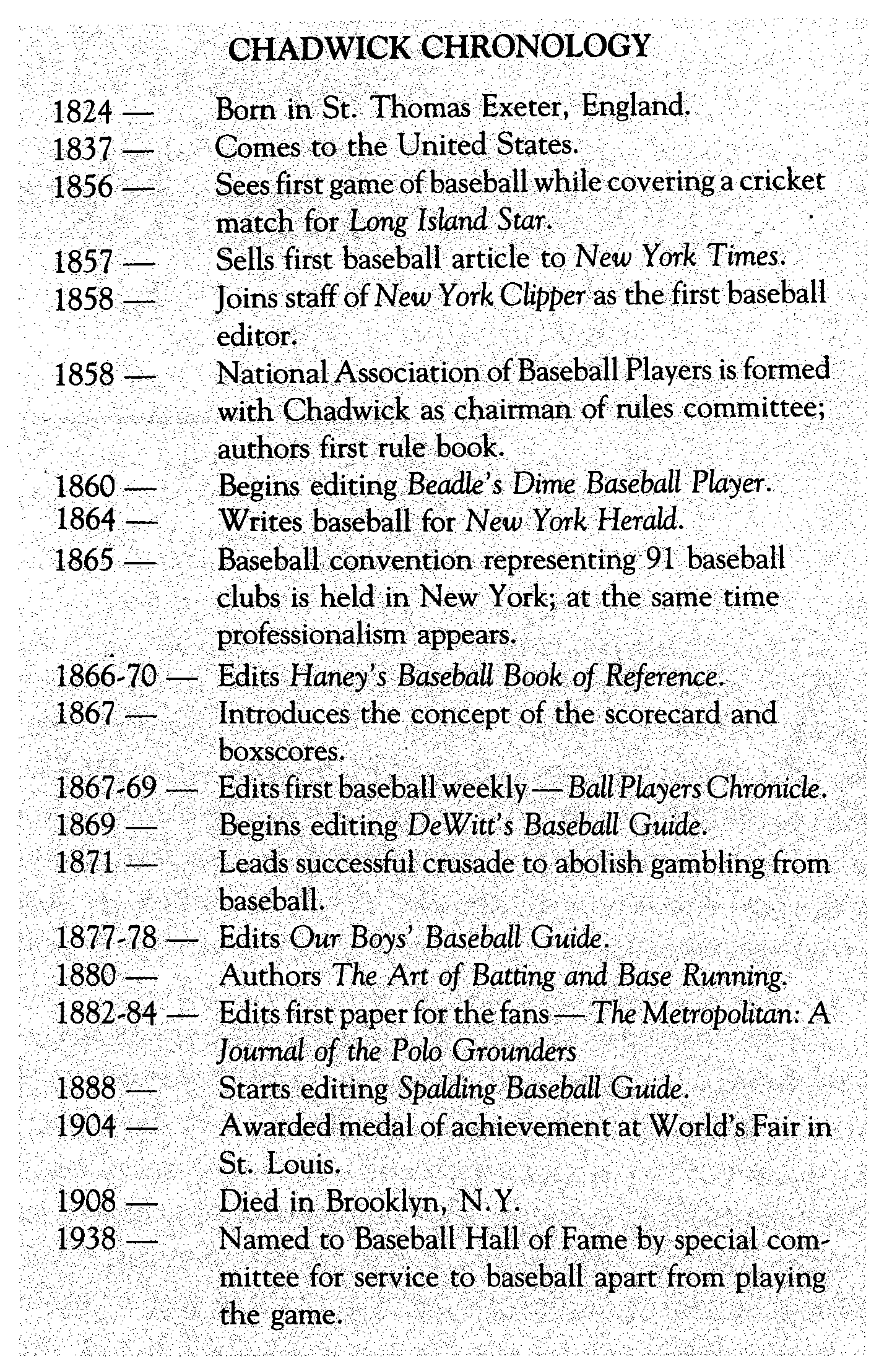