“I cannot see why they should object to playing with me in the game as they have played nine of us in Rockville, and I have pitched against them.”1 — Billy Holland after not being allowed to pitch for Manchester against Rockville on September 1, 1906

Barnstorming independent teams and semipro leagues were common in the early twentieth century, often successfully competing with the major leagues for coverage in the newspapers of the day. According to the Black baseball statistics compiled on Seamheads.com, one such independent team, the Brooklyn Royal Giants, put together a 15-1-1 record in 1906. Although not in a formal league, the Brooklyn Royal Giants played both Black and White opponents throughout the northeastern United States.

On August 8 and 9, the Royal Giants played against two Connecticut teams, Rockville and Manchester. In 1906 they had been scheduled to be part of the “Big Four,” a four-team independent league (including Willimantic and Bristol) organized in April.2 Play was to begin on June 23. However, the Bristol team withdrew on June 10, prompting the league to cease operations before a single game had been played.3 The remaining three teams operated independently, scheduling games against a variety of opponents. By August, only Rockville and Manchester were still operating. Indeed, on August 14, Rockville played against a team from the Connecticut Hospital for the Insane at Middletown, winning 5-1.4

Among the players on the Royal Giants squad that faced Rockville on August 9 was Billy Holland. In his first of two seasons with the team, Holland split his time between the mound, third base, and the outfield. His four mound wins were the second most on the team, and he batted .200 (13-for-65). On August 8, he played left field, and had one of his team’s four hits, a double.5 Bill Merritt pitched for the Royal Giants and limited Rockville to two runs, but unfortunately took the 2-1 loss. 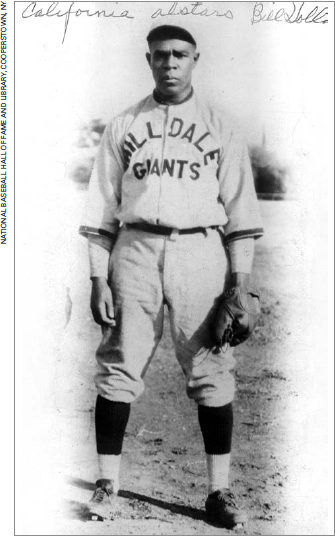 A photo of Billy Holland in the uniform of what appears to be a California Winter League team, the Hilldale Giants (not related to the Pennsylvania-based Hilldale club.) (National Baseball Hall of Fame Library)

The following day, they played at nearby Manchester, and Holland pitched and batted leadoff. Through seven innings, he allowed only one hit and struck out 10, and his team was leading, 3-0. He had contributed to his own cause with a double and a run scored. But Manchester tied the score in the eighth inning on one hit and some very sloppy fielding by the Royal Giants. The game went into extra innings. The Royal Giants scored in the top of the 11th inning to take a 4-3 lead, but with two out in the bottom of the inning, after Manchester had tied the game on a double by Kelley, Joe Casey singled home the winning run. Holland was tagged with the loss, striking out 16 and walking only one in the process. He had yielded only five hits, three coming in the final inning.6

By the time the Royal Giants next played Rockville, manager Billy Lush of Rockville had acquired three new players to beef up his lineup. They had been playing in the Northern League for Rutland, Vermont. They were identified as pitcher Lou Wiltse, a shortstop named Collins from the University of Vermont, and a third baseman named Sheehan.7

On August 22, Holland took to the mound in relief against Rockville and held the lead as the Royal Giants won, 4-2.8 Merritt had started the game for the Royal Giants and Holland entered the game in the fifth inning with the scored tied, 2-2. The Royal Giants’ offense, bolstered by two squeeze plays, generated two seventh inning runs and garnered the win for Holland.9

Holland then returned to Connecticut in September, but not with the Royal Giants. Manager Breckinridge of the Manchester team had obtained his services.

Black players had been barred from teams affiliated with the American and National Leagues since late in the nineteenth century, and it had been 15 years since a team of any kind had been integrated in Connecticut. On two occasions, Manchester sought to use Holland in a game, and on both occasions, the Rockville team thwarted them. The first came on September 1 in a game at Manchester. Rockville objected to taking the field against Holland and elected not to play, prepared to forfeit the game. After about an hour delay, the Manchester management, so as not to disappoint the fans expecting to see a game, let Rockville have its way. Local favorite Eddie Collins (not the Hall of Famer) pitched in lieu of Holland and Rockville defeated Manchester, 11-2.10

Ironically, the other Eddie Collins also played for Rockville. This Eddie Collins, a shortstop, acquired less than two weeks earlier, would join the Philadelphia Athletics less than two weeks later (playing under an assumed name), and would ultimately be inducted into the Hall of Fame. At the time, he was about to enter his senior year at Columbia University. When it was discovered that he had played with Rockville, and before that in Vermont, he was suspended from the school’s baseball team. (They did not know, at the time, that he had played for the Athletics.11) Shortly after graduation in 1907, he once again joined the Athletics, this time playing under his own name, and played in the major leagues through 1930.12

Two days later, Holland was set to enter a game against Rockville on Monday, September 3. It was the second game of a doubleheader and Manchester was leading, 3-2, after five innings. Rockville refused to put up a batter to face Holland and the game did not continue.13 The ruling by umpire Maro Keeney was that Rockville had forfeited the game, and the contest was ruled a 9-0 win for Manchester. The Hartford Daily Times reported that “Rockville people say it (the insertion of Holland) was a deliberate attempt on the part of Manchester to break up the game, while Manchester asserts that Rockville has not a leg to stand on.”14

The reaction to Rockville’s reluctance to play in a game with a Black man was one of disappointment. A fan calling himself “Hartford Baseball Rooter” wrote, in a letter to the Hartford Times:

In justice to the managers, it would be only fair to say that the Rockville manager should not have been allowed to again designate what pitcher Manchester should use. As Rockville has played against colored players all the season, also in view of the fact that the games in question were no[t] league games, and not for a pennant of any kind, it is hard to understand by the disinterested spectator why they, the Rockvilles, should draw the color line at this time.15

The letter writer’s point that Rockville had not objected to playing against Black teams was bolstered not only by games between Rockville and the Royal Giants, but against the Cuban Giants as well. Rockville had defeated the Cuban Giants, 8-2, on August 16.16 Games between all-Black teams and all-White teams were common. However, the integration of teams, even at the semipro level, was rare, and would remain so as the twentieth century wore on.

We have one other example of a Black player integrating a team in Connecticut. The Hartford Twilight League included a Black player in its ranks as early as 1933: Schoolboy Johnny Taylor, pitching for the Savitt Gems. Taylor, like Holland, was barred from playing in affiliated baseball, and played in the Negro Leagues with the New York Cubans beginning in 1935.

In 1945, Taylor once again broke a barrier. He spent the season with the New York Cubans, but late in September returned to Connecticut to play on an integrated team: the Waterbury Brasscos. One game proved notable. On September 28, the Brasscos hosted the New York Yankees in an exhibition game. Taylor pitched the last three innings, earning a save in a 1-0 Waterbury win.17 It may have been the first time that the Yankees had played against an integrated team.

The fielding of a team containing both Black and White players in affiliated baseball didn’t happen until 1946. By the time integration arrived, Taylor had lost some of the zip in his fastball, but he did join the Hartford Chiefs of the Eastern League in 1949, becoming the first Black player to play on a Hartford-based team affiliated with Major League Baseball—43 years after Billy Holland visited Connecticut.

ALAN COHEN has been a SABR member since 2010. He chairs the SABR BioProject fact-checking committee, serves as Vice President-Treasurer of the Connecticut Smoky Joe Wood Chapter of SABR, and is a datacaster (MiLB stringer) with the Hartford Yard Goats, the Class AA Eastern League affiliate of the Colorado Rockies.

The author wishes to express gratitude to the Connecticut Historical Society for allowing access to the Hartford Times.

In addition to the sources shown in the notes, the author used Baseball- Reference.com and Seamheads.com.

12. The person who recommended Collins to Philadelphia manager Connie Mack was Athletics pitcher Andy Coakley. 15 years later Coakley was coaching at Columbia (Collins’ College). The irony is that one of his players spent about the same time in Hartford as Collins had in Rockville. Lou Gehrig also received a suspension from the university.