During a playoff broadcast in 2002, Tim McCarver made a comment to the effect that there are more multi-run innings that begin with a walk. McCarver also asserted,“The one thing I would tell a young pitcher is never walk the leadoff man. He always scores; he always scores.” I examined the second of these comments in 1998 at the request of the San Diego Padres, although for the life of me I do not recall what use, if any, they made of what I gave them. I have expanded my data set since that 1998 study, and for this article I checked every game from 1974 through 2002. This 29-year period covered 61,365 games and 1,101,019 half innings. There were more than 4.5 million plate appearances in these games. Following is an analysis of the consequences of starting an inning with a walk. There are three tables of data which address the basic topic in different ways.

Table 1 . Frequency of Methods by Which Leadoff Batters May Reach Base 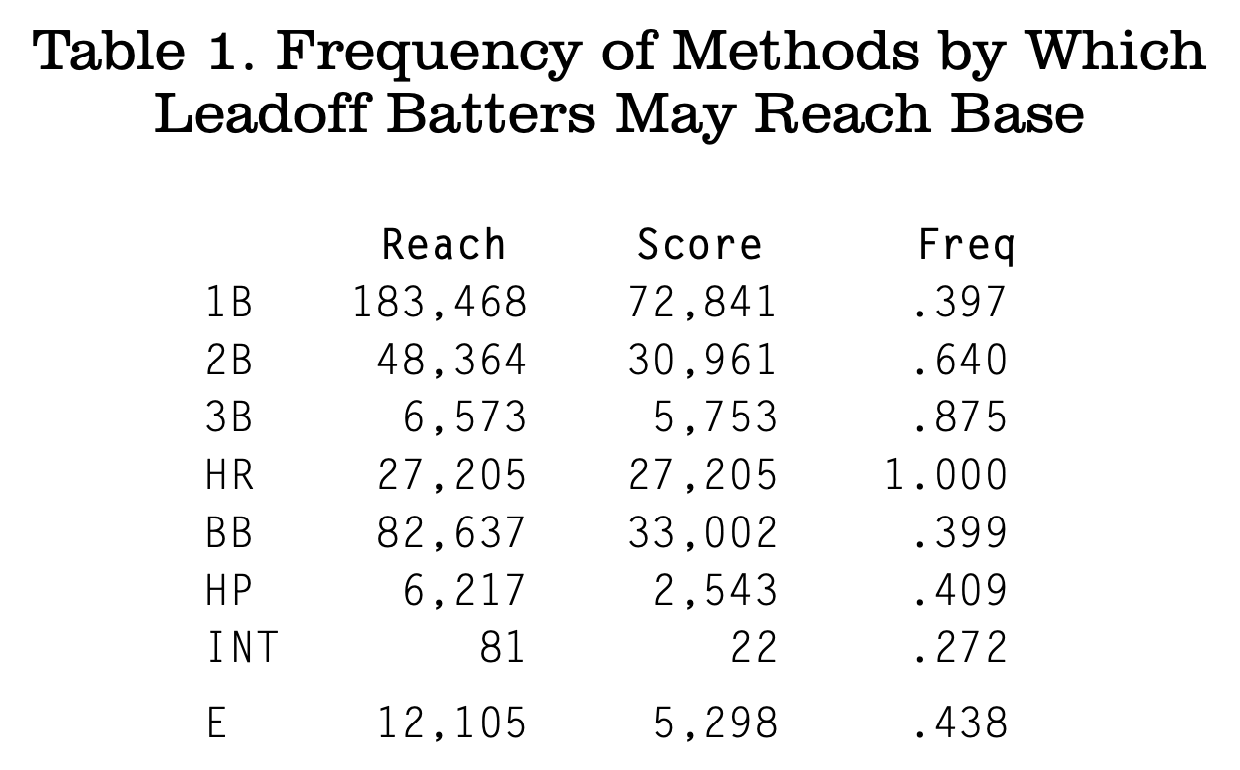 Table 1 includes all the methods for leadoff batters to reach base, number of times each event occurred, the number of times that batters scored, and the frequency of each. Note that the “E” category includes all times the leadoff batters reached on an error, which includes those cases when he went past first base (e.g., a two-base error). The frequency for batters with leadoff walks scoring is insignificantly different from the frequency for leadoff singles; both are a tiny bit lower than the value for reaching via a hit-by-pitch.

My conclusion from this data is that a leadoff batter who walks does not “always score”; the walk has the same effect as any other way of reaching first base.

Table 2 lists all possible outcomes for leadoff batters (the eight categories from Table 1, plus making an out), the number of times the indicated number of runs were scored. For example, batters led off an inning with a single 183,468 times and in 104,074 of those innings his team did not score. One run was scored 35,868 times, two runs on 22,726 occasions, etc., with all innings of six or more runs combined.

These raw totals are not easy to compare. The various outcomes occur with very different frequencies. Therefore, I created Table 3. Table 3 contains data from Table 2 normalized per number of occurrences of each outcome. For example, a lead- off single led to no runs with a frequency of .567 (56.7%), one run was scored after the leadoff single with a frequency of .196, etc. 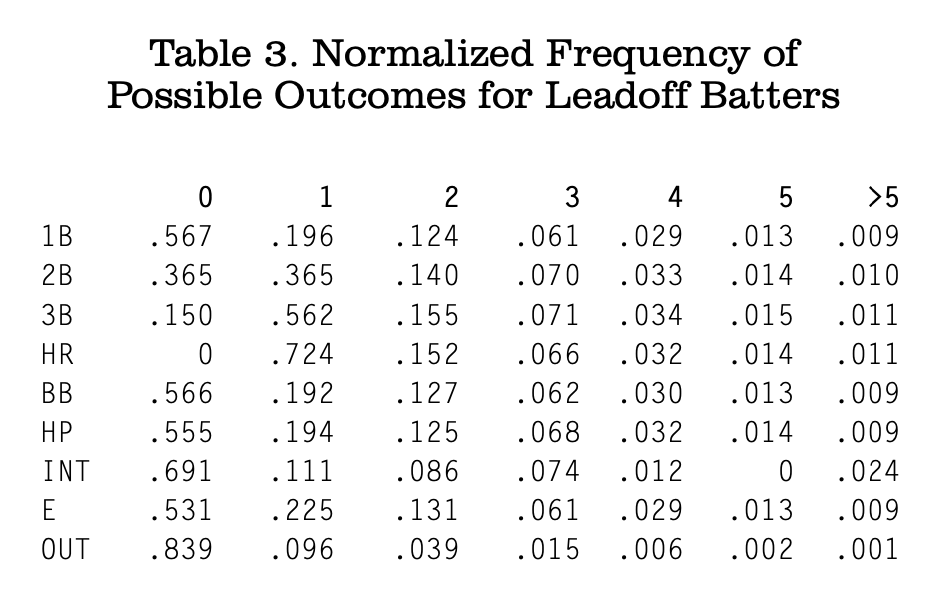 The values for leadoff singles and leadoff walks are virtually indistinguishable. The hit-by-pitch data are only slightly lower in the “no runs” category.

Both of McCarver’s assertions are clearly contradicted by this huge body of evidence. Having the leadoff batter reach base is certainly an advantage for the offense (compare the values for the “out” row in Table 3). The data for reaching on interference are far too limited to be useful. When the leadoff man collects an extra-base hit or reaches on an error (with the occasional cases of going past first on the error included), it is even better than reaching first, as expected. However, if we look at just those instances when the leadoff batter reaches first, then it does not matter how he got there.

Even if we allow Tim some poetic license for his hyperbole—it is his job, after all—we do not need to accept his opinion as authoritative. I have great respect for anyone who played in the major leagues for 22 years, as McCarver did. However, anecdotal observations and gut feelings are just that and have no inherent credibility, no matter what the source. Since we can now check these opinions with evidence, and McCarver definitely has at his disposal the talents of people who can do such checking, then we should expect him and other announcers to get it right. Hunches and feelings may be fine places to start an investigation, but they are very poor substitutes for the substantiated conclusions that come from careful analysis based on appropriate evidence.

DAVID W. SMITH is the president and founder of Retrosheet.