This article was published in Spring 2020 Baseball Research Journal 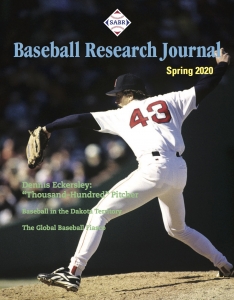 One thing I have learned through my long association with SABR is that sometimes “it all depends on how you count it.” If you consider that our goal is typically to get the spring issue of the BRJ to press before Opening Day, this issue is not yet late! But if one uses the other calendar methods, well, we are now about two months into Quarantine Time as I write this. And Quarantine Time is measured not in days or weeks, but by flattened curves.

I was on my way to Florida when the announcement came that Major League Baseball was suspending spring training. The night before my flight, the news broke that Utah Jazz basketball player Rudy Gobert had tested positive for coronavirus. (Who could have predicted that the guy who cavalierly made light of the encroaching crisis by touching all the microphones of reporters after a press conference would be the one to catch it? Funny that.) Gobert’s diagnosis was a huge wake-up call not only to him — he would later apologize profusely for not taking things seriously enough — but to the entire USA. This young paragon of health, a major star athlete, in the middle of the country (the Jazz were in Oklahoma City at the time), caught it and didn’t even have any idea where he got it from.

The virus was already inside the borders. And it seemed like overnight, people suddenly believed it. Individual case counts and dire stories from Seattle and epidemiological facts didn’t make people see. But a single major sports figure getting the virus: that made the threat real.

Though some in government didn’t want to recognize the seriousness or urgency of the situation right away, every sport shut down operations within the 48 hours after the Gobert announcement. The NCAA basketball tournament, which had already been scheduled to go forward without fans in the seats, was called off entirely (as were all NCAA championships in every sport). The NBA and NHL “suspended” their seasons. MLB called off spring training. Even the PGA Tour, which flirted with the idea of holding a golf tournament without fans, in the end decided to cancel it.

I believe the cancellations themselves drove home the severity of the situation to many who were still hoping the pandemic might “blow over.” This isn’t solely about sports, of course. The news about Tom Hanks’ diagnosis broke at the same time as Gobert’s. Broadway went dark, and a few days after the sports-pocalypse, Walt Disney World closed its doors. The tangible effect of the pandemic on these cultural touchstones and the mass media that connects us together is what made it all real for the first time. Historians, take notes. The effect of this global “pause” will be studied and written about for generations to come.

Now, of course, we live the “new normal.” I only leave the house for groceries, where I stand in a line six feet apart from other shoppers, wearing my facemask and disposable gloves, and I pine for baseball, which would be the perfect distraction from the dire mortality statistics I can do nothing about. As I write this, MLB and the players are discussing outlandish plans for how to conduct a half-season (starting in July) safely and equitably. But there is no guarantee that any kind of a season will happen. The future is uncertain, and the present is on pause, so looking backward at the past is all we have for the moment. Classic games on television and in our SABR Games Project archives, the #StayHomeWithSABR initiative, and, of course, the BRJ right here in your hands.

May you all live to see baseball return.