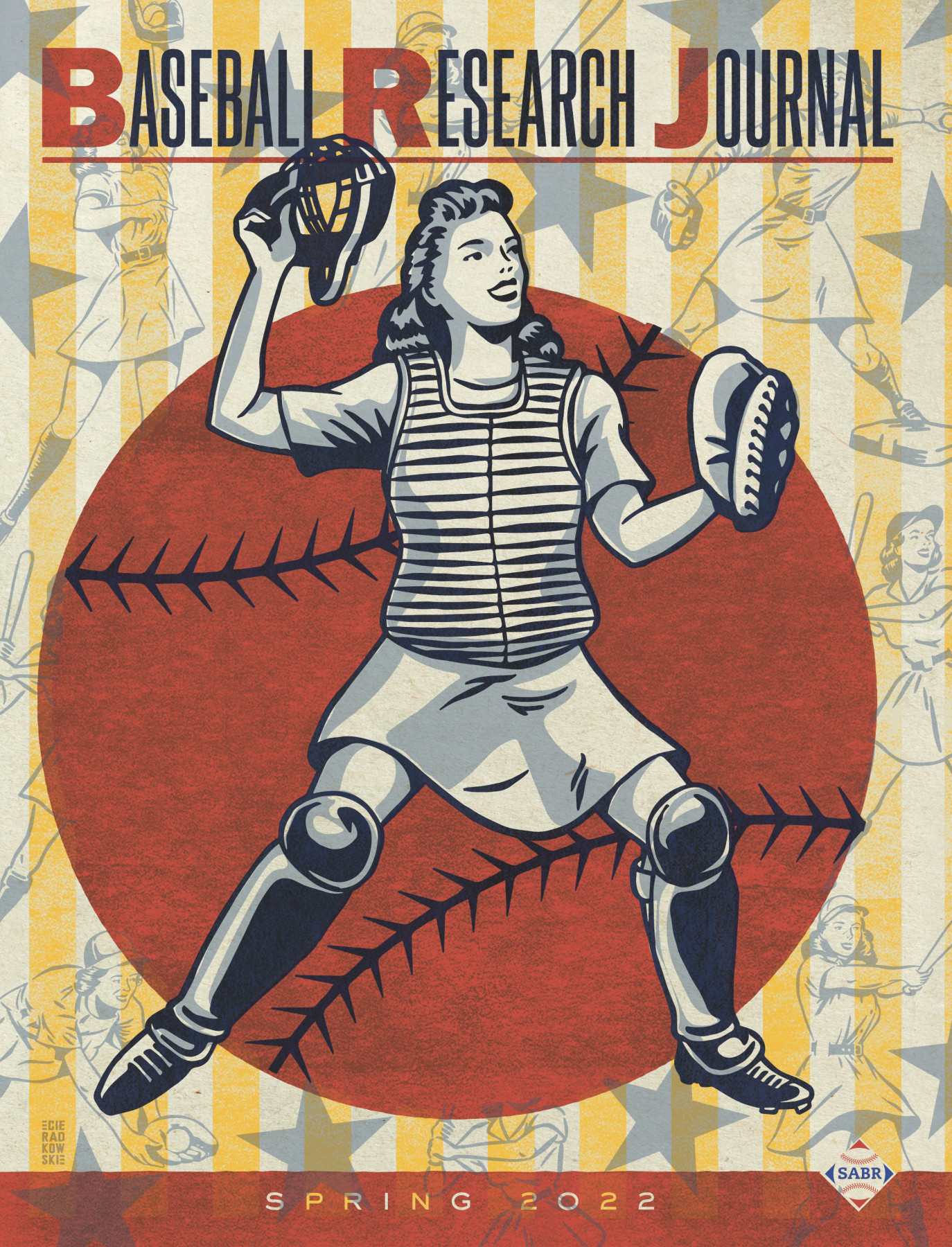 If you are a longtime reader of the Baseball Research Journal, you know the last time we had a themed issue was in 2011, when I first took over as SABR’s Publications Director. That spring, Stu Shea jumped in as guest editor to produce a special issue on the Chicago Cubs, and that fall my first issue as editor carried the theme of SABR’s 40th birthday, with each article focused on a post-1971 topic. Since then, the queue of research papers has never been empty. In my eleven seasons on the job as PD, I’ve read papers on everything from biomechanics to urban planning, from art history to economics. I once heard an author speak and a member of the audience asked what being a professional writer/editor was like. The answer: “Like having homework every night for the rest of your life.” The line got a laugh, of course. What was unsaid, though, is how much we writers and editors like it.

It was Scott Bush’s idea to solicit articles on the theme of women in baseball, ostensibly to mark the anniversary of Title IX. This landmark legislation is about much more than sports, but expanding and equalizing women’s access to college athletics is one of its most visible and impactful legacies. Title IX did not, of course, guarantee that women could play baseball. (Most universities took a page from Little League’s playbook, perpetuating a “separate but equal” system that equates baseball for men with softball for women.) But Title IX established a generation of women for whom participation in sports is a given, and when the establishment hasn’t provided ways to play baseball, many women have created opportunities for themselves.

I played women’s baseball in the early 2000s. At the time there were scattered leagues and organizations around the US and Canada, ranging from outgrowths of Little League-style youth organizations to pseudo-pro (non-paying) leagues founded by impresarios hoping women’s baseball could turn into a money-making endeavor.

I consider it a failure of the American education system that I didn’t learn to throw a baseball properly until I was in my thirties. But there I was, having answered an open call for tryouts for the New England Women’s Baseball League, wearing my regular Reeboks and carrying a Bucky Dent souvenir glove I’d had since I was a kid. Winter clings on in New England, so the tryout took place indoors at Strike One — a baseball practice facility co-owned by Eric Wedge, who would shortly take the job in Cleveland as skipper of the then-Indians.1 Strike One was like an indoor tennis facility if you took out the nets and covered all the courts in a foot of packed clay. (In fact, I think that might be what it was.) As I was about to learn, everything in baseball starts with a game of catch. The tryout hadn’t officially started, but the women who had played in the previous, impresario-owned incarnation of the league were pairing off and starting to throw. One of them saw me standing there alone and invited me to throw with her. She tossed the ball to me and I caught it, which I considered a miracle at the time: I hadn’t been sure the 25-year-old glove wouldn’t just fall apart right on the spot. Then I tried to throw the ball back to her and it sailed over her head. Whoops.

She was patient, and kind, and showed me the right way to grip a baseball—across the seams—to make it fly fast and straight. What I didn’t know at the time was that I had just met someone who would be a significant figure in women’s baseball for decades: Robin “Bama” Wallace. She had already been a pioneer: the only girl in her Little League in Mobile, eventually the “first girl to play [high school] baseball in Alabama.”2 Later, the only woman on a Division III college baseball team, where she received death threats.3 Eventually, after serving as general manager for an independent (men’s) baseball team, playing in the first Women’s Baseball World Cup (2004), getting her law degree (2005), and speaking at the SABR National Convention (2013), Robin Wallace would become the first woman hired by the Major League Scouting Bureau (2014).4 She told MLB.com at the time, “I am happy that in the process of pursuing my goals and dreams that I might open the doors for other women.”5

The next wave of pioneering women to come through that door is here now. In November 2019 a slew of promotions and hires were announced, including Andrea Hayden (Twins), Rachel Folden (Cubs), and Rachel Balkovec (Yankees). More quickly followed, including Alyssa Nakken (Giants), Bianca Smith (Red Sox), and of course MLB’s first female general manager, Kim Ng (Marlins), now totalling 22 women in MLB coaching or player development roles, with more in minor league front offices, as well.6 But minor league contraction and staff layoffs post-pandemic have made jobs in baseball even harder to win and keep than before. It remains to be seen whether the recent spate of female hires is a merely sport-wide fad, or if truly lasting change has come. I expect twenty years from now that someone — maybe one of you reading this — will write about how this moment for women in baseball eventually turned out.

Speaking of expanding access and opportunity, maybe it shouldn’t be a surprise that this is the most women authors that a single issue of the Baseball Research Journal has ever had. This issue also features numerous first time contributors, in all sections. It seems the BRJ is becoming a popular destination for many researchers — so many, in fact, that we’ve had to close the submission queue, temporarily. The BRJ will reopen to article submissions in August. I’m looking forward to having lots more homework.