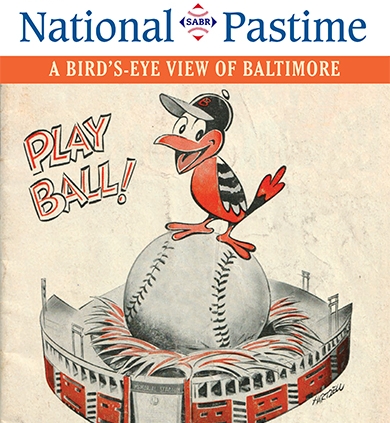 Welcome, friends, to our “virtual visit” to Charm City. A book or magazine is always that, but our need to transport ourselves through the written word to other places and times is felt quite keenly in the year 2020, when the real-life 50th SABR convention has been postponed because of the COVID-19 pandemic. Thank you to all the donors and sustainability benefactors who made this publication possible.

Even were it not for the global crisis, this would be a time of both reflection and prognostication for SABR. Big round numbers tend to inspire such thinking: 3,000 hits, 500 home runs, 50 years. This summer would have been the 50th SABR annual conclave, and 2021 would be the 50th anniversary of the organization. It was a convenient fence-post error that essentially meant we could celebrate our nifty fifty-ness for two whole years.

The pandemic put the kibosh on our gathering in 2020, but in the meantime, celebrations go on. The University of Nebraska Press has published a 600-page compendium of SABR’s 50 best articles — one for each year — entitled SABR 50 at 50. Meanwhile, SABR itself has presented a summer of “at home” presentations, including many of the panels and research presentations that would have been seen at the convention. (All are available on the SABR YouTube channel.)

One of the #SABRVirtual presentations was given by longtime treasurer F.X. Flinn, revealing a time capsule from the year 2003, when a SABR survey about “Baseball in 2020” was given to members and posted online. Remember back when the Twins, Expos, Devil Rays, and Padres were all on the chopping block? 81% of respondents felt Montreal would lose their team by 2020, and 72% felt Washington, DC, would gain one. Both things came to pass within two years: the Expos began play as the Washington Nationals in 2005.

And 40% of respondents thought major league baseball would be interrupted by some “national emergency.” The six-day interruption of the 2001 season after the September 11 attacks now seems like a lifetime ago, doesn’t it? The 2020 season was put on pause on March 12; Opening Day took place July 23. As I write this, two teams have had significant outbreaks of the virus, the Miami Marlins and the St. Louis Cardinals. Only time will tell whether the illness will permanently affect their lives or careers, or whether a World Series champion will ultimately be crowned.

I expect twenty years from now we’ll still be writing about “what happened” during the 2020 season, no matter how long it runs. In 2020 SABR formed a Century Committee to research and memorialize events and issues in baseball from 100 years earlier. Chaired by Sharon Hamilton, over the coming decade the committee will put a spotlight on the Jazz Age and the early years of the Negro National League. Plans are also in the works to launch another survey similar to the one given in 2003, looking at baseball in 2040. We look back; we look forward.

Here in The National Pastime, we mostly look back. The articles are arranged roughly chronologically, beginning with the 1901 AL incarnation of the Baltimore Orioles, and wending forward to meet not only many of the usual suspects — John McGraw, Babe Ruth, Brooks Robinson, Frank Robinson, Earl Weaver, Cal Ripken — but many whom you may not be as familiar with. Jerry Sullivan, a 3-foot-11 actor who appeared in a 1905 Eastern League game, 46 years before Eddie Gaedel. Howie Fox, the only man to return in 1954 with the newly-placed major-league Orioles after having played for the 1953 minor-league Orioles. Tom Gastall, a bonus baby whose hobby of aviation led to his demise in the Chesapeake Bay before he could complete his second season in the majors. Xu Guiyuan, the first prospect out of MLB’s academies in China, signed by the Orioles.

We look at not only the major leagues, but minor leagues, college-age leagues, the Class-D Potomac League, and the Negro Leagues. Tucked in these pages you will also find the major leagues’ first costumed mascot, Mr. Oriole, and even a historical account of Baltimore’s role in the advance of sabermetrics through the part it played in helping Retrosheet to get off the ground.

Until such time as we can raise a glass together in the hotel bar, or sing “Take Me Out to the Ball Game” in our SABR section of the stands at Oriole Park at Camden Yards, or wherever we might gather next, I hope you enjoy reading The National Pastime and the other great research coming from SABR. The newly revamped website is a joy to browse, the SABRcast podcast with Rob Neyer is going strong, and the #SABRVirtual video archive and future Stay Home With SABR programming all await your perusal as well.

Wait ’til next year,