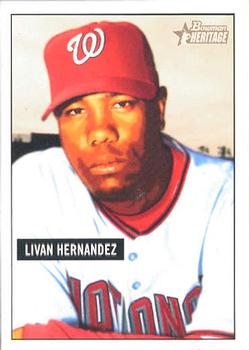 DC Mayor Anthony Williams was among the 45,596 excited fans who braved the traffic or the Metro, extra security screenings, and other logistics challenges. Former Washington Senators including Frank Howard, Joe Grzenda, Tom McCraw, and Mickey Vernon took the field in their old positions, then gave way to the current players.2 President George W. Bush threw out the first pitch to a nervous Brian Schneider using a ball from the final Senators game in 1971.3 In additional ties to Washington’s baseball history, local resident and former Negro League player Mamie “Peanut” Johnson and Audrey Fields, widow of Homestead Grays player Wilmer “Red” Fields, were among the honored guests.4 Commissioner Bud Selig5 joined President Bush in his box.

And just in case anyone in DC wasn’t paying attention, the media pregame coverage was, well, thorough. Everyone from the local TV weather forecasters to 600 national media were covering the game. The Washington Post even assigned a reporter to write about the excessive media coverage.6

After Bush’s first pitch, the National Anthem sung by Renee Fleming, and the military flyover, the game got underway with a first-pitch strike thrown by Liván Hernández (0-1, 5.40 ERA) to Schneider.7 The ball was tossed to the dugout, bound for Cooperstown.8 With the crowd cheering each strike and moaning at (or booing) each ball, it was clear the fans were into the game from the start. Hernández had a solid first inning: To the delight of the crowd, Craig Counsell struck out and Royce Clayton grounded out on the next pitch. Luis Gonzales worked the count full and drew a walk but Troy Glaus struck out swinging.

Javier Vázquez (0-1, 15.43 ERA) took the mound for the Diamondbacks. He had been an All-Star in 2004, but his 2004 second half ERA of 6.92 may have led the Yankees to trade him to the Diamondbacks. His 2005 results to date had not been encouraging: two starts, seven innings pitched, 12 earned runs allowed. After Brad Wilkerson flied out, Nick Johnson hit the next pitch into left for the first Nationals hit in their new home. José Vidro drew a walk but José Guillén grounded into a double play to end the inning. Guillén was one of the three starting Nationals players who had not been Montreal Expos in 2004. The other two were Vinny Castilla and Cristian Guzmán.9

Shawn Green walked to start the second but was erased when future National Chad Tracy grounded into a double play. Chris Snyder lined out to give Hernández a quick inning.

After Ryan Church, the youngest National (26 years and 6 months old), popped out, Castilla doubled down the third-base line into the corner. But the Nationals couldn’t take advantage: Schneider was out on a foul pop and Guzmán struck out swinging.

Before the top of the third, the grounds crew worked on the mound, tamping additional clay into the front slope. Nationals manager Frank Robinson had said that overall the grounds looked great. Once Hernández got settled, he induced groundouts of Quinton McCracken, Vázquez, and Counsell on eight pitches. Vázquez was equally effective in the bottom of the third, collecting strikeouts from Hernández, Wilkerson, and Johnson.

Clayton grounded toward third to start the fourth: Castilla made a great play to throw him out. Gonzalez was credited with a single when Guzmán knocked the ball down but couldn’t hang onto it. After Glaus walked, Green’s groundout advanced the runners to second and third. Tracy was intentionally walked to load the bases. The strategy worked: Snyder chopped to third, so all Castilla had to do was step on third to end the frame.

The scoring finally started in the bottom of the fourth. After Vidro doubled into right, Guillén’s shirt was brushed by a pitch, earning him a free trip to first. Church popped up for the first out. Castilla tripled, scoring two on a broken-bat hit down the first-base line. Castilla scored standing on Schneider’s sacrifice fly. That put the Nats up 3-0, to the delight of the crowd. Guzmán struck out swinging again.

The top of the fifth opened with a dramatic defensive play by Johnson at first. He dove for the ball, rolled over, got up, and beat McCracken to the bag for the out. Vázquez popped out and Counsell grounded out. The only drama in the bottom of the fifth was a dropped third strike on the third out. Johnson did not beat the throw to first.

Hernández continued effectively in the top of the sixth, allowing only a walk to Glaus. Vázquez got two quick strikeouts in the home half of the inning but the third out proved elusive. Church singled, then Castilla hit a home run into the left-field bullpen, putting the Nationals up 5-0. The fans celebrated by jumping, which visibly shook the stands, unnerving some of the players.10 Schneider singled. Guzmán got a base hit and (sarcastically) signaled to the dugout for the ball, since he was batting .108 when he stepped to the plate.11 Hernández flied out to finally end the inning. That was also the end of the day for Vázquez at 92 pitches.

Hernández worked a one-two-three inning in the top of the seventh: a dozen pitches for two flyouts and a strikeout. The fans embraced the seventh-inning stretch, including singing “God Bless America” when the stadium microphones failed so the Navy chorus went unheard.12 Randy Choate worked the bottom of the seventh for Arizona. It took him a few more pitches (20) than Hernández to get three groundouts and he did walk Vidro, but the result was the same: The score was unchanged.

Hernández was still rolling in the top of the eighth. He had allowed only that one hit back in the fourth. Pinch-hitter Álex Cintrón and Counsell both popped out and Clayton looked at strike three. At 105 pitches some pitchers might think their day was over, but not Hernández: He led the majors in complete games in 2004 with nine,13 and averaged almost 112 pitches per game.

Lance Cormier took the mound for Arizona in the bottom of the eighth. Church singled to right. Castilla stepped to the plate to the cheers of the crowd, knowing he needed a single to complete the cycle.14 Cormier’s first pitch hit him in the shoulder, sending him to first but not the way he wanted to get there. The crowd booed loudly and home-plate umpire Jim Joyce immediately issued a warning.15 The two baserunners were stranded, though, as Schneider grounded into a double play and Guzmán flied out.

Gonzales started the Diamondbacks’ ninth with a 10-pitch at-bat resulting in a walk. The 10 pitches included a controversial noncall of a strike on a ball that ticked off his bat. Glaus flied out but Green singled. Tracy put Arizona on the board with a three-run homer into the right-field bullpen. That ended Hernández’s outing at 121 pitches. Chad Cordero, the Nationals’ 23-year-old closer, brought the crowd to its feet when he induced a Snyder groundout for the second out. Although McCracken singled to center, Cordero earned the save when pinch-hitter Tony Clark’s fly ball settled into Church’s glove in center. The cannon and fireworks went off, celebrating the Nationals’ first win in their temporary Washington home park.

The 2005 Nationals got off to a great start, but faded after the All-Star break and finished at 81-81. They spent three years at RFK Stadium before moving to Nationals Park in 2008. The team didn’t have a winning season until 2012, when it won its first division title. After failing to get out of the first round of playoffs four times, the Nationals finally won it all in 2019. Chad Cordero threw the ceremonial first pitch of Game Three (their first World Series home game) to Brian Schneider.16

In addition to the sources listed in the notes, the author consulted Baseball-Reference.com and Retrosheet.org, and viewed the broadcast on YouTube: youtube.com/watch?v=_U6gdW-yaiE. (This is the broadcast that was not seen live due to the contract dispute.)17

1 It wasn’t fully ready. The offices were in trailers, there was no hot water in the players’ showers after the exhibition game, power-washing the stadium challenged its structural integrity, and during a later game an exploding rat shorted out the radar gun. Luke Mullins, “’It Was ‘The Office’ Does Major League Baseball’: An Oral History of the Nats’ First Year,” Washingtonian.com, April 1, 2020. washingtonian.com/2020/04/01/oral-history-washington-nationals-first-year-nats-park/#VII-Technical-Difficulties.

4 Nakamura. Fields pitched for the Homestead Grays, including pitching for the team that won the last Negro League World Series in 1948. Johnson pitched for the Indianapolis Clowns, but settled in DC. When the Major League Baseball Negro Leagues special draft took place in 2008, the Nationals drafted Johnson. mlb.mlb.com/content/printer_friendly/mlb/y2008/m05/d29/c2795840.jsp. Retrieved May 3, 2020.

5 Selig was in the process of selecting new owners for the Nationals. Major League Baseball owned the team, but after engineering the move from Montreal, the next step was to choose a new owner from among the several applicants. Thomas Heath, “Powerbrokers See More Than a Game,” Washington Post, April 15, 2005. washingtonpost.com/wp-dyn/content/article/2005/04/14/AR2005041403091.html.

7 Fourteen years later, Schneider would also catch the ceremonial first pitch before the Nationals’ first World Series game in Washington. Stephen G. “Ghost” Mears, “A Look Back to 15 Years Ago Today in 2005 for the First Pro Baseball Game in Washington DC Since 1971,” talknats.com/2020/04/14/look-back-15-years-ago-today-2005-first-pro-baseball-game-washington-dc-since-1971/.

8 Sheinin. The National Baseball Hall of Fame and Museum also took manager Frank Robinson’s cap and a jar of dirt from the mound.

9 Mullins. Major League Baseball had made the decision just before the end of the 2004 season to move the Montreal Expos to Washington, setting off a frantic scramble to create a back office, fix up the stadium, develop a fan base, find sponsors, etc. The quality of the team had not been a high priority. Mears, also en.wikipedia.org/wiki/Montreal_Expos.

10 Mullins. The TV broadcasters, Ron Darling and Mel Proctor, mentioned the shaking during their broadcast. However, because of a contract dispute, no one beyond their production truck saw the broadcast in real time. The bounciness of the stands was a feature, not a bug. It was visible from the field. From personal experience, the author can confirm that it was possible to shake the stands even with well under a sellout crowd.

15 There were no “revenge” hit-by-pitches thrown at the Diamondbacks by the Nationals, either in the remainder of this series or when the Nationals visited Arizona later that year.