This article was written by Ray Gonzalez

This article was published in 1982 Baseball Research Journal

Many baseball historians credit the New York Yankees with being — historically — the greatest team in baseball. When you ask them why the Yankees were so good, the first reason they give is the team’s dominating home run power year after year. After all, the Yankees hit more than 100 home runs a record 57 seasons, and they led the American League a record 34 years.

But that is only one-half of the home run story. While the Yankee batters were hitting more home runs than any other club, the Yankee pitchers were giving up fewer than most of the other clubs. That’s quite a combination! In the 80 years that the Yankees have played in the American League, 1903 through 1982, they have hit 9124 home runs. In the meantime their pitchers have given up 6402 round-trippers. This is a tremendous margin of superiority. Maybe, instead of giving so much credit to Ruth, Gehrig, DiMaggio, Mantle, Mans, and Berra, we should give more to Jack Chesbro, Waite Hoyt, Herb Pennock, Red Ruffing, Lefty Gomez, Spud Chandler, and Whitey Ford.

The Yankees built up this highly favorable ratio of home run offense vs. home run defense in the years from 1920 to 1966. For 47 consecutive seasons the New Yorkers hit more home runs than they allowed. This included the 1966 season when they finished in 10th place. Some of their better years included 1921 when the Yankees hit 134 homers and gave up 51; in 1927 when they had the remarkable record of 158 and 42; and 1936 when they were 182 and 84. In 1921 and 1927 their margin was so high they were the only one of the eight clubs to hit more than they gave up.

It wasn’t always that way with the Yankees. In their first years in the Polo Grounds — 1912 to 1919 — they had eight years in a row when they gave up more homers than they hit. However, the totals were much smaller in that deadball era.

While the Polo Grounds held no particular advantage for left- or right-handed hitters, this was not the case with Yankee Stadium with its inviting right-field stands and its wide-open spaces in left-center. Of the Yankees’ 20 leading home run hitters (see accompanying chart), 11 were left-hand swingers and two — Mantle and Roy White were switch hitters who hit most of their four-baggers from the left side. At the same time, the Yankees were sending against the visitors in Yankee Stadium such formidable southpaw hurlers as Herb Pennock, Vernon Gomez, Eddie Lopat, Tommy Byrne, Whitey Ford, Fritz Peterson, Al Downing, Tommy John, and Ron Guidry, as well as firemen Joe Page and Sparky Lyle.

Whitey Ford was the Yankee hurler who gave up the most home runs, 228 in 3170 innings. Red Ruffing was next with an even 200 in 3169 innings, followed by Mel Stottlemyre with 171 in 2662 frames. They are the three career leaders in innings pitched as well, so the home run rankings are not surprising. They are low, however, compared to the career totals of such other hurlers like Robin Roberts (502), Ferguson Jenkins (465 through 1982) and Catfish Hunter (374). Hunter, who spent five seasons with the Yankees, gave up 113 round-trippers in only 993 innings. That is a frequency of one per 8.8 innings pitched. That is the highest frequency for any Yankee hurler with more than 750 innings pitched. Ralph Terry ranks next with a frequency of 9.0.

We will carry below a list of the 20 Yankee hurlers who gave up the most home runs. However, that list will not include several relatively long-service hurlers, mostly from the early years, who did not give up enough home runs to qualify. Here they are, all right-handers, ranked by innings pitched as a Yankee. 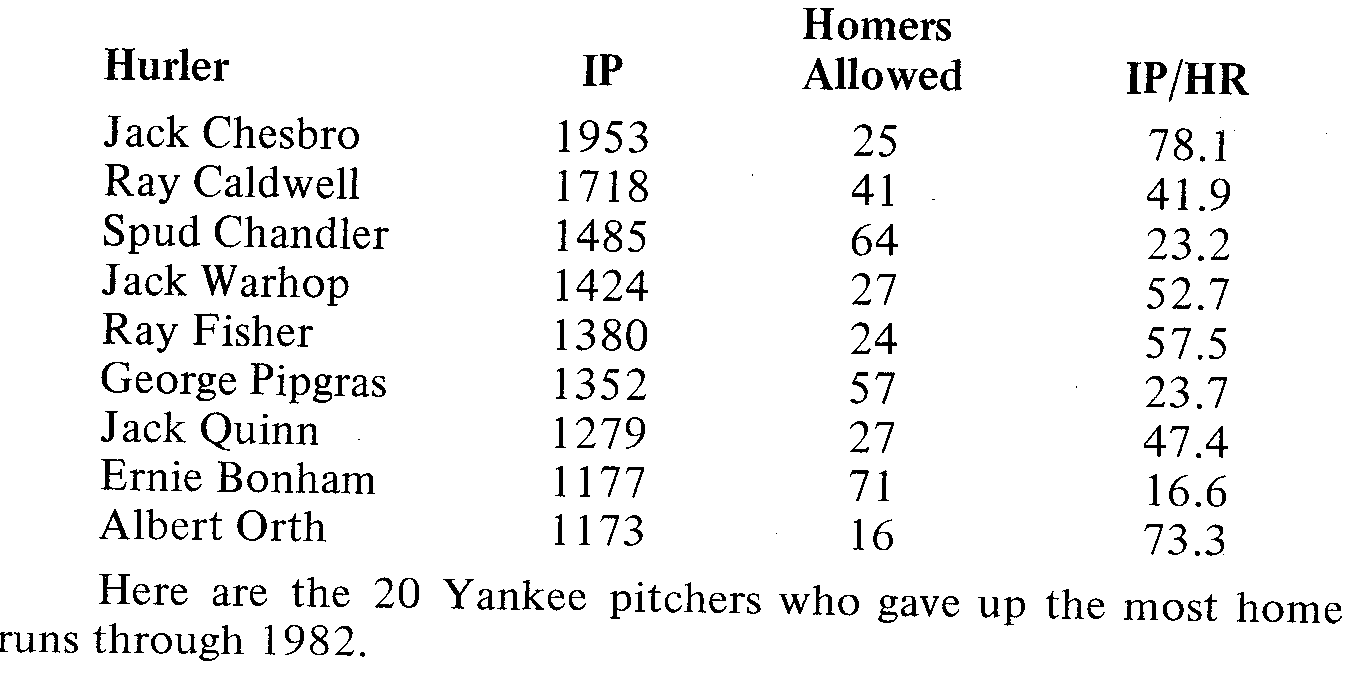 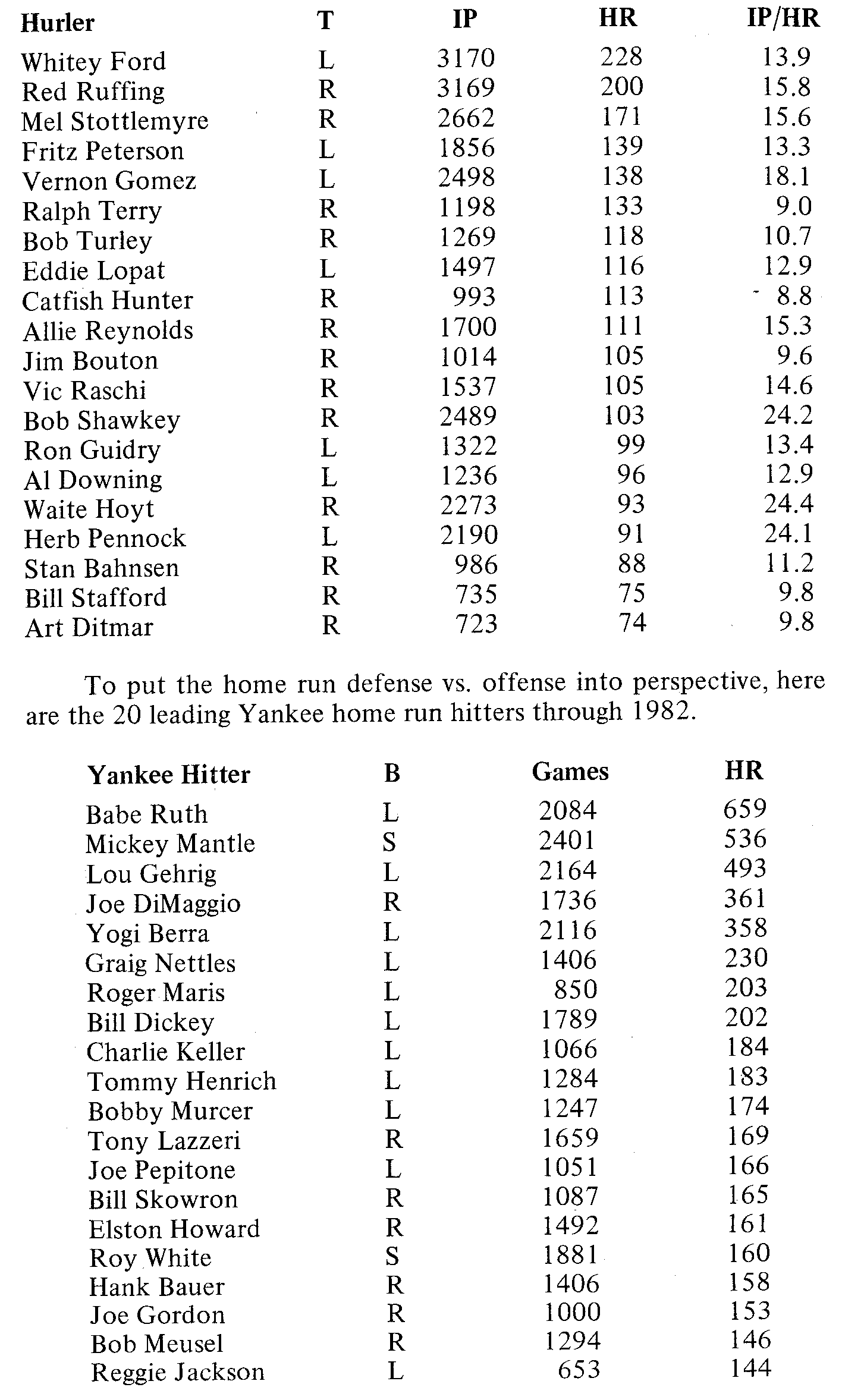