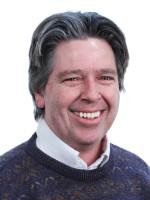 Michael Haupert (1961–) dramatically expanded our understanding of the business of baseball through his research of player contract cards at the National Baseball Hall of Fame and Museum in Cooperstown. Haupert, a professor of economics at the University of Wisconsin-La Crosse, extracted and made available the information for roughly 100,000 player seasons, providing the first comprehensive accurate salary and contract information for a large swath of baseball history. With his additional groundbreaking research on the New York Yankees, Negro Leagues, and AAGPBL financial records, Haupert has perhaps become the foremost authority on the long history of baseball’s evolving economics.

Haupert grew up in Dubuque, Iowa, where he quickly became a Cubs fan. Dubuque was one of the first cities wired for cable, and Haupert would catch the Cubs on TV when he came home from school. He stayed in Dubuque for his undergraduate degree at Loras College before heading to Washington University in St. Louis for his advanced degrees. As a graduate student Haupert first applied baseball to one of his assignments, using city size and games won to predict attendance. While he was in college, the first Rotisserie baseball book came out, and Haupert and friends set up a league that lasted for 26 years.

In 2000 Haupert traveled to Cooperstown to see what financial information might be available, particularly relative to salaries. He was serendipitously introduced to the Yankees’ financial ledgers, which required a significant amount of deciphering to formulate meaningful interpretations. From this research Haupert published a couple of groundbreaking studies: “Pay Ball: Estimating the Profitability of the New York Yankees, 1915–1937” (with Ken Winter), and a three-part series, “Purchasing Pennants: the New York Yankees Then and Now.”

During his semiannual trips to Cooperstown, Haupert was further introduced to the vast and broadly untapped collection of player contract cards. Over a number of years and many trips to the Hall, Haupert collected the data off of these cards, creating a database of around 100,000 player seasons. (Many of these players never played in the big leagues—the salaries were contingent on the player making it to the majors. Cards likewise exist for non-playing personnel, including scouts and managers. Moreover, these cards help add to our knowledge of the history of the structure of baseball. Scouts, for example, were sometimes compensated based on how far a player advanced through a team’s farm system.) The data on the cards included all the information filled into the blanks on a player’s contract, including his salary and provisions outside the standard language such as bonus clauses. The cards also list player transactions and occasionally purchase prices. Haupert has made the salary information publicly available through Baseball-Reference.com.

In 2018 Haupert synthesized much of his financial research from the 1920s when he coauthored The Age of Ruth and Landis: The Economics of Baseball during the Roaring Twenties (with David Surdam). The book added important new economic insights outside Organized Baseball, such as Negro League financial information.

Business of baseball research has come a long way since 1991 when insufficient course material existed for Haupert to put together a class on the economics of sport. That instructors today have a wealth of information to use in such a class owes much to Haupert’s efforts to track down and catalog player salary information. We can only hope that Haupert will continue to use his research knowhow and interpretive skills to enlarge our business of baseball knowledge.