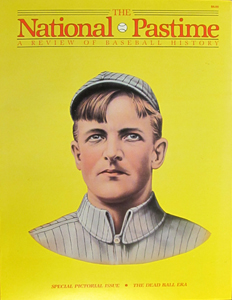 This article was published in the The National Pastime, Spring 1986

Two years after bringing you the first pictorial issue of The National Pastime, that one devoted to the nineteenth century, we turn the century to what is the game’s most beautifully photographed and arguably most exciting period.

Like conventional TNPs this is, as the logo proclaims, “A Review of Baseball History,” but with the key differences that the period under review is narrowly defined and that here text exists to illuminate the pictures, which are the principal means of telling the story. This is not a ” pictorial history” like those abounding in the bookstores but a time travel machine-put yourself in the cordoned crowd at Baker Bowl … or at third base, dodging Cobb’s flashing spikes … or at the bat, steeling your nerve as The Big Train whips his arm plateward. This is the way it was.

The dead ball era of 1901-19 produced new leagues, new stars, new styles of play, and a new level of popularity.There were good guys like Matty and Johnson, and bad, like Gandil and Chase; free spirits Waddell and Schaefer and troubled souls Cobb and Pulliam; scrappy runts Evers and Maranville and demigods Lajoie and Wagner. There were spitballs and shine balls and shutouts galore; stolen bases and sacrifice bunts and tons of triples; and, in the shadows, black men playing the game and waiting for change.

With a revived national economy and the advent of the American League, professional baseball experienced an unprecedented boom at all levels. From the warring majors emerged a stable structure of sixteen franchises that remained in place for fifty years — despite a challenge from a new rival in 1914-15, a World War, and a scandal that shook the game to its foundation. In the years 1901-19 baseball on the field and off was fiercely competitive, tempestuous, and gloriously gritty. That climate, that intensity, that love for the game leap from these pages.

In The Glory of Their Times, that glowing oral history of baseball and America before World War I, Larry Ritter concluded his preface with: “This, then, is the way it was. Listen!” We conclude in tune:

Over 200 images, most never before published, are on display. The editors have visited many institutions and individual collectors over the past two years and examined thousands of vintage photographs before selecting these. Photographer Mike Saporito has been an invaluable part of this effort. Tom Heitz and Howard Talbot of the National Baseball Hall of Fame contributed their time, expertise, and resources with unfailing good will, as they have in previous projects originating with the Society for American Baseball Research. (Furthermore, the National Baseball Library is making available low-cost, high-quality prints of all images herein credited as “NBL”; see page 86 for details.)

Special thanks go to three SABR members who opened their doors to TNP so that others might share in the pleasure of their vast collections. Barry Halper, a notable contributor to the 1984 pictorial, this time permitted us first publication of his unique view of a teenaged Babe Ruth in action (page 72). George Brace opened his archives to our scrutiny and showed us every kindness. And Dennis Goldstein graciously made available to us his unrivaled collection of dead ball era rarities, never before on public view.

And a sincere appreciation to the good people at Ag Press who have done such a fine job with all SABR publications, and extended themselves further for this one. To Dean Coughenour, Deb Wilds, and Renee Whitney — thanks.

Click the cover image to download the PDF edition of the Spring 1986 The National Pastime (Volume 5, No. 1) to view this special pictorial issue in its original formatting: