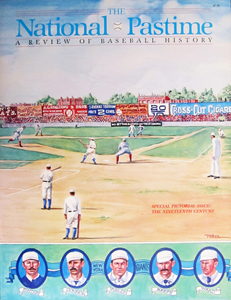 This article was published in the The National Pastime, Spring 1984

This is not a magazine. It is a peephole to the past, a magic lantern show of baseball the way it was. How the game was born, how it grew, who did what and when and where — these things have been told often enough. But what was it like to be there, to pick a grounder off that rutted sod, to wave in vain at a Rusie thunderball, to scheme with Cartwright at the Elysian Fields? Words fail; we want to see.

This edition of The National Pastime is, like its predecessors, “A Review of Baseball History,” but with several obvious differences: The period under review is confined to the nineteenth century; there are no essays, no features, no statistics; and, most important, pictures do not serve to illustrate text — rather, text exists only to illustrate pictures. The editors have attempted to create not a pictorial history of baseball’s early years but an imaginary museum or gallery through which we may perceive history in the round. If this experiment meets with favor, TNP will extend the project next year to the deadball era of 1901-19, with an eye toward creating, eventually, an iconography of baseball.

Some 275 pictures are packed into these pages; the editors, scouring over institutional and private collections over the past two years, came upon many times that number and to cut the roster had to harden their hearts. Much detective work, involving not only the history of baseball but also that of photography, went into identifying and dating the images we found. Because picture research in this period is more difficult than in the twentieth century, success is more rewarding.

While the undersigned editors take credit/blame for this issue, many hands have made light the work. Tom Heitz and Howard Talbot of the National Baseball Hall of Fame and Museum contributed their time, their expertise, and their resources in cooperation with the Society for American Baseball Research. (Furthermore, the National Baseball Library is making available, at low cost, high-quality prints of all images credited as “NBL” in this issue; see page 87 for details.) Cliff Kachline, SABR’s executive director, provided guidance on matters financial, historical, and practical. Dean Coughenour of Ag Press was of inestimable help as always, a steady hand on the wheel when this project threatened to careen onto the rocks. Jim Sours, also of Ag Press provided vital help in the hectic 11nal weeks of production. Thanks as well to Jerry Malloy, Jim Smith, Bill Felber, Frank Phelps, John Pardon, Joe Overfield, Dale Collett, Frank Steele, Bill Humber, Jim Kosinski, Joe Levy, and Mike Saporito.

We extend special appreciation to three SABR members who made their sizable collections available to TNP so that others might share in the enjoyment of their nineteenth-century rarities. Barry Halper is justly celebrated for his cornucopia of baseball treasures; equally abundant are his generosity, curatorial skill, and love of the game. Lew Lipset, another conscientious collector who appreciates the role that hobbyists play in preserving important historical material, has photographed every early artifact that came his way and provided copy prints to TNP. And Bruce Foster graciously allowed us to photograph his collection at no little inconvenience to himself.

COVER: The dazzling painting by SABR member Dick Perez was created for this issue of TNP and is entitled “The National Pastime: Opening Day-The Polo Grounds, April 29, 1886.” It stops time at a precise moment in history, a moment captured on glass in the “detective camera” held by spectator Richard Hoe Lawrence (see pages 50-51). It is the bottom of the fourth inning of a game between Boston and New York: Hoss Radbourn is on the mound, making his debut as a Red Stocking; Mickey Welch is at bat;John M. Ward is on deck-play ball! For information about the large-size, limited-edition print of this image offered by the Perez-Steele Galleries, see page 88.

INSIDE FRONT COVER: Five silk banners of the 1860s, of the type worn on a player’s sleeve on game day. Because of their extreme fragility, only a handful of “silks” have survived the passage of time. Also, four medals: the top two are Boston “rooters ” badges; the one at the bottom right was presented to Roger Conner by the Evening World for hitting the 11rst ball over the wall at the original Polo Grounds; and the remaining pin was worn by members of the amateur Gotham Base Ball Club of New York (originally called the Washingtons), the next organized after the Knickerbockers. Why the strange engraving? “Three wise men of Gotham went to sea in a bowl,” went the Mother Goose rhyme; “if the bowl had been stronger, then my ryhme had been longer.” (CREDIT: NBL, all.)

INSIDE BACK COVER: A cigar label from about 1888, the heyday of baseball in color lithography; the players depicted are Adrian Anson and Tim Keefe. (CREDIT: Lew Lipset.)

Click the cover image to download the PDF edition of the Spring 1984 The National Pastime (Volume 3, No. 1) to view this special pictorial issue in its original formatting: