This article was published in the 1981 Baseball Research Journal

The new era of increased base stealing launched about 20 years ago by Luis Aparicio and Maury Wills has reached a level of activity and proficiency that compares very favorably with the earlier era of base stealing which stretched from 1900 to about 1925. Some remarkable player, team, and league base stealing records have been achieved in recent years which would have been thought impossible in the climate of the early 1950s. Much of this credit should go to the influx of Black and Latin players who have dominated the new running game.

In 1978, for example, National League players stole 1533 bases and were caught only 725 times, a record success rate of 68 percent. Compare this with 1921 when the league had 803 steals and 771 caught stealing, a success rate of only 5 1 percent. In 1976 the Oakland A’s stole a record 341 bases. They were thrown out 123 times, but this was not a major league mark for caught stealing. In 1924 the Cubs were thrown out 149 times while stealing only 137 bases. The theft record of the A’s was very good in 1976, particularly in light of their great activity, but the Cincinnati Reds that same year did considerably better. Led by Joe Morgan, they stole 210 bases and were caught only 57 times. Their success rate was 79 percent compared to 48 percent for the 1924 Cubs.

Full documentation is lacking to compare base stealing proficiency of different eras. The National League, for example, kept caught stealing records only for the periods 1920-25 and 1951 to the present; the American League has caught stealing data from 1920 to the present with the exception of 1927. The one great record from the old days that has not been surpassed is the 1922 season record of Max Carey of the Pirates. He stole 5 1 bases and was thrown out only two times. He did this in a season where National League players overall were successful in only about 54 percent of their attempts (755 SB to 634 CS). Carey’s great success had to balance out the futile effort of players like Pat Duncan, for example, who stole 12 sacks in 40 attempts.

Lou Brock’s especially big season in 1974 is also cited, not so much because of the percentage (118-33) but because of the sheer magnitude of the effort. He made 151 attempts that season, averaging almost one per game, and seemingly would have been a logical candidate for the most caught stealing record. Ironically, the NL record is still held by Miller Huggins, who in 1914 was caught stealing 36 times while stealing only 32 bases.

Cobb still holds the American League record by being thrown out 38 times in 1915 when he was swiping 96 bases. Clyde Milan was 88-33 in 1913. Willie Wilson and Maury Wills show up very well in a comparison of the most active runners of this century. Wilson’s percentage figures for both 1979 and 1980 and Wills’ first big effort of 104-13 in 1962 were really outstanding. The 1980 records of Rickey Henderson (100-26) and Ron LeFlore (97-19) also were remarkable considering how frequently they were running.

Both Willis in 1962 and Wilson in 1979 and 1980 led in theft percentage even though they had a very high number of attempts. Such an outstanding performance is unusual, as can be seen in the accompanying tabulation of those players since 1920 with the best annual steal percentage. The compilation is based on at least 20 attempts for a 154-game schedule and 21 for the 162-game slate. In the second column at right are listed the players caught stealing the most each season. To put their sometimes futile efforts in perspective, we have listed also their number of thefts. Note that in the National League in 1962, Wills and Bill Virdon led in caught stealing with 13. Wills, however, had 104 steals to only five for Virdon. It also should be noted that in a few seasons the player with the most caught stealing nevertheless had the highest stealing percentage. See for example Willie Mays in the NL in 1956 and Luis Aparicio in the AL in 1964. 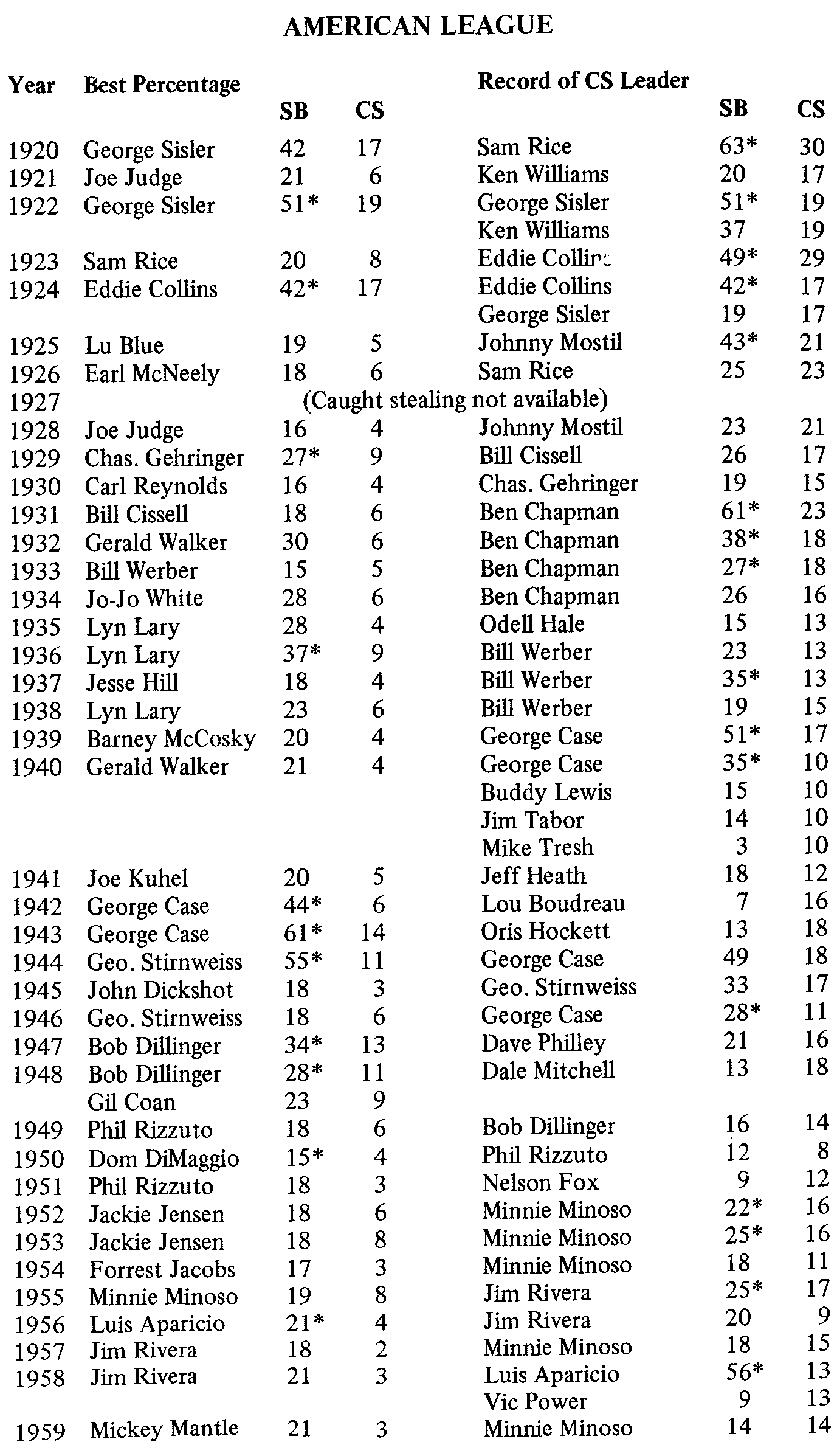 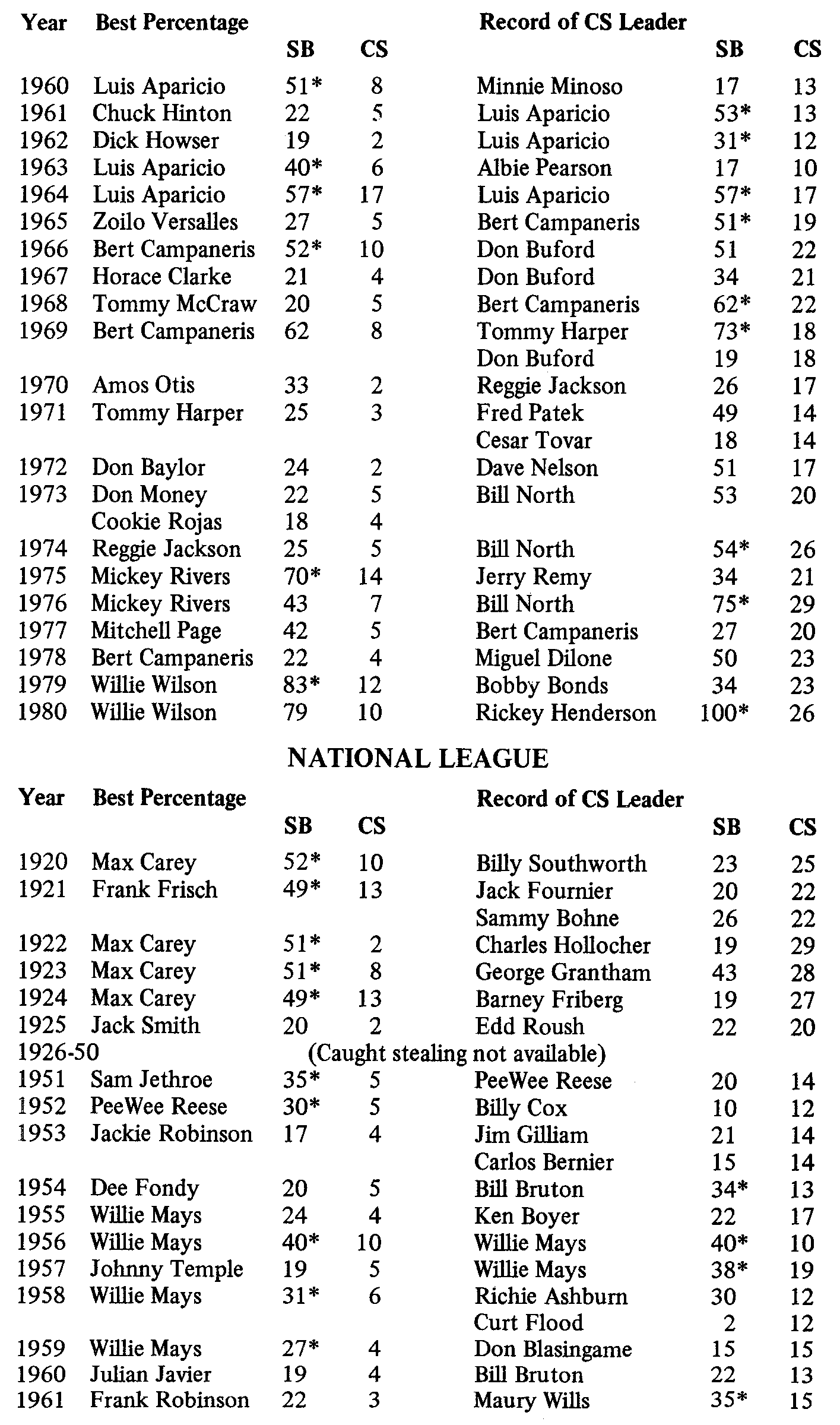 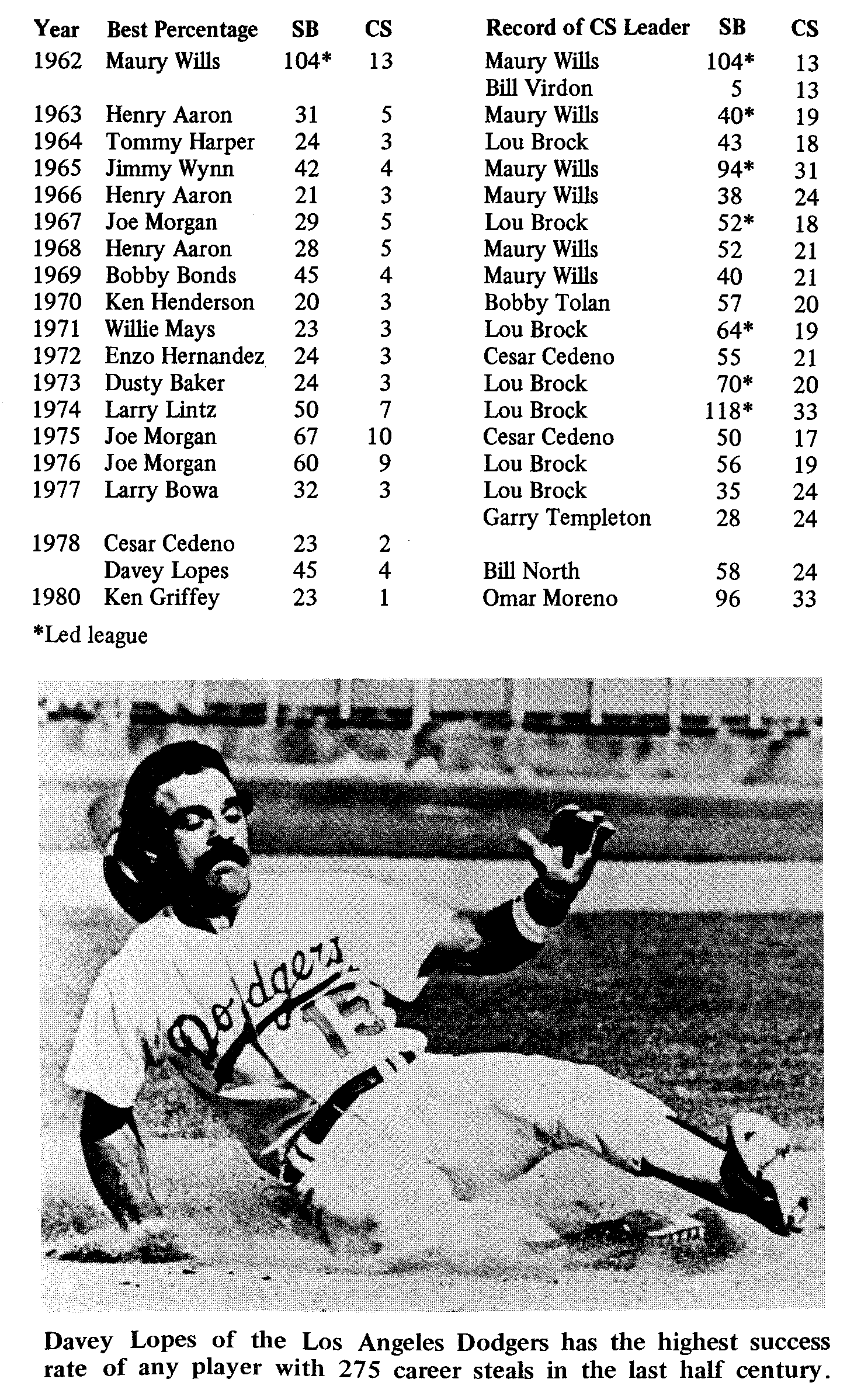 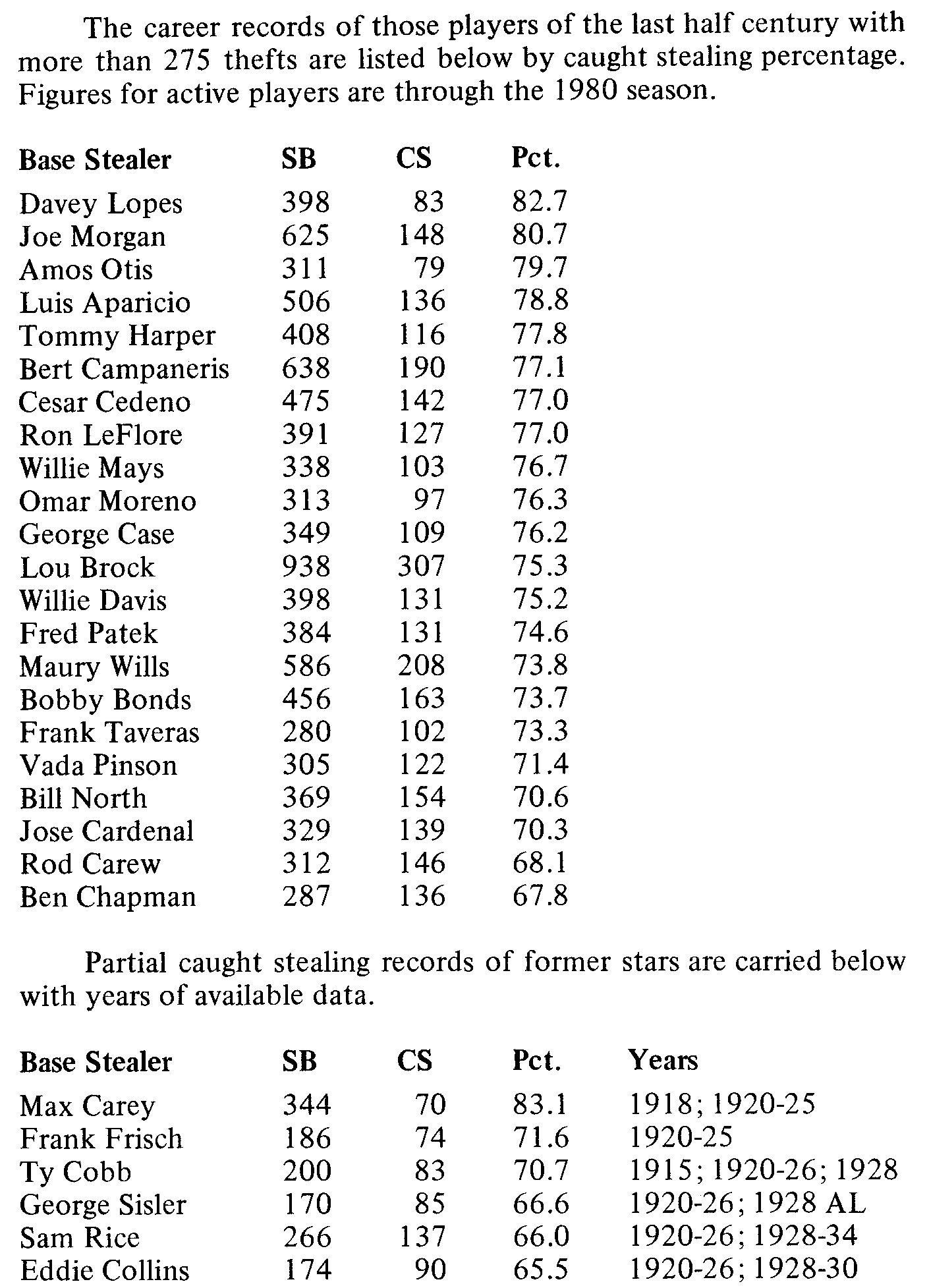