At the SABR National Convention in Milwaukee in July 1983, one of the baseball research questions was: Who was the only major league player to hit a home run before his 20th birthday and after his 40th birthday? It would have to be someone with a long career. Was it Rogers Hornsby? (No.) Al Kaline? (No.) Brooks Robinson? (Not quite.) Robinson hit one homer in 1956 as a 19-year-old, and the last one he hit was April 19, 1977, a month shy of his 40th birthday.

The only player to do it was Ty Cobb, who holds on firmly to this distinction while a number of his other records fall to the wayside. Cobb hit one homer for Detroit in 1905 when he was 18; another in 1906 when he was 19. With the Athletics in 1927 he connected five times when he was 40, and once in 1928 when he was 41. This gave him a record 24 consecutive seasons with at least one roundtripper. Rusty Staub could join Cobb if he plays next year when he will be 40. Staub hit six homers in 1963 when he was 19.

This constitutes a radical change. In fact, if any assessment had been made a generation ago, the number of teenage homers hit up to that point would have been as great as those hit after age 40. Mel Ott still was the career leader with 19 hit before age 20, while Cy Williams led the 40-year-olds with 17. The change did not occur overnight. Tony Conigliaro hit 24 four-baggers as a 19-year-old rookie in  1964. But the longevity of players like Ted Williams, Stan Musial, Willie Mays and Henry Aaron soon spelled the difference. The comparison between young and old home run hitters has become so unbalanced that over the last eight seasons players over 40 have been responsible for more than 110 home runs while not one teenager has connected.

Carl Yastrzemski, who closed out his long career at the age of 44, really dominated the graybeards since turning 40 on August 22, 1979. He has hit 49 homers since then, moving past the old standards of Stan Musial (46), Ted Williams (44), and Henry Aaron (42). On an annual basis from birthday to birthday, Carl has set new marks for home runs hit as a 42-year-old (16), and 43-year-old (12). Aaron still holds the record at age 40 with 20 homers and Ted Williams had a very productive year with 26 circuit smashes at age 41.

Who was the oldest player to hit a home run? Although there is some disagreement about the birth year of Cap Anson — 1851 or 1852 — we accept the recommendation of the SABR Biographical Research Committee and go with the latter date. Anson closed out his remarkable career in a twinbill with St. Louis on October 3, 1897. He hit two roundtrippers in the first game (and stole a base in the second game). He was 45 years and about five months old at the time. That would make him six months younger than hurler Jack Quinn was when he connected on June 27, 1930. Quinn, then a (legal) spitball pitcher with the Athletics, was little more than a week away from his 46th birthday.

The teenagers had much less time in which to achieve their long-ball status. Only one player hit a home run at 17 and this was Tommy Brown of the Brooklyn Dodgers. He connected off Preacher Roe of the Pirates on August 20, 1945, at Ebbets Field. He belted another one a week later. Phil Cavarretta hit eight at age 18, and the aforementioned Tony Conigliaro hit 24 as a 19-year-old. It is interesting that Tony, the teenage leader, and Yaz, the post-40 beliringer, were teammates on the Boston Red Sox.

Conigliaro has another distinction in that he was the youngest player to hit a home run with the bases loaded. It came off Dan Osinski of the Angels on June 3, 1964, when Tony was 19 years and five months. He was a month younger than Al Kaline was when he hit his first grand slam June 11, 1954. Cap Anson was easily the oldest to hit a grand slam. The Chicago NL player-manager was 42 when he connected on August 1, 1894. He was almost one year older than Honus Wagner was when the Pirate shortstop chased three other Buc players around the bases with an inside-the-park job on July 29, 1915. Henry Aaron hit two slams in 1974 when he was 40.

All the players who hit home runs before their 20th birthday and after their 40th are listed below. Included are the youngest and oldest to hit grand slams.

Note: All stats through the 1983 season. 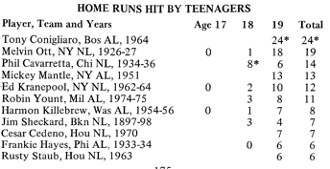 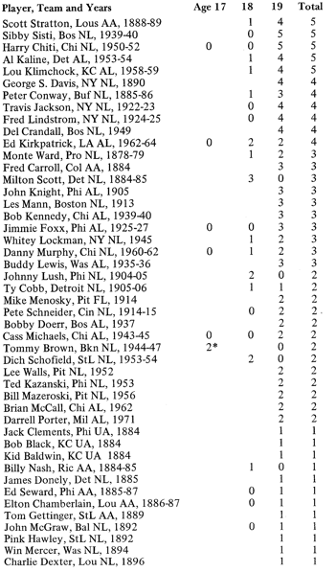 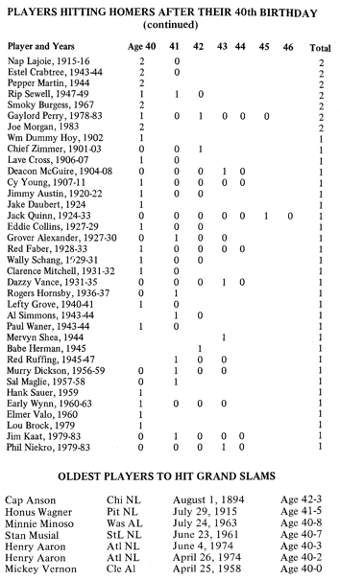 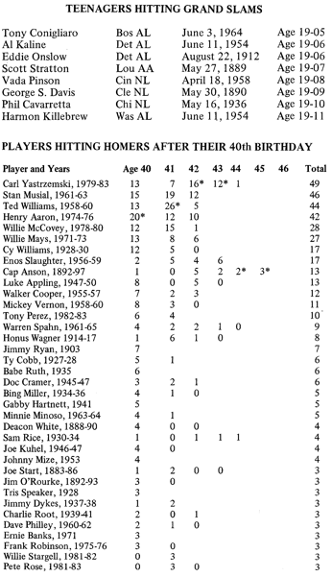