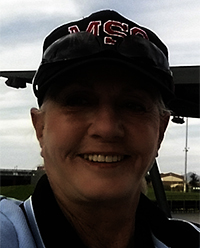 On behalf of SABR’s Women in Baseball Committee, I’m pleased to announce the inaugural winner of the Dorothy Seymour Mills Lifetime Achievement Award is longtime umpire and promoter of women in baseball, Perry Barber. Please join us in congratulating Barber for winning this award and thanking her for all she has done for 38 years to promote women’s baseball and create opportunities for women to be a part of the game.

Continuing a tradition of female umpires that stretches back to Amanda Clement in the early 1900s, Barber has umpired around the world at every level of the game. No matter where she is, she is a constant champion of women and their participation in America’s National Pastime. Barber will be presented with her award this June at the SABR 48 national convention in Pittsburgh, Pennsylvania. The award will be presented to her by Dorothy Seymour Mills, the woman for whom the award is named. We hope you can join us for this ceremony.

This year’s recipient, Perry Lee Barber, has been a professional umpire since 1981, umpiring more than 6,300 games to date. She and her twin sister attended umpire school when women were not wanted and her perseverance paid off with her graduation. Barber has umpired at all levels of the game, including Major League Baseball’s spring training. Her umpiring has taken her around the world to places such as Japan, Guam, Hong Kong, and the Caribbean.

Comments from the selection committee affirm our choice of Perry Barber for this award:

In addition to Barber, the other finalists for the 2018 award were baseball player and scout Edith Houghton, Canadian national women’s team player Ashley Stephenson, and baseball player, coach, and advocate Justine Siegal.