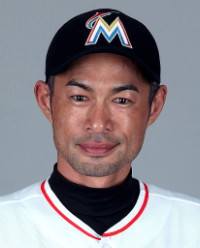 The SABR convention ballgame is no stranger to historic events. Tonight, everyone in attendance at SABR 46 in Miami has a shot at seeing another milestone.

Ichiro Suzuki of the Miami Marlins is now just two hits away from the 3,000-hit milestone after recording No. 2,998 on Thursday night, a pinch-hit double in the seventh inning against St. Louis Cardinals reliever Jonathan Broxton. The Marlins announced after the game that the 42-year-old outfielder would be in the starting lineup tonight — which just happens to coincide with our annual SABR convention ballgame — setting the stage for Ichiro to possibly become the 30th player in Major League Baseball history to reach the coveted mark.

Before the game, our special SABR 46 ballpark session is scheduled to take place at Marlins Park, where we will hear from  Barry Bonds, one of baseball’s all-time greatest players and now the Marlins hitting coach; Don Mattingly, the Marlins first-year manager and a former All-Star first baseman; Andre Dawson, Hall of Fame outfielder; Tony Perez, Hall of Fame first baseman; and his son Eduardo Perez, an ESPN analyst and former major-leaguer. The sessions will be moderated by SABR President Vince Gennaro and MLB.com’s Barry M. Bloom.

If Ichiro does reach 3,000 hits tonight, it would continue a long tradition of memorable moments at SABR convention ballgames.

At our 2011 convention in Southern California, we witnessed Mike Trout’s first major-league hit at Angel Stadium — just hours after Derek Jeter homered for his own 3,000th hit across the country in New York. In 1999 at SABR 29 in Arizona, we saw St. Louis Cardinals rookie Jose Jimenez pitch a 1-0 no-hitter in a thrilling duel against future Hall of Famer Randy Johnson of the Diamondbacks. And back in 1978, the eighth annual SABR convention was highlighted by Old-Timers’ Day at Yankee Stadium, where Billy Martin, fired as Yankees manager a week earlier by owner George Steinbrenner, shocked the baseball world when it was announced that he would return to the helm for the 1980 season.