As the baseball world celebrates the annual Jackie Robinson Day on April 15, we'd like to share a few stories from the SABR archives on the Hall of Fame pioneer. 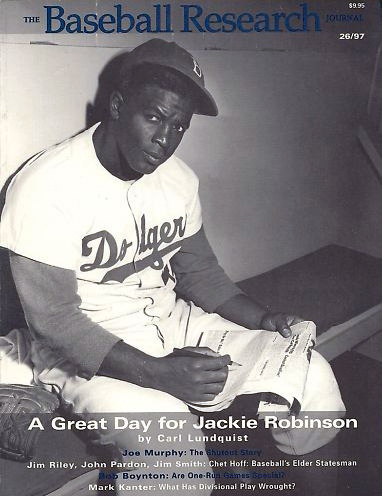 As Lyle Spatz wrote in this article for the SABR Games Project, "Jackie Robinson’s major league debut was more than just the first step in righting an historical wrong. It was a crucial event in the history of the American civil rights movement, the importance of which went far beyond the insular world of baseball."

Clyde Sukeforth served as the Brooklyn Dodgers' interim manager on April 15, 1947, when Robinson made his historic debut at Ebbets Field. Sukeforth happened to be in the right place at the right time — just days before, manager Leo Durocher had been suspended for the entire season by Commissioner Happy Chandler for associating with gamblers. Sukeforth's entire managerial tenure lasted two games, but he gets credit for being the first manager of an integrated major league team in the modern era.

In an excerpt from this interiew with C.E. Lincoln for the Baseball Research Journal in 1987, Sukeforth describes Jackie's abilities and his experience on Opening Day:

"I'd have to say at that point that he was the most extraordinary athlete I'd seen play the game. He could've played any of three sports he played in college, as you know. He could've played pro football or basketball. He was just a great athlete. And to make his debut at first base was really something. Here was a guy who was supposed to be a second baseman and he started out over at first base. ...

"Anyway, I remember writing out the lineup card, didn't think anything special of it. I just wanted to follow what Mr. [Branch] Rickey and Durocher wanted. I guess I have a copy of it somewhere around. ... There were all sorts of photographers and newsreel cameras around home plate, all around the park. I felt the excitement. It was Opening Day and all that, but there was so much more going on."

Next, we have an article from The National Pastime #10 in 1990, written by SABR member John Thorn — Major League Baseball's Official Historian — and the late Jules Tygiel, author of the groundbreaking book Baseball's Great Experiment: Jackie Robinson and His Legacy, first published in 1983.

Here, the authors detail the discovery of photographs taken during a then-secret October 1945 workout at Lane Field in San Diego in which Robinson and two other players from the Kansas City Royals, a Negro Leagues all-star team, were participating. You can see some of those photographs, taken by Look photographer Maurice Terrell, in the PDF of the article below.

In an excerpt from the article, former Negro Leagues pitcher Chet Brewer recalls the clandestine workout:

"Brewer recalls that Robinson and two other Royals journeyed from Los Angeles to San Diego on a day when the team was not scheduled to play. He identified the catcher in the photos as Buster Haywood and the other player as Royals third baseman Herb Souell. Souell is no longer living, but Haywood, who, like Brewer resides in Los Angeles, has vague recollections of the event, which he incorrectly remembers as occurring in Pasadena. Robinson had befriended Haywood the preceding year while coaching basketball in Texas. He recruited the catcher and Souell, his former Monarch teammate, to 'work out' with him. All three wore their Royal uniforms. Haywood found neither Robinson's request nor the circumstances unusual. Although he was unaware that they were being photographed, Haywood still can describe the session accurately. 'We didn't know what was doing on,' he states. 'We'd hit and throw and run from third base to home plate.' "

To view more articles from the Baseball Research Journal or The National Pastime archives, visit sabr.org/research.

This article has been modified from its original version.