This article was written by Brian Wood 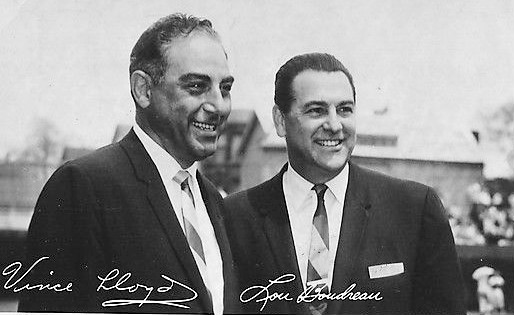 From the mid-1960s to 1980s, Vince Lloyd and Lou Boudreau brought Cubs games to life for legions of fans.

Vince Lloyd Skaff was born June 1, 1917 in Beresford, South Dakota. His parents, Michael T. and Lula (Salem) Skaff, were Lebanese immigrants who owned a family bakery. He had three brothers (Francis, Alfred and John) and a sister (Helen). After graduating from Beresford High School and a stint at South Dakota State University, Skaff transferred to Yankton College on the South Dakota/Nebraska border, a school whose most renowned sports alumnus, along with Lloyd, was NFL All-Pro defensive lineman Lyle Alzado. At Yankton, Vince played tackle on the football team and met his future wife, Miriam (Jacobson). The couple participated in local theater and radio dramas and co-starred in a production of Shakespeare’s “Macbeth.” They were married on January 2, 1941, in Bloomington, Illinois.

Skaff graduated from Yankton in 1940 with a degree in journalism. (He would later serve as a fundraiser for the college when it was going through financial difficulty. The school closed in 1984 and is now the site of a minimum-security federal prison.) Seeking a career in radio, he successfully auditioned with KTRI in Sioux City, Iowa by describing an imaginary parade in a manner said to be so realistic that the interview was curtailed—the trombones became too noisy. At KTRI, where Lloyd called games for the Sioux City Soos of the Class D Western League, he dropped his surname and became known as Vince Lloyd. He eventually moved to WJBC in Bloomington, Illinois and then to WMBD in Peoria before joining the U.S. Marines in April of 1942.

Serving in World War II, Lloyd advanced from private to lieutenant before being discharged in March of 1946. After returning to WMBD, Lloyd moved to WGN in Chicago in September of 1949, spending the next 38 years there on both radio and television.

From 1954-64 Lloyd partnered with Jack Brickhouse on Cubs and White Sox telecasts, doing some play-by-play and hosting pre-game shows. An impromptu pre-game television interview with President John F. Kennedy on Opening Day 1961 at Washington’s Griffith Stadium—the first such interview ever conducted at a baseball game—became Lloyd’s defining moment during his years at WGN. The interview almost did not take place, as the Secret Service had not been consulted and would not allow Lloyd access to the president. But after Illinois Senator Everett Dirksen, who was part of the presidential party, waved to him, Lloyd pushed past an agent and started his interview. Hoping for two minutes, he got 15. Lloyd declared, “I was so excited I had to study the tape later to find out what the President had said to me.”1 Asked if Mrs. Kennedy was coming to the game, President Kennedy answered, “No... it’s Monday, and she has to stay home and do the laundry.”2

During spring training 1965, Cubs radio play-by-play man Jack Quinlan died in an automobile accident. Quinlan’s partner, Boudreau, encouraged Lloyd to move to the radio booth. He did and they would spend the next 23 years as the radio voices of the Cubs.

Known as “The Voice for all Seasons,” Lloyd announced events for the Chicago Bears, DePaul University basketball, professional wrestling, and became the first broadcaster of the Chicago Bulls, teaming with Boudreau. Fans could not get enough of “Vince and Lou.” Many would listen to Big 10 football broadcasts just to hear their banter. After Boudreau died in 2001, Lloyd acknowledged, “Most of what I know about baseball I learned from Lou. I can't imagine there's ever been a better baseball analyst.”3

Lloyd was recognized not only for his deep, distinctive baritone voice, but his vivid descriptions in a “straightforward, concise, and grammatically correct” manner:4 “Ground ball to short... Kessinger to his left... over to Banks for the out.” 5 Lloyd’s tone immediately let fans know if the Cubs were winning or not. “Holy mackerel!” became his signature home run call. Lloyd’s favorite memories during his Cubs years included Don Cardwell’s 1960 no-hitter, Sandy Koufax’s 1965 perfect game (in which Cubs pitcher Bob Hendley pitched a one-hitter), and the 1969 Cubs team, which led the National League East for most of the season before slumping late in the year and losing out to New York’s Miracle Mets.

One night during an interview, Lloyd let Hall of Fame wrestler Vern Gagne use his famed “sleeper hold” on the broadcaster. Lloyd passed out for eight or nine seconds and needed to be carried from the ring.

Before an interview with infielder Connie Ryan, Lloyd suggested he ask how players compare the AL and NL. Ryan readily agreed. However, when asked live, Ryan spouted “That’s a very unfair question, Vince!”6

When interviewing balding first baseman Vic Wertz, Lloyd offered him a sample of the sponsor’s hair product, in a miniature bottle.

Lloyd once ran afoul of White Sox manager Paul Richards during an interview with pitcher Harry Dorish, who revealed details of a secret palm ball/“cosmic” pitch. The camera even showed a tight close-up of it.

Manager Eddie Stanky of the St. Louis Cardinals, given a watch for being interviewed before a game in 1954, professed, “I’m going to put the watch on right now for luck.” The Cubs then crushed the Cards, 23-13. Lloyd remarked, “I haven’t been within 100 yards of Stanky since.” 7

In 1981: “I’d like to talk about the Cubs’ successes, but I’m supposed to talk for more than a couple of minutes. We have a nice bunch of guys, I’ll say that. The opposition certainly loves them. The St. Louis Cardinals wanted us to stay over and play another game.”8

In 1982 there was speculation as to whether or not Lloyd and Boudreau would be rehired. Ray Sons, Chicago Sun-Times sports editor, wrote, “Vince and Lou are not plastic media personalities, but people whose gentle warmth has made them seem part of the family to generations of Cubs fans. WGN seems to be getting ready to shove Vince or Lou, or both, out the back door.”9 In the end, however, both returned; Milo Hamilton took over the play-by-play duties while Lloyd delivered radio commentary and hosted pre/post-game shows. He also teamed up with longtime WGN executive director Jack Rosenberg to enlarge WGN’s radio network to over 6- stations. “Vince was very effective, especially dealing with managers of smaller stations,” said Rosenberg, who had first worked with Lloyd back in Peoria.10

Lloyd retired with Miriam to South Dakota in 1987, periodically returning to the booth (including subbing for an ailing Harry Caray in 1994). Miriam passed away in 1999. Lloyd later reconnected with an old friend, Myrtle “Myrt” Giblen. Offering to sell her Miriam’s Oldsmobile, he traveled to Tucson where they fell in love and married in June 2000.

In March 2002, Lloyd reflected on his fellow broadcasters, “I cherish the memories of each...and I think I’m as lucky as any can be to have worked with them and to have been friends with them. What more can you ask?”11 In January 2003, Vince and Myrt drove to Scottsdale, Arizona to be with former Cubs player/broadcaster Ron Santo when the Hall-of-Fame announcements were made.

Lloyd died on July 3, 2003 in Green Valley, Arizona after a battle with stomach cancer. Survivors included son Michael John Lloyd of Deadwood, South Dakota. Jack Rosenberg remembered Lloyd, who had helped entertainer (and fellow Lebanese-American) Danny Thomas spearhead the effort to support St. Jude Children’s Research Hospital in Memphis: “His heart is as warm as the Lebanese sand of his ancestors. Vince was a fantastic man, very compassionate and charitable. Everybody was his friend. Vince did not rip players or managers on the air. That was just not part of his style. And his voice was one of the best.”12 Lloyd’s grand-nephew, Rich Williams, arranged for a baseball signed by Lloyd’s family to be placed in his casket before his burial.

Pundit Mark Rhoads praised Lloyd’s “contagious enthusiasm in his voice no matter what the score or the weather. If the home team was gaining or ahead, the voice became turbo-charged. There was little adversity that could get him down.” 13

The Cubs honored Lloyd on July 4, 2003 with a moment of silence at a Cubs-Cardinals game. It was perhaps appropriate that one who entertained millions with the spoken word should be honored by no words.

In May of 2017, a week before what would been his 100th birthday, Lloyd was enshrined in WGN’s Walk of Fame along with longtime colleagues Boudreau and Rosenberg.

Yellon, Al. “The Score didn’t make much news this week, so here’s a look back at a beloved Cubs radio crew from the past,” bleedingcubbieblue.com, https://www.bleedcubbieblue.com/2016/3/14/11214132/the-scoreboard-a-nostalgic-look-back-at-vince-lou, retrieved February 12, 2018.