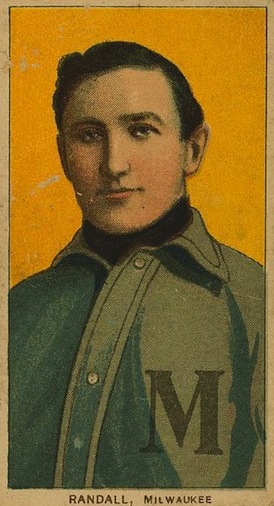 Outfielder Newt Randall was one of many forgettable ballplayers who had a promising minor-league career, got a shot at the majors, and then faded away, never to return to the big leagues. He reached the majors at the age of 27 and played just one season, splitting the 1907 season between the Chicago Cubs and the Boston Doves in the National League. Injuries, a .915 fielding average, and a batting average barely above .200, resulted in his demotion back to the minors, where he continued to play until his early 40s.

Newton John Randall was born on February 3, 1880, in New Lowell, Ontario, Canada, one of nine children born to William and Flora Ann (McDonald). His parents were of Scottish ancestry. When Newt was 2 years old, his family moved to Duluth, Minnesota, where his father worked as a horse trainer.1 As a teenager and young man, Newt played baseball on the local sandlots and with amateur clubs in Duluth.

Randall broke into professional baseball in 1902 with Cavalier, North Dakota, in the independent Northern League. The next year, when the Northern League was placed under the umbrella of Organized Baseball with a Class D designation, Newt played with Winnipeg, Manitoba. In May 1904 he was traded by Winnipeg to his hometown Duluth White Sox, also in the Northern League, and hit .336 in 67 games. After one season in Duluth, Randall was sold to the Denver club in the Western League, who won a bidding war with Portland and Sioux City, Iowa. Newt proved he could hit Class A pitching, batting .296 in 1905 and .344 in 1906.

While in Denver, Randall showed the first sign of his combative nature on the ballfield. In a game in 1906, after a dispute over a call, he grabbed and held umpire Schuster while a teammate named Perrine punched the ump in the face. That night both Randall and Perrine were arrested and fined $10 in police court and both were subsequently suspended for three days by the league president. Schuster didn't fine either man for assaulting him because Randall threatened that if he were fined, he would send Schuster to the hospital, and Perrine said “I think he would have done it too.”2

In August 1906 Frank Selee, former manager of the Chicago Cubs (of which Denver was a minor league affiliate), made a trip to Denver to watch Randall. He was impressed with what he saw and soon began negotiating the purchase of Randall's contract from Denver.3 On September 1 the Cubs drafted Randall from Denver in the Rule 5 Draft. It was thought he might get a call-up at the end of September, but instead he was invited to the Cubs’ training camp the next spring.

Randall played very well at the Cubs’ spring-training camp in New Orleans in the spring of 1907. The Winnipeg Free Press reported, “Newt Randall is showing fine form in practice with the Chicago Cubs. He is stinging the ball hard.”4 Sporting Life said, “Randall’s work is of excellent caliber, his hitting being weighty, and his base running fanciful.”5 His hometown newspaper, the Duluth News-Tribune, said of Randall “He is making good like a house on fire with the Chicago Nationals” and “It is a cinch that Randall is a fixture on the Windy City club.”6 Randall was the only rookie to make the Chicago team brought north by manager Frank Chance.

Randall got regular playing time in the Cubs outfield during the first two months of the season, but had trouble adapting to major-league pitching, and by the middle of June was batting just .205, at which point he was involved in what was called “The Fastest Trade on Record.”7 Before a game between the Cubs and the Boston Doves in Chicago on June 20, Randall’s name was written on the scorecard as the starting left fielder for the Cubs, and Boston’s Del Howard was slated to play right for the Doves. Before the game began, the two managers talked and Randall, along with teammate Bill Sweeney, was traded to Boston for Howard. Randall and Howard literally exchanged uniforms and took their respective places in the outfield for their new teams.8

Just like that, Randall went from a team that would go on to the World Series championship that year, and one of the best teams of the Deadball Era, to a Boston team that would finish in seventh place in the National League, 47 games behind the Cubs. Randall did appear in 73 games for the Doves but hit just .213. Injuries probably affected his playing time and success in Boston. In July he missed three weeks after wrenching his knee while sliding after hitting a triple off Christy Mathewson. In August he hurt his head badly when he “slid along the ground on his face” in a game with Pittsburgh.9 After the season, Boston tried to transfer Randall to the Trenton, New Jersey club, but eventually he was sold to the Milwaukee Brewers in the American Association.

Randall spent the next eight seasons (1908-1915) with the Brewers. He was a very consistent player in Milwaukee and soon became a fan favorite. The Milwaukee Journal wrote, “When the gallant Newt Randall dropped one, as he often did, ‘Hey Newt’ could serve a fierce criticism and the same call was high praise when he hit one.”10 In 1911 Randall had a 23-game hitting streak, then an American Association record.11 He was a key member of the Brewers’ American Association pennant-winning teams in 1913 and 1914, but never got another opportunity to return to the major leagues.

Randall kept busy during the offseason. Some winters he would remain in Milwaukee and other years he would return to the Duluth area. He was an avid hunter and a very accomplished bowler and one offseason worked in a bowling alley in Milwaukee. During another winter, he worked with his father’s horse-racing business, now relocated to Ashland, Wisconsin. When he returned to Minnesota, he helped organize, play in, and umpire indoor baseball games at the armory in Duluth. During the winter of 1909-1910, the Duluth indoor team played a series of games with an indoor team from Hancock, on Michigan’s Upper Peninsula. At some point, Newt met a young woman named Elizabeth Crowley of nearby Houghton, Michigan, and they were married on March 2, 1910.12

The ballpark in Columbus, Ohio, had an advertising sign on the outfield fence for a local insurance company offering a $1,000 life insurance policy to any player who hit a home run over the sign. Randall was never known as a home-run hitter (his season high was six) but when the Brewers came to Columbus in June 1910, he hit two homers over the sign, collecting two policies, worth $2,000.13 Then his season in Milwaukee ended early after a bout of blood poisoning in August. (While recovering, he received a message that his mother had also contracted blood poisoning and had died.)

In 1914 Randall missed jumping to the new Federal League by one day. He found himself a little short of money in February, and was given an advance on his salary for the next season by Milwaukee manager Harry Clarke, on the condition that he sign his Brewer contract, which he did. The very next day, King Cole of the Chicago ChiFeds arrived in Milwaukee and offered Randall twice what the Brewers were playing him, but Newt, already being under contract, had to refuse the offer. He even received a phone call from Joe Tinker, a former teammate and manager of the ChiFeds, trying to persuade Newt to jump his contract and join him in Chicago.14

After the 1915 season, Milwaukee owner A.T. Timme began selling off his best players and Randall was sent to Oakland of the Pacific Coast League on option until April 15. At Oakland he collected just one hit in his first 11 at-bats, and the Oakland Tribune said he was “slow rounding into shape,” though Randall claimed he was hampered by a twisted knee.15 Nonetheless, he was returned to Milwaukee before the deadline and subsequently was unconditionally released by the Brewers. He returned to his home in Duluth.

After weighing offers from Minneapolis and the Eastern League, Randall signed with the Duluth Northern League team on May 2. Because the club was over the league limit of four players with experience in higher-classification leagues, and because Randall commanded the highest salary, he was released on June 11. Records were found of him playing in six games for Duluth, going 6-for-23 (.261) with two doubles and two runs scored. After his release, he played in one game for neighboring Superior, Wisconsin, also of the Northern League, going 0-for-4. (These statistics were not previously included in his professional record.) On June 16 he signed with an independent club in Hibbing, Minnesota, where he finished the season.

Iron-ore-rich northern Minnesota was critical to the country's war efforts during the years leading up to and during World War I. Plentiful nearby natural resources and the harbor at Duluth-Superior made the area a leading steel manufacturing and shipbuilding center. Randall’s World War I draft registration card from September 1918 lists his employer as the Minnesota Steel Company of Duluth16 and there is no evidence of him serving on active duty during the war. Instead, Randall played in the Twin Ports Mesaba League. The four team semipro league was made up of employees of local shipbuilding and steel companies as well as miners, and attracted several quality players from the American Association, and even a few from the major leagues.

The league was quick to point out that players would be signed only if they “proved capable workers when not wearing their uniforms.” The Riversides, one of the teams Randall played on, reported that they had signed Wagner of the Pittsburgh Nationals. This was not Honus, but rather Bill Wagner, a backup catcher for the Pirates. The league did make “attractive offers” to Ty Cobb and Walter Johnson, reportedly offering Johnson $300 a game, but neither major-league star replied to telegrams.17

For the next few years Randall lived in Hibbing, where he was a county deputy sheriff and continued to play baseball with the local club. In 1922 he announced his retirement from baseball after 20 years, but agreed to play in one more game. A team that included former Milwaukee teammate Happy Felsch along with three other Black Sox, Buck Weaver, Swede Risberg, and Claude Williams, agreed to come to Hibbing for a game. The game was not played due to poor weather and Weaver and Risberg left town. However, Newt took Felsch and Williams on a fishing trip.18

Randall had one more season in Organized Baseball. Tom Shanley, a friend of his from the Iron Range in northern Minnesota, was named manager of the Bismarck Capitals in the North Dakota League in 1923. When the team started slowly, Shanley persuaded Newt to join him in Bismarck. The move appeared to pay off as Randall was batting over .400 his first couple of weeks with the team. However, Randall, now 43 years old, appeared to tire out and when he left the team in July for his home in Duluth, his average was down to .251.19

The 1930 US Census lists Randall as living in Duluth with his wife, Elizabeth, but with no other household members, so presumably, the couple never had children. Duluth city directories from the 1920s and 1930s list Randall’s occupation as a watchman and driver with the Minnesota Steel Company. Elizabeth died in 1943,20 and Newt lived in Duluth until his death on May 3, 1955, in a local hospital at the age of 75. He was survived by three sisters and is buried at Park Hill Cemetery in Duluth.