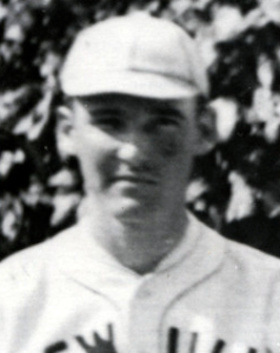 There have been a number of horribly inauspicious rookie debuts over the century and a half of major-league baseball. In 1901 Pete Loos threw 18 consecutive balls to start his only game. In 1945 Joe Cleary surrendered seven runs while recording only one out for a 189.00 ERA. On September 21, 1922, Doc Hamann arguably had the most ineffective debut of all. Hamann was recruited by Cleveland from semipro ball in New Ulm, Minnesota, and without any professional experience was sent in to pitch against the Boston Red Sox. He surrendered three walks, hit the opposing pitcher (ageless Jack Quinn), and gave up three hits before being relieved. He surrendered six runs without recording an out.

Elmer Joseph Hamann was born in New Ulm, in south central Minnesota, on December 21, 1900. He was the first child of Frederick and Dorothea (Greibel) Hamann. Frederick and Dora were first-generation Americans. Both sets of parents were immigrants from Germany who settled near New Ulm in the mid-19th century. Frederick was 33 years old and well established as a well-driller when he wed Dora in 1899. The couple took up residence in Frederick’s home in New Ulm. After Elmer, they had two daughters, Edna and Louisa, and another son Clarence. Elmer attended school in New Ulm and grew to be 6-feet-1 and very athletic. He led the New Ulm High School basketball team to the state finals in 1921. They were defeated 19-15 by Minneapolis; Hamann scored 13 of his team’s points and was named first team all-state.

In the summer of 1921, Hamann made his debut with the New Ulm semipro team.1 The squad consisted of local talent augmented by players with minor-league experience. There was no organized league, but the team played against teams from neighboring towns in southern Minnesota and the occasional barnstorming team. Hamann made his debut was May 24 when he pitched three innings in relief. By late August, he was taking his regular turn as a starting pitcher and twirled two one-hitters, including a 14-inning affair on way to a 16-6 record. The season ended in mid-September and Hamann packed his bags to attend St. Thomas College in Minneapolis.2 The local paper reported that he would study accounting.3

At St. Thomas Hamann played both basketball and baseball for coach Joe Brandy. Brandy had been the quarterback at Notre Dame and a teammate of George Gipp. He brought knowledge and enthusiasm to St. Thomas, where he taught mathematics and coached football, basketball, hockey, and baseball. Hamann earned a starting spot at forward on the basketball team and had success with his long shots (he canned four in a win in his first game), and at the free-throw line.4 The basketball team finished 8-4 in the league for second place. On the baseball diamond he defeated the University of Minnesota 1-0 on April 20 and struck out 14 in a 1-1 tie with Carleton College. He teamed with fellow freshman hurler Nick Riley to lead St. Thomas to the state collegiate baseball title. Hamann returned home in June and immediately joined the local squad. His hurling continued to be stellar; the New Ulm Review wrote, “Doc Hamann is a wonderful pitcher. At times he may be slightly wild, but he makes up for that in speed and break.”5 The paper also noted that he was a weak hitter, but in his season finale, against Hopkins, Minnesota, he had two hits and a run batted in.6 After the game he left for Cleveland.

Hamann was a part of “the most energetic drive for players ever put on” in Cleveland.7 For weeks Indians scouts had been watching players and making recommendations. As a result, 19 players were added to the roster and the team had trouble finding uniforms for all the new arrivals. The Indians had a strange late-season break in the schedule, September 25 through 29 and announced that they would fill it in with exhibitions between the newcomers (called Yanigans) and regulars. Manager Tris Speaker used his rookie horde sparingly in the regular season until September 21. Facing the Red Sox, the Tribe fell behind 8-1 and Speaker began inserting rookies. By the time Hamann took the mound in the ninth, second baseman Riggs Stephenson was the only nonrookie in the lineup. Hamann surrendered six runs and might have allowed a seventh had George Winn not relieved him and coaxed a double play that cleared the last of Hamann’s baserunners.8

The Indians played three rookies-vs.regulars games the next week. Hamann did not appear in any of the boxscores. He returned to New Ulm and then went back to St. Thomas College. The New Ulm Review reported that he had been offered a contract to go to spring training with Cleveland in 1923.9 Hamann choose schooling over a trip south with the Indians. Once again he was the ace of the St. Thomas staff. At St. Olaf’s he escaped a bases-loaded situation by striking out the side in the fifth and going on to victory. He handed league champ Carleton its only loss, 2-1. After two years Hamann choose to terminate his education; the reason is unclear. He eventually moved to St. Paul and took a job as a laborer. On August 28, 1928, he married Lila Marie Baumann.

The couple took up residence in Milwaukee, where Hamann found work as an enamaler. The couple had three sons, Robert (born in 1929), Thomas (1931), and David (1934). Hamann switched occupations twice, working as a pressman and later as a machinist. He and Lila parted ways10 and he married Gladys Lother on September 3, 1952. They continued to reside in the Milwaukee area.

Focused on family life, Hamann left baseball behind once he moved to Milwaukee. But he never regretted his brief stay in the majors. On his Baseball Hall of Fame questionnaire he said he would “absolutely” play professional ball again.

When the Hall of Fame undertook the task of getting questionnaires from former players, Hamann proved to be an elusive subject. His Hall of Fame file contains a number of letters giving possible leads on his whereabouts, but it was not until 1966 that he was located. By then fate had been cruel to Hamann. He was unable to fill out his questionnaire because he had frozen both hands and only had “thumb on left hand, index finger and thumb on right hand.”11

Hamann died on January 11, 1973, in the community of Bayside, on the north side of Milwaukee. He is buried in the Wisconsin Memorial Park in Brookfield, Wisconsin.

Special thanks to Eugene McGivern, sports information director at St. Thomas University, and his archivist in the college library (whose identity we unfortunately don’t have). They were able to provide details of Hamann’s two-sport, two-year career.

1 On his Hall of Fame questionnaire Hamann said that he first played for pay in Hanska, Minnesota, in 1917. This would have been semipro; Baseball-Reference lists no minor-league team ever in Hanska.

3 Accounts of the season all come from the New Ulm Review.

4 Information was supplied by St. Thomas sports information director Gene McGivern and reports in The Purple and Gray, a campus publication.

8 A complete breakdown of the game can be found at SABR’s Games Project for September 21, 1922.

10 No death certificate during the 1940s or early 1950s was found for Lila (Baumann) Hamann, leading the author to speculate that the couple divorced.