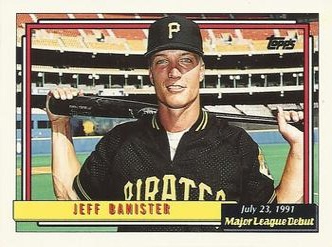 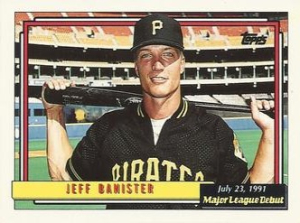 “Probably my favorite part of the day is when I get up in the morning and put my feet on the floor. Because there were a couple of different times when I was told that would never happen. My legs were the two things that I was either not going to have or were not going to work anymore, and those two things carried me down the line to first base to etch a moment in time.” — Jeff Banister1

Jeffery Todd Banister was born on January 15, 1964, to Verda and Bob Banister in Weatherford, Oklahoma. The family lived in Weatherford until 1970 when, along with older sister Carey, they moved to La Marque, Texas. La Marque is a city in Galveston County, just south of Houston, and in 1970 was a residential community for employees of nearby refineries and chemical plants. Jeff’s father, Bob, was a football coach at La Marque High School and his mother was an algebra teacher at the school. Jeff’s father was busy with his coaching schedule and Verda played a pivotal role in Jeff’s early athletic career. “She was the one that made sure I got to every Little League game, every practice,” Jeff said. And “when coaches were late, she would step in.”2

Jeff excelled at athletics and was a three-sport athlete at La Marque High School, where his father was still the football coach. He played baseball, football, and basketball, being coached by his father in football and basketball. It was at this time, in his sophomore year, that Banister noticed that his ankle was swollen. It caused enough discomfort to warrant a doctor’s visit. The doctor, family physician Dr. Lockhardt, discovered that Jeff had bone cancer and told him that if he did not get his leg amputated, he could possibly die. It was also found that day that he had cysts on the same leg, which had developed into osteomyelitis, which is an infection caused by bacteria eating away at bone marrow. Jeff and his family decided that taking the leg was the right course of action.3

Luckily for Jeff, the decision to amputate never came to pass. He persuaded the doctor to try to save the leg. Five months and seven operations later, Jeff came out of the hospital having beaten cancer and osteomyelitis.4 The year was 1981, he was 16, and his dreams of playing major-league baseball were still intact. But that was not the end of his physical complications in high school. After a comparatively uneventful junior year, Banister injured his knee during his senior year and was almost cut from the team because the injury impeded his mobility. His father suggested that he try a different position, catching. Jeff took the advice.5

After finishing high school, Banister attended Lee Community College in Baytown, Texas. He caught for the Lee baseball team and during his freshman year was once again faced with adversity. On a play at the plate in a game in which Banister was catching, the baserunner tried to hurdle him to avoid his tag. The baserunner’s knee hit Banister in the head, breaking three of his vertebrae and leaving him paralyzed for three days.6 The accident led to another lengthy stay in the hospital, nearly six months. After three operations, a year of rehabilitation, and being told that he would never play ball again, Banister was back on the field with the baseball team. He finished out another year with Lee, and was named a Junior College All-American, before earning a scholarship to the University of Houston in 1986.

Banister stayed at the University of Houston for a brief period. It was there that he met his future wife, Karen Stanton. Shortly afterward, he was drafted by the Pittsburgh Pirates in the 25th round of the 1986 draft.7 His first stop in the Pirates’ minor-league system was with the Watertown Pirates in the Class-A short-season New York-Penn League in 1986. He put up dismal offensive numbers over 41 games, batting just .145.

In 1987 Banister moved to the Macon Pirates of the Class-A South Atlantic League. Playing in 101 games, he put up a more solid line of .254/.316/.378. His improved numbers and solid defense were enough to move him up to the Double-A Harrisburg Senators for the 1988 season. His hitting stayed consistent with the Senators: .259/.296/.376. His defense suffered, though, and he wound up with 17 errors in 71 games, tied for the league lead among catchers.

For the 1989 season, Banister returned to Harrisburg and even though his batting average dropped to .238, he was named the Eastern League All-Star catcher. The 1990 season began in Harrisburg again and improved offensive numbers, .269/.313.386, were enough to get him called up to the Buffalo Bisons of the Triple-A American Association. His hot bat continued with Buffalo: a .320 average in 12 games.

Banister’s cup of coffee came in 1991. While he was with Buffalo, Pittsburgh Pirates catcher Don Slaught was injured. The Pirates called up Banister on July 23 to fill Slaught’s spot on the roster. Banister’s moment in the sun came that same day when Pirates manager Jim Leyland had him pinch-hit for pitcher Doug Drabek with one out in the seventh inning in a game against the Atlanta Braves. On the hill for the Braves was Dan Petry. Banister laced a 1-and-1 pitch from Petry in the hole between short and third. Braves shortstop Jeff Blauser managed to field the grounder and make the throw to first. But Banister beat it out.8 But neither of the next two batters could advance Banister.

After a series of roster moves, the Pirates sent Banister back to Buffalo after that one appearance. He finished the season with a .244 average in 79 games. While playing winter ball in the offseason, Banister blew out his elbow and needed surgery. He missed the entire 1992 season.9 In ’93 he joined the Carolina Mudcats of the Double-A Southern League as a player-coach. He played in only eight games and batted .333 (5-for-15). After the season, Banister retired as a player.

In the middle of the 2010 season, the Pirates fired their bench coach, Gary Varsho, and brought Banister in as the interim. After the season, Pirates manager John Russell was also fired. Banister and Clint Hurdle were interviewed for the position. Hurdle was hired; Banister retained the bench-coach position.10 Along the way Banister learned about sabermetrics from Mike Fitzgerald, a quantitative analyst who was employed by the Pirates.11

After the 2014 season, Banister interviewed for manager positions with the Houston Astros and Texas Rangers. The Astros passed, but the Rangers on October 16 signed him Banister to a three-year contract with an option for a fourth year.

In his first season with the Rangers, Banister took them from a last-place finish in 2014 to a division title in 2015. Although, they lost to the Toronto Blue Jays in the American League Division Series, Banister’s about-face with Texas earned him American League Manager of the Year Award. The Rangers again won their division in 2016, but were swept by the Blue Jays in the ALDS. The 2017 and 2018 seasons were disappointing: fourth place and then last in the AL Central Division, and Banister was fired on September 21, 2018, just shy of the season’s close.

In 2019 Banister briefly returned to the Pirates as aspecial assistant in baseball operations.12 He held the position for only one season because the Pirates were in the midst of a restructuring that did not include Banister and 14 others. Banister interviewed with the Houston Astros after A.J. Hinch was fired, but lost out to Dusty Baker.13 On September 2, 2020, the University of Southern Colorado announced that Banister would become its director of player development.

1 Anthony Castovince, “They Had 1 Career AB, 1 Career Hit. Nothing Else,” MLB.com, August 29, 2019. mlb.com/news/featured/mlb-ultimate-one-hit-wonders.

2 Stefan Stevenson, “Banister’s Mom Played as Vital a Role in Athletics as Coaching Dad,” Fort Worth Star-Telegram, May 13, 2017.