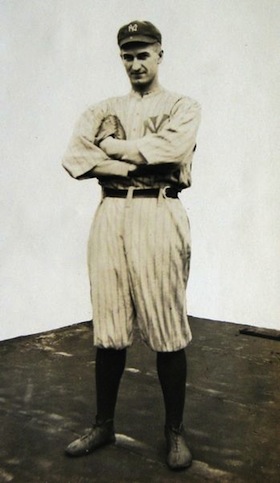 Pi Schwert has the distinction of being one of a small handful of former major-league players to serve in the United States House of Representatives.1 An excellent defensive catcher for the University of Pennsylvania, he went straight to the New York Yankees after graduating in 1914, playing in 12 games over two seasons.

Years later, as a prominent banker in the Buffalo, New York, area, he was elected to the House to serve the 42nd District, in Western New York. He served for only a little over two years before tragically dying in office.

In between baseball and politics, Schwert was a local businessman, first as an owner of a general store, then in banking. He was also very involved in numerous civic organizations and was a well-known and popular figure throughout the Buffalo area.

Pius Louis Schwert was born on November 22, 1892, in Angola, New York, a town about 20 miles south of Buffalo along Lake Erie. He was the only child born to Julius and Louisa (Ahlers) Schwert. His grandfather, Pius Quinton Schwert, was a German immigrant who became a saloon keeper, then a hotelier.2 Julius followed in his father’s entrepreneurial footsteps, moving to Angola in 1891 and opening a grocery store. He later started a bank and a real-estate business that sold lakeshore properties. He also served in public office as an Angola town supervisor from 1900 to 1913, then again from 1918 until his death in 1924.3

Pi attended Angola High School until 1909, when he transferred to Lafayette High School in Buffalo.4 At both high schools, he played catcher on the baseball team.5 On the weekends, he played for the Angola semipro team.6 After graduating from Lafayette in 1910, he attended the University of Pennsylvania’s Wharton School. He played for the freshmen team in 1911, then was a member of the varsity for his next three years. 7

At Penn, Schwert was very active in a number of organizations. He was president of the Wharton Association and a member of the Sigma Pi Epsilon fraternity, the Scalp & Blade Society (a national society made up of college men from Buffalo), and the Christian Association.8 He graduated in 1914 with a B.S. in economics.

He was also elected captain of the baseball team in his senior year.9 While the Quakers didn’t have a great season, going 14-17, Schwert’s defensive abilities led to his being named to the 1914 national “All-Consensus” team – the equivalent of an All-American team.10

Shortly after being honored, Schwert drew the interest of the Pittsburgh Pirates and Cincinnati Reds.11 Also, both Buffalo baseball teams, one from the International League, the other from the “outlaw” Federal League, expressed interest in their hometown hero.12

But interest seemed to wane when the final intercollegiate batting averages were released. Schwert batted .183 in 26 games. Only four other players who had played in more than 20 games had batted worse.13

One team, however, remained unperturbed. The New York Yankees, who were unhappy with their current crop of catchers, were still interested in Schwert. Penn baseball coach  RoyThomas, a former longtime player for the Philadelphia Phillies, helped advise Schwert.14 No doubt he helped persuade Yankees manager Frank Chance to take a look at Schwert.

On July 7, on an off-day after a five-game series with the Philadelphia Athletics, Chance signed Schwert to a contract and had him report immediately to the Yankees.15 However, it was over five weeks before he played in his first major-league game; on August 20 he replaced catcher Les Nunamaker. He went hitless in his only at bat.

It would be another month and a half before Schwert got into his next game. In the second-to-last game of the year, he started against the Philadelphia Athletics. The Athletics tested the rookie by attempting four steals. Schwert threw out all four in helping the Yankees to a 2-1 win. The Philadelphia Inquirer noted that “his work around that home plate [was] the bright particular spot of the whole fuss.”16

Schwert’s defense earned him a start in the last game of the season. In all, he caught five players stealing in his three games.17 But in eight plate appearances, he had no hits with two walks.

Despite his poor hitting, Schwert in the offseason was the subject of rumors about jumping to the Federal League. It was even reported that he signed with the Brooklyn Feds.18

Schwert himself claimed that he was a free agent because of an oversight on the part of the Yankees.19 The Cincinnati Reds expressed interest in Schwert. Reds manager Buck Herzog had just signed Schwert’s former Penn roommate and batterymate, pitcher Frank E. “Shorty” Sayre, and was hot after Schwert.20

But new Yankees manager Wild Bill Donovan nipped the pursuit in the bud. He talked Schwert into coming back with the Yankees for the 1915 season. “Friends of mine in Philadelphia who saw the collegian in American League games declare that he showed great promise,” said Donovan.21 On February 9 he signed with the Yankees.

In Savannah, Georgia, for spring training, Schwert found himself in a competition with Jeff Sweeney and Les Nunamaker.22 All three catchers went north with the club but Schwert again found himself on the bench. Two months into the season, on June 11, he finally made it into a game as a pinch-hitter. He collected his first major-league hit 10 days later off Bob Shawkey in a 12-7 loss to the Philadelphia Athletics.

In all, Schwert saw action in four games before the Yankees sent him and Gene Layden down to Jersey City of the Double-A International League on August 7.23 Despite batting .214 in 31 games with the Skeeters, Schwert was called back to the Yankees after Jersey City’s season. He played in five more games, starting in four of them. On October 7 he was the starting catcher in the last game of the season. It was his last major-league game.

At the Yankees’ spring-training camp in Macon, Georgia, in 1916, Schwert found himself in a four-way competition for catcher with Nunamaker, Roxy Walters, and Walt Alexander.24 Donovan kept three catchers – Schwert was the odd man out. On March 25 he was farmed to Newark of the International League.25

Playing the whole season with Newark, Schwert batted .232 in 84 games. In February 1917 Newark released Schwert to Mobile of the Class A Southern Association.26 With his baseball career moving in the wrong direction, Schwert refused to report to Mobile and retired from baseball.27 He opened a general store in the Buffalo area and decided to spend full time with the venture.28

But World War I pulled Schwert back into baseball. In 1918 he enlisted in the US Navy and was stationed at League Island Navy Yard in Philadelphia. There he played for the powerful 4th Naval District baseball team. Managed by former major leaguer Harry Davis, the team featured many major- and minor-league players, including the Cincinnati Reds’ Morrie Rath, the Philadelphia Athletics’ Jing Johnson, and Bob Shawkey, who was now playing for the Yankees. Eddie Collins even played with the team for a game. The team drew huge crowds to its Sunday games. It was so good that it went 2-1 against major-league teams, beating the Athletics and Reds while losing to the Phillies.

After the baseball season, Schwert was promoted to ensign while serving in the Navy even after the war had ended. What occurred towards the end of his service is unclear. On March 30, 1919, the Kansas City Star reported that Schwert was in Yankees camp in Jacksonville, Florida, but on April 1 the Columbus (Georgia) Enquirer reported that he was actually on the USS Meade in Savannah.29

Whatever the situation, Schwert ended up back in Angola playing for the Angola semipro team as he had done every summer since high school. But in the following year, 1920, Schwert was back in Organized Baseball. The Buffalo Bisons International League found itself in a bind when all three of its catchers were injured late in the season. Schwert was asked to step in and “played phenomenal ball.” In 14 games, he batted .496.30

He signed with Buffalo for the 1921 season with the agreement that he play only in Bisons home games.31 The Towanda News wrote that Schwert “is a most welcome addition to the club not only for his rare baseball playing ability but also a remarkable personality, which makes harmony on a ball club.”32 He played in 29 games for Buffalo, batting .262.

Schwert made big changes in 1922. On February 12 he married Hattie Schwert, a distant cousin and an elementary-school teacher from South Buffalo.34 At the same time, he decided to sell his general store and go back to playing baseball full time with Buffalo.35

However, a series of miscommunications led Buffalo to release Schwert in April.36 He had promised to report to camp by late March but was unable to sell his store until April. He then stayed in the Buffalo area helping the new buyer with his purchase. In a letter to the Buffalo Courier, Schwert wrote that he had no idea where to report in April and was caught off guard when he was released.37 His career in Organized Baseball finally came to an end.

Instead of baseball, Schwert went to work at the Bank of Angola as a clerk/cashier.38 He eventually worked his way up to bank president.

Schwert continued to play semipro baseball, mostly with Angola. In 1928 he celebrated his 20th season playing for Angola.39 In 1929 he was named president of the Western New York semipro baseball league.

Immensely popular not only as an athlete but as a business person, in 1933 Schwert was elected county clerk for Erie County, New York as a Democrat. He held that position until 1938. That year, longtime US House of Representatives member James M. Mead was nominated to run for the New York US Senate seat left vacant by the death of Royal S. Copeland.40

Schwert was nominated by the Eric County Democratic Committee to run for Mead’s open seat. He was elected to the seat and took office on January 3, 1939. He won a regular election for the seat in 1940. During that year, he also survived a health scare when he had a heart attack while working out at the Capitol gymnasium.41

But just a couple of months after his re-election, on March 11, 1941, Schwert was attending a gathering of western New York government officials and legislators at the Annapolis Hotel in Washington when, after a brief speech, he suffered a massive heart attack. He died in the arms of his friend, Senator James Meade.42 Schwert was just 48 years old. He was survived by his wife, Hattie. The couple had no children.43

The next day, the House adjourned for the day after a brief memorial session for Schwert. Three days later, an “overflow crowd” came to First Congregational Church of Angola to pay their last respects to Schwert.44 He was buried in Angola’s Forest Avenue Cemetery.

1 As of the 2012 general election, there were four former major leaguers who had gone on to serve in the US House. Besides Schwert, the others are John Tener, Vinegar Bend Mizell, and Jim Bunning. US House of Representatives website: history.house.gov/Exhibitions-and-Publications/Baseball-Game/Statistics/.

8 Ibid. Schwert, as a member of the Christian Association, attended a speech by Billy Sunday at Penn that “led [Schwert] into active Christian work.” In a book about Sunday written in 1917, author William Thomas Ellis called March 30, 1914, the day Sunday talked at Penn, “the greatest day of [Sunday’s] crowded life.” Philadelphia Inquirer, January 25, 1915; William Thomas Ellis and Billy Sunday, Billy Sunday, the Man and His Message (Philadelphia: J.C. Winston Co., 1917), 343.

17 Baltimore Sun, January 24, 1915. Baseball-Reference has him throwing out only five players.