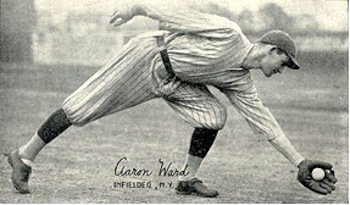 With Aaron Ward at second base, the New York Yankees won three consecutive American League pennants from 1921 to 1923. He was a capable hitter, but he drew comparisons with Nap Lajoie, Eddie Collins, and Frankie Frisch for his splendid fielding. “Next to Babe Ruth,” Ward “is the most valuable man” on our team, said Yankees shortstop Everett Scott in 1923.1

Aaron attended Ouachita Baptist College in Arkadelphia, Arkansas. He played shortstop on the college baseball team and was quarterback of the football team.4 He stood 5-feet-10 and weighed 160 pounds, and he batted and threw right-handed.

Ward played for the Little Rock Travelers, the Montgomery (Alabama) Rebels, and the Charleston (South Carolina) Sea Gulls before joining the Yankees in 1917. Scout Bob Gilks recommended him to the Yankees.5 In his major-league debut, on August 14, 1917, the 20-year-old Ward replaced an injured Roger Peckinpaugh at shortstop in the Yankees’ 10-1 loss to Walter Johnson and the Washington Senators.6 Ward singled late in the game for his first major-league hit, “but suspected that Johnson grooved one for his particular benefit.”7 As a utilityman for the Yankees from 1917 to 1919, Ward played sparingly and batted .152. The Washington Times said he “is a fair enough fielder, but lamentably weak with the stick.”8 Ward was stationed at Camp Pike, Arkansas, while serving in the Army from August to November 1918 during World War I.9

In 1920 the Yankees welcomed the indomitable Babe Ruth to the team, but lost third baseman Frank “Home Run” Baker, who sat out the season to care for his children after his wife’s death.10 This opened a spot in the lineup for Ward, who filled in impressively, playing 114 games at third base and recording the second highest fielding percentage (.965) among AL third basemen. Sportswriters raved about his defense:

On offense, Ward was no Punch-and-Judy hitter. William B. Hanna of the New York Sun and Herald said: “Aaron Ward of the Yankees hits a ball as hard as any young player in many a day. He is a swinger from the end of his bat, and he belts them far and swiftly.”13 On August 29, 1920, Ward knocked in the winning run against the St. Louis Browns in New York:

“After having been a doddering whiff artist with the wand on three previous occasions at the plate, Aaron suddenly ... leaped upon a slow one which [Urban] Shocker tried to sell him. He gave it a high and mighty Dempsey of a wallop against the right concrete [wall] for an emphatic double while thirty-five thousand let up a howl of joy big as a clap of thunder.”14

A free-swinger, Ward batted .256 in 1920 and led the league in strikeouts with 84. His 11 home runs tied Wally Pipp and Bob Meusel for second most on the team, behind Ruth’s 54.

In November 1920 Ward married Inez Blakely in Arkansas. The young couple had two daughters, Alice and Mary, before divorcing.15 Ward also had a son Gene, born in 1926.16

When Home Run Baker returned to the Yankees in 1921, manager Miller Huggins moved Ward to second base. It was a smooth transition, as Ward became one of the best-fielding second basemen in the league. On August 8, 1921, he made “a stupefying stop” of a hard-hit ball, hurling “himself on the sphere like a hawk on a chicken.”17 Ward possessed a “born knack of sensing how and when to head off torrid grasscutters.”18 Although he “still strikes out often,”19 he batted .306 in 1921.

After winning their first pennant, the Yankees faced the New York Giants in the 1921 World Series. Ward played all eight games of the Series, which was won by the Giants, 5 games to 3. Through the first six games, Ward was a fielding star, with only one error in 47 chances at second base; however, he was criticized for misplaying two balls in Game Seven, which contributed to a 2-1 Giants victory.20 In 1922 the Yankees again won the pennant and lost to the Giants in the World Series. Ward managed only two hits in the Series but both were home runs.

On Opening Day 1923, Ward became the first Yankee to get a hit in the new Yankee Stadium.21 He led major-league second basemen in fielding percentage in 1923, and nearly set a record for second basemen: his .97996 percentage was barely shy of George Cutshaw’s .98003 rate in 1919. Yankees shortstop Everett Scott said, “Ward has made more spectacular plays this year than any player in the league, and they went unnoticed owing to the grace with which he executed them.”22

Ward was solid on offense in 1923, batting .284 and ranking second to Babe Ruth on the team in triples and home runs. George Trevor of the Brooklyn Daily Eagle said: “It is astonishing what power Wardie packs in his none too generous frame. He isn’t a big man but few heavier men can crown a ball as hard.”23

After winning the pennant for the third year in a row, the Yankees at last defeated the Giants in the World Series. Ward batted .417 in the Series and led the team with 10 hits, and he handled all 38 of his fielding chances without error. “He is a real ball player, one of the best in either league,” said manager Huggins.24

Ward was quiet and intelligent. From the infield, he astutely studied the game. For example, he knew when George Sisler was planning to steal second base, because Sisler “would prance around off first and keep pulling up his pants.”25 Ward’s observations and signals helped the Yankees’ catchers. In 1940 catcher Benny Bengough said: “Wardy and I had a dozen different signs in 1925. He could get the opponents’ hit-and-run sign quicker than anyone I ever knew. The result was that I caught more men off the bags, and threw out more men stealing, than any catcher will even attempt to get nowadays.”26

After peaking in 1923, Ward suffered several injuries, struggled with his hitting, and was eventually supplanted by Tony Lazzeri in 1926 as the Yankees’ second baseman. Ward played a full season for the Chicago White Sox in 1927, but his major-league career ended in 1928 after he appeared in six games as a member of the Cleveland Indians.

For the next five seasons, Ward was a minor-league itinerant, playing for Toledo, Little Rock, Sacramento, Oakland, Shreveport/Tyler, and Kansas City. Among his managers were Casey Stengel, George Sisler, and Tris Speaker – men who had played against Ward and respected him, and were willing to give him another chance. In the offseason Ward was the reading clerk of the Arkansas State Senate.27

In the mid-1930s Ward worked for the Danciger Oil and Gas Refinery in the Texas panhandle and played for the Danciger Roadrunners.28 In 1946 he managed the New Iberia (Louisiana) Cardinals in the Class D Evangeline League, and in the 1950s he and his son Gene ran a tire retreading business in New Orleans.29 Ward died on January 30, 1961, in New Orleans, at the age of 64.