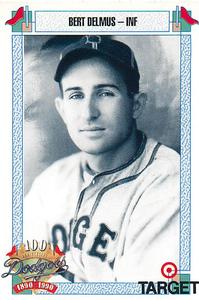 In 1933, Bert Delmas experienced a meteoric rise through the baseball world as he moved from Stanford University’s Sunken Diamond to the Piedmont League and finally Ebbets Field, all in just a few short months. His time at baseball’s highest level was nearly as brief as his ascension was quick. Two years later, the middle infielder was out of pro ball entirely.

Albert “Bert” Charles Delmas was born on May 20, 1911, in San Francisco. His parents were Albert Russell “Del” and Mabel (née Ames) Delmas. Del was a shortstop who enjoyed a solid 13-year career (1902-1914) in the minors, including two championships in five years with the Pacific Coast League’s Los Angeles Angels.

Bert’s first baseball guru was in all likelihood his father. However, he first came to baseball prominence under the tutelage of former major-leaguer Harry Wolter while at Stanford University. Delmas starred at shortstop and captained the 1930 Stanford frosh nine.

He moved up to the varsity in 1931, hitting .403 as the Indians took home the California Intercollegiate Baseball Association championship.1 A highlight of the season was Delmas’s 4-for-5 effort in a 12-6 win at UCLA on March 27. Delmas had two singles, a double, and a home run.2 The team also featured infielder Mac Cutshaw, son of big-league veteran second baseman George Cutshaw.3 Stanford finished the season with a 15-3 record against the likes of USC and UCLA, as well as Bay Area rivals Cal, St. Mary’s, Santa Clara, and the USF Dons.4 One of the few errors Delmas committed in 1931 came during the offseason, when he was arrested and fined $25 for shooting inside the confines of the Fresno County’s Huntington Lake Game Refuge in September.5

Delmas battled injuries in 1932 but returned to action late in the collegiate season. In 1933, Stanford dropped to 4-5 in conference play. The Great Depression had an effect on college baseball in the Bay Area – UCLA, Santa Clara, and USF had dropped out of the association. While known as a defensive star, in that short season Delmas hit .525, collecting at least four base hits in three games. Against the St. Mary’s Gaels, he went 5-for-5 (all singles) in a 19-0 Stanford win.6

With fewer collegiate games on the slate, Stanford also took on the rookie squad of the PCL’s Mission Reds and local semipro squads such as the Keneally Seals. Delmas collected two triples against the Seals in an early February contest.7

Delmas was also an excellent student and member of a men’s campus honor society known as the Skull and Snakes. He graduated in the spring of 1933 with a degree in economics, and his on-field exploits led to offers from the Athletics, Red Sox, Cubs, Reds, and several PCL clubs.8 Ultimately, it was Brooklyn Dodgers scout Chick Fraser who got the cautious Delmas to accept a tryout.9 It went well, and Delmas was signed by Brooklyn and sent to the Richmond Colts in the Piedmont League in July.

Delmas joined the Colts on the road and was inserted into the lineup at second base, going 0-for-5 in a doubleheader at Charlotte. Delmas found success the next day, going 3-for-5, including a double. He added a stolen base in an 11-1 win over the Durham Bulls.

On August 18, Delmas showed off his speed, producing two bunt singles and scoring twice in a 3-for-3 effort during a 5-1 win over the Winston-Salem Twins.10 The next night his defensive skills were on display as he started two of his team’s four double plays in another win over Winston-Salem.11

Delmas would never hit a professional home run, but he did come close to an inside-the-park job on August 24 against Durham. With a runner on base, Delmas walloped a ball to deep left-center. As he sprinted around the bases, the ball rolled under the fence. Delmas came home, but the hit was ruled a ground-rule double.12

The Dodgers were tracking Delmas’s efforts in Virginia’s capital city. Manager Max Carey wanted to call the prospect up for a doubleheader against the Cubs but rethought when he learned that the Colts had a chance at the Piedmont League pennant. At the time, the Dodgers were having issues in the infield owing to injuries suffered by Tony Cuccinello and several others. They used Hack Wilson and catcher Al Lopez at second base during this period.13

Delmas led the Colts to a 10-1 win over Winston-Salem to end the month of August. He was 3-for-4 with a sacrifice, double (the game’s only extra base hit) and run batted in.14 Three days later, the Twins again fell victim to Delmas’s hitting prowess. He went 4-for-7 with two runs scored as the two teams split a doubleheader.15

On September 7, newspapers reported that Delmas was being called up to Brooklyn.16 Three days later, the 5-foot-11, 165-pounder made his big-league debut against Pittsburgh. In the eighth inning of the first game of a doubleheader, the left-handed batting Delmas came into the game as a pinch-hitter for pitcher Walter Beck. Bill Swift struck him out, and the 17,000 fans in attendance groaned and booed, knowing Hack Wilson was still on the Dodger bench.17

Delmas wouldn’t see action again until September 16, when he came on as a pinch-runner for Glenn Wright in the ninth inning of the second game of the day against the Cardinals. He ended up scoring a run in a 14-13 loss.

His first action as a fielder took place when he entered the game at Chicago on September 19. He replaced Jake Flowers and went 0-for-1 at the plate. On September 24, he got his first major-league start in the second game of a doubleheader at Ebbets Field against Philadelphia. He also collected his first hit, a line drive single in the bottom of the first to center off of Phil Collins. The following day, Delmas got another start as the Dodgers leadoff batter. He went 2-for-5, scoring two runs in a 7-2 win over the Phillies. He also committed an error.

On October 1, Delmas was again at the top of the order in his final big-league appearance, going 0-for-4 and scoring a run in a 5-2 season-ending win over the Giants. Brooklyn ended its season with a dismal 65-88-4 record. The next day, Carey was singing Delmas’s praises. “Delmas is as good as the scouts claimed he was. He’s fast on his feet, possesses a deadly arm, and he can hit that apple,” Carey told the Brooklyn Citizen.18 The praise was somewhat overdone. In 12 games for the Dodgers, Delmas was 7-for-28 at the plate, and all his hits were singles. He collected one walk and struck out seven times. In 55.1 innings in the field, he recorded a .912 fielding percentage while committing three errors.

Unfortunately for Delmas, Carey would not be the Dodgers’ skipper in 1934. Though he signed a contract to return, the news did not go over well with the Brooklyn faithful. The team’s business manager, Bob Quinn, was also unhappy that Carey had failed to respond to Bill Terry’s quip ahead of the 1934 season: “Is Brooklyn still in the league?”19 The uproar about Carey would lead to the hiring of Casey Stengel as skipper.

In the spring of 1934, Stengel released Delmas, and the second baseman was sent to Seattle.20 Seattle sent him back, complaining that they had too many infielders.21 Delmas continued to see action during spring training but was released on April 3 and optioned to the Montreal Royals.22

Delmas played second base and shortstop for both the Montreal Royals and Albany Senators in 1934. In a combined 124 games, he hit .279. During his time with Albany, the Stanford Daily noted that Delmas was hitting .330 and playing nearly error-free ball in the field.23

In the spring of 1935, the Dodgers optioned Delmas to Buffalo. He played for the Bisons through June before moving to the Albany Senators (a Washington Senators farm club) in July. He finished the year with the Toronto Maple Leafs (a Cincinnati Reds affiliate). In a total of 64 games with the three clubs, he hit .262 in 168 at-bats. During Delmas’s three minor-league seasons, he hit .287 in 242 games.

In 1936, the Dodgers were out of options with Delmas, and he was sold to Allentown.24 Instead of playing another year of minor-league ball, he decided to retire and put his Stanford degree to work in the insurance business. This career lasted 47 years. Successes in the field led Delmas to become the part owner of the Benedict, Delmas, and Tatsch Insurance firm.

Delmas died of heart disease in Huntington Beach, California in 1979, at the age of 68. He was survived by his wife Marcella (née Schnieders), whom he married on September 14, 1940. They had three daughters: Ann, Catherine, and Marilyn.25 Bert Delmas rests at Pacific View Memorial Park in Newport Beach, California.

This biography was reviewed by Eric Vickrey and Rory Costello and checked for accuracy by SABR’s fact-checking team.

In preparing this biography, the author relied primarily on newspaper articles found at newspapers.com and at the Stanford Daily online archives.

The Baseball Necrology by Bill Lee provided information about Delmas’s time in the insurance business and cause of death.

Unless otherwise noted, statistics have been taken from Baseball-Reference.com.