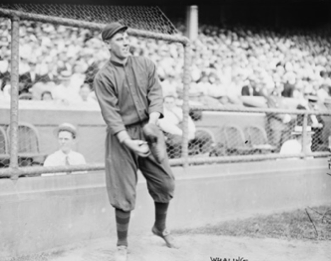 Bert Whaling, a slick-fielding catcher, began the 1914 season as the Boston Braves’ number one catcher, but lost the job to Hank Gowdy because of his weak hitting. Relegated to second-string status, Whaling still led the league in throwing out would-be base stealers.

Albert James Whaling was born in Los Angeles on June 22, 1888, the youngest of nine children born to Canadian immigrants Charles and Catherine (McCarthy) Whaling. Charles worked variously as a farmer, laborer, night watchman, and as a Los Angeles city policeman and special officer.

As a teenager, young Whaling starred on the Los Angeles area sandlots. He started his professional career with Portland of the Pacific Coast League in 1908. The 20-year-old catcher hit only .145 in 71 games for the Beavers and was unable to stick with the club. He started the 1909 season with the Salt Lake Mormons of the Inter-Mountain League. In mid-July the team relocated to Livingston, Montana, but the league soon disbanded, and hitting and fielding statistics are not available. After the demise of the Inter-Mountain League Whaling caught on with the Seattle Turks of Class B Northwestern League and played in 11 games, again hitting well below the Mendoza line at .158. At the end of the season he returned to Los Angeles and played for the Maier’s club in the semipro California Winter League, where one of his teammates was his brother Bob, the first baseman. Bob and Bert were teammates at least once more in the winter league, playing for Vernon in 1911. Altogether Bert played in that circuit in at least seven seasons between 1908 and 1925.

Whaling apparently was out of Organized Baseball in 1910 and the early part of 1911, but he played somewhere in Montana, probably for semipro teams in Hamilton and Anaconda or Butte. A dispatch from Hamilton to the Anaconda Standard dated August 12, 1911, stated: “Mr. and Mrs. Bert Whaling left here Saturday morning for Seattle where Mr. Whaling will play with the Seattle club in the Northwestern League.”1 On March 31, 1912, the same newspaper carried an article about Bob Whaling reporting to the Butte club: “Whaling, the first base aspirant, is a brother of Bert Whaling, who played with the Hamilton club last year, later getting to go to the Cleveland Americans via Seattle. If he can live up to the name with club as the catching gentleman used to do, he will be good news to many a game.”2

Whaling did not get into any games with Cleveland, and was sent to Seattle, where he appeared in 29 games and hit .265 toward the end of the 1911 season. In March 1912 he went to the Naps’ training camp in Mobile, but was released in April. He returned to Seattle and started the season as the regular catcher for the Giants, as the former Turks were now called. He played in 138 games, the most he ever played in one season, and hit a respectable .264. On June 24, 1912, Whaling’s contract was purchased by the Boston Braves, but he finished the season with Seattle.

Whaling made his major-league debut on April 22, 1913, as the Braves were losing a home game to the Brooklyn Dodgers, 5-3. During the game he relieved starting catcher Bill Rariden and went hitless in one time at bat against Cliff Curtis. Whaling was used sparingly early in the season and did not collect his first hit until May 1, when he singled off Eddie Stack in a 4-2 loss at Brooklyn. For the remainder of the season he split catching duties with Rariden. Whaling appeared in 79 games, 77 of them as catcher, fielded .990, and became the first rookie catcher in major-league history to lead his league in fielding percentage. At 6 feet and 185 pounds, the 25-year-old backstop was rather stockily built and slow afoot, but he excelled at throwing out baserunners with his strong right arm.

In 1914 Whaling inherited the starting role because Rariden had jumped to the Federal League. However, he failed to hit well enough to keep the job, and Hank Gowdy, back up from the Buffalo Bisons of the International League, was promoted to the starting position. Whaling hit only .209 in 60 games as the second-string catcher. Despite leading the league in throwing out would-be base stealers, he spent more and more time on the bench as the season progressed. Unfortunately for him, he never got into a single game in the World Series as the Miracle Braves swept the Philadelphia Athletics.

Although Whaling’s size would be barely average, if that, among modern players, he was hefty enough to earn the nickname Moose during his playing career. Among all the position players on the Braves 1914 roster, only Clarence “Big Boy” Kraft, who appeared in a mere three games in his entire major-league career, and burly first baseman Butch Schmidt packed more weight than Whaling. His powerful build earned him some notoriety in 1914, as evidenced by this account by Tom Meany: “Rabbit Maranville, the midget with the arms and shoulders of a weight-lifter, flattened Heinie Zimmerman during a ruckus with the Cubs but for years afterward der Zim refused to believe that the Rab had cooled him off. He always insisted that the coup de grace had been administered by one of the larger Braves, Butch Schmidt or Moose Whaling, a reserve catcher. He just couldn’t see himself kayoed by the little tyke.”3

In 1915 Whaling was again the backup to Gowdy, playing in 72 games. He made his final major-league appearance on October 7, going 1-for-3 in a 15-8 loss to the New York Giants on the last day of the season. During his three years in the majors Whaling had played in 211 games, hitting for an average of .225, with an on-base percentage of .283 and a .276 slugging average. He hit no home runs. He partly compensated for his deficiencies at the plate by twice leading the league in a fielding category, but fielding prowess was not enough to keep him in the majors. A week after his final big-league game, Whaling was traded, along with outfielder Herbie Moran, to the Vernon Tigers of the Pacific Coast League for outfielder Joe Wilhoit. Not wanting to return to the minors, Whaling considered joining the Federal League, before reluctantly agreeing to play for the Tigers. That was a wise decision, as the Federal League went out of business before the start of the 1916 season.

In December 1915 a bizarre incident almost cost Whaling his life. He had gone with some friends to China Rock, just south of Redondo Beach, and he’d tried to pry an abalone off the rocks with his bare hands. When the waves receded, he found his hand had been stuck and held fast, pinned to the rock. The others were out of hearing, but finally found him. A newspaper account said, “Whaling had to be resuscitated with stimulants, as the waves had beaten him until his strength was gone.”4

Whaling hit only .200 for Vernon in 70 games in 1916, and dropped out of Organized Baseball for three years. When he registered for the draft in Bisbee, Arizona, on June 5, 1917, after the US entered the World War, he reported his occupation as copper miner for the Phelps Dodge Corporation. (He may not have actually done much mining, but probably was on the company’s payroll so he could play for its semipro baseball club.) He joined the Navy, attaining the rating of steamfitter second-class. In August 1918 a Service League was formed in the Los Angeles area, and Whaling was appointed manager of the Submarine Base club. After his return to civilian life, he traveled around the minor leagues, playing for six teams in seven years in such places as Regina, Beaumont, Edmonton, Denver, Des Moines, and Salt Lake City.

In 1926 Whaling started the season as a catcher and acting manager of the Salt Lake City club of the Utah-Idaho League. He was expected to manage only until Billy Orr could get his root-beer business in Peoria straightened out, but the manager decided he could not leave Illinois and resigned on May 20. Salt Lake owner George O. Relft removed the term “acting” from Whaling’s title. The Bees did not fare well under Whaling’s leadership, and he was replaced as manager of the last place club in midseason by Chet Chadbourne. Whaling could have continued as a catcher, but chose to end his playing career in an encounter with Ogden on July 2, 1926. At the age of 38, he made his final game as a player in Organized Baseball a memorable one, collecting three hits and throwing out the only two men who attempted to steal second base. In the 37 games he played for Salt Lake City in 1926, Whaling hit .333, the only time in his professional career that he topped the .300 mark. Previously his highest batting average had been .272, attained in 1923 in the Western League with Denver and Des Moines.

Whaling was more successful in his other managerial experience, as he piloted the Phoenix Senators to the Arizona State League pennant in 1928. The contrast between conditions under which the Senators played and the conditions enjoyed by the present- day Arizona Diamondbacks is striking. The Senators played in Riverside Park, which had a wood frame grandstand and an infield of gravel and sand. Ticket prices were usually 25 cents for general admission and 50 cents for box seats. On Fridays women were admitted free. All games were played during the day, of course, under the blazing Arizona sun, with temperatures frequently soaring well over 100 degrees. Pitchers sometimes changed their flannel uniforms after every inning, hanging one jersey up to dry while wearing another. Travel to road games was by automobile over Arizona’s main roads, which were graded and oiled. Baseball gear was strapped to the sides of the cars.

When his baseball career was over, Whaling and his wife, Pansy, returned to the Los Angeles area. Their last known address was in Burbank. They had no children. For some time Bert worked in the motion-picture industry as a sound man. Albert James Whaling died at the Sawtelle Veterans Hospital in Los Angeles County on January 21, 1965, at the age of 76. The cause of death was listed as metastatic adenocarcinoma. He was buried in the Los Angeles National Cemetery.

4 Los Angeles Times, December 10, 1915. China Rock had been named after two Chinese men who lost their lives while pinned to the rocks by abalones.