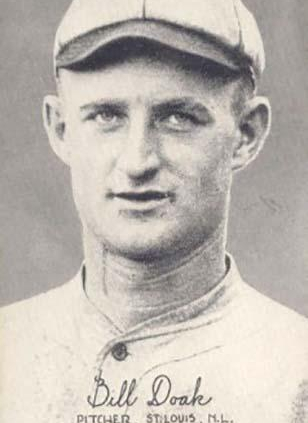 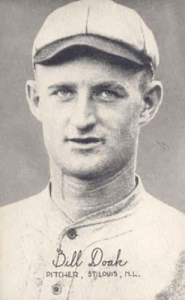 Spittin’ Bill Doak still ranks second in career shutouts for the St. Louis Cardinals, behind only Bob Gibson. In 1914, his first full season in the majors, Doak came out of nowhere to lead the National League in ERA as the Cardinals achieved third place, their best NL finish ever. He followed with solid but unspectacular seasons for the Redbirds for the rest of the Deadball Era, earning 87 of his 169 career wins before 1920. A slow and deliberate worker who used a huge red handkerchief to wipe his brow a few times each game, Doak relied on good control and an effective “slow drop” (curveball) to go along with his signature spitball. Today Bill Doak is best known for his namesake glove, an innovative design that remained in the Rawlings line for more than three decades.

William Leopold Doak was born in Pittsburgh on January 28, 1891. He was modest, unassuming, and “so silent as to be almost an enigma,” according to Baseball Magazine. In later years The Sporting News called Doak “the only strictly moral man on the Cards,” noting that he taught a Sunday school class before going to the ballpark. His father, a civil engineer, wanted him to become a mining engineer, but Bill had other ideas. He spent his first two years in professional baseball, 1910-11, with Wheeling of the Iron and Oil League, averaging almost 300 innings a year with an ERA around 2.00. Late in the 1912 season Doak got a brief tryout with the Cincinnati Reds. After seeing Bill pitch for only two innings, Reds manager Hank O’Day wasn’t impressed and farmed him out to Akron.

The next summer the Cardinals purchased Doak for $500 on the advice of scout Eddie Herr. The blonde six-footer was frail looking and put so much effort into each pitch that rookie manager Miller Huggins suggested he take up the spitball, which required less exertion. Bill followed Huggins’ advice and turned himself almost overnight into one of the NL’s top pitchers, posting an ERA a full run below the league average in 1914. His 19 victories that season included seven shutouts and two wins over Christy Mathewson, one over Grover Cleveland Alexander, and a big win over the Pirates at Forbes Field on Doak Day before hometown family and friends. Baseball Magazine was so impressed that it dubbed him a prodigy.

But neither Doak nor the Cardinals built on the promise they showed in 1914. The team didn’t contend for the pennant the rest of the decade, a period during which Doak had only one more winning season. Bill nonetheless enjoyed many glorious moments. In 1917 he pitched two complete-game victories over the Brooklyn Robins on one day, winning 2-0 and 12-4. Twice he pitched one-hitters against the Phillies, both times losing the no-hitter because he failed to cover first base quickly enough on an infield grounder. “Lumbago Bill,” as he was called, was hampered by back problems from early in his career, which might explain why he was so slow in leaving the mound.

Bill Doak took two actions off the field in 1919 that changed his life considerably. First he approached the Rawlings Sporting Goods Company of St. Louis, where he played, about improving the design of the baseball glove, which to that point was meant mainly for hand protection, not functional fielding. Working with Rawlings production chief William P. Whitely, Doak came up with a revolutionary new design that became a prototype of gloves for years to come. Bill explained what made it special: “By enlarging the thumb, bringing it up even with the first finger, a larger pocket is formed and many balls are caught on the very tips of the thumb and first finger.” Rawlings first sold the model for $10 as the “Premier Players’ Glove” in 1920.

After the 1919 season Doak also played an active role in the successful campaign to grandfather pitchers like himself who already used the spitball from the new ban against “freak” pitches. Initially spitballers were to receive only one transition year, 1920, to use their wet delivery, but the owners reversed their stance and allowed Doak and 16 others to use the pitch for the remainder of their careers.

In 1920-21 Doak had a combined 35-18 record and led the NL in ERA in 1921, once again a full run below the league average. After the Cardinals traded him to Brooklyn in June 1924, he helped the Robins make a tremendous but ultimately unsuccessful pennant drive, reeling off 10 consecutive wins in August and September while giving up nineteen earned runs in those games. On September 6, 1924, he pitched his second two-hit shutout in four days, giving the Robins their 15th straight win and putting them in first place, if only for a few hours. Bill later claimed that it was his greatest thrill as a ballplayer. After spending 1925 and 1926 out of baseball, selling real estate during the Florida land boom, Doak came out of retirement and went 11-8 for the 1927 Robins. He ended his playing career back with the Cardinals in 1929.

Bill retired to Bradenton, Florida, where he owned a candy store called Bill Doak’s Sweet Shop. He was active in amateur baseball, coaching Bradenton High School to the state championship. He also coached and sponsored boys club, midget, and American Legion teams. Doak was a golf professional, and his son Bobby won the Florida Amateur Championship. The Bill Doak model glove, which had a profound impact on fielding, was a best seller for years, earning Bill as much as $25,000 in royalties in a year. It was still in the Rawlings line when Bill died in Bradenton on November 26, 1954.