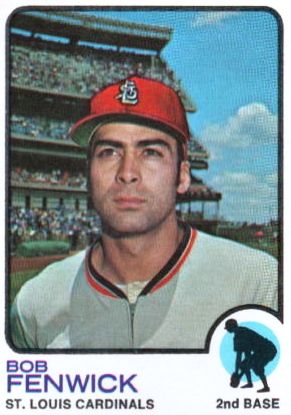 Robert Richard Fenwick was born on December 10, 1946, in Naha, which is Okinawa’s main city. In fact, his mother, Miyoko “Mabel” Miyasoto, came from an Okinawan family. Within Japan, Okinawans are viewed – and view themselves – as a separate people and culture. The same held true in Hawaii, where 25,000 Okinawans emigrated between 1900 and 1924. Most of them labored on sugar and pineapple plantations.[4] Wally Yonamine, who became a Japanese Hall of Fame outfielder, is a classic uchinanchu success story.

That winter, Fenwick worked for a relative’s business, hauling fuel oil to homes and schools in Anoka. He also worked out with another pro from Anoka, catcher Greg Dehn. Fenwick made the Cardinals roster during spring training 1973. He said, “I feel that if I play enough, I should hit around .270 or so and get on base a lot. Tell Ted Sizemore not to get fat or slow down, or else…”[13]