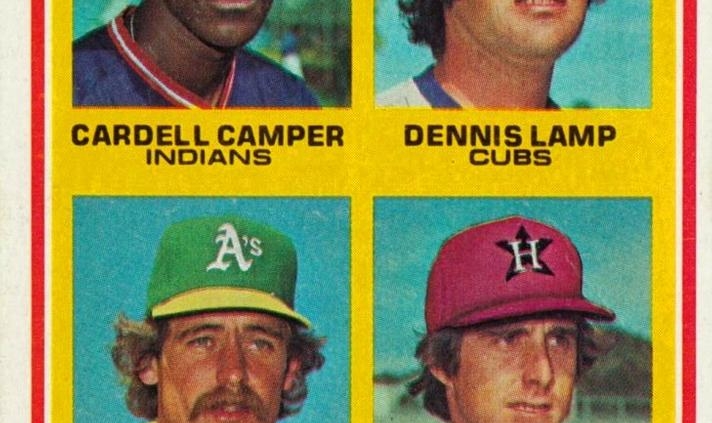 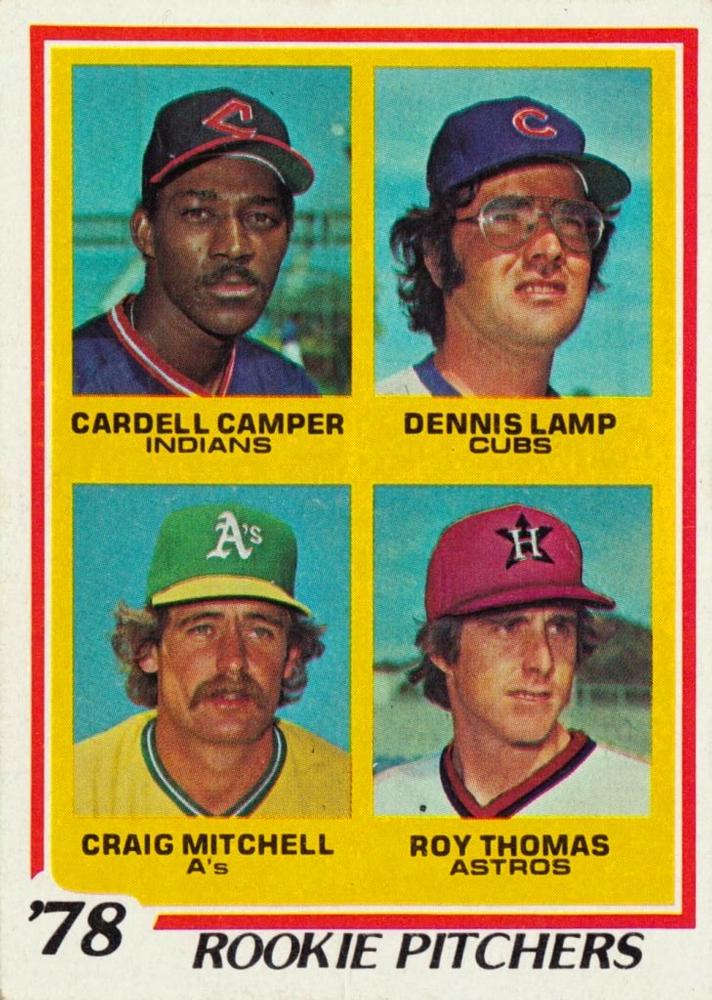 By any reasonable standard, Cardell Camper was a successful athlete. Although his major league career consisted of only three appearances for the 1977 Cleveland Indians, the right-handed pitcher posted a winning record over 10 seasons in professional baseball after lettering in four sports during high school. Later in life, Camper found what he called “true success” as a Christian minister.

Cardell Camper was born on July 6, 1952, in Boley, Oklahoma, a predominantly African- American town of approximately 600 residents located about 70 miles east of Oklahoma City. His parents, Carvell and Eddie Lee (Williams) Camper, had eight children — four boys and four girls. Their father was an agricultural worker. By 1960, when Cardell’s youngest brother Kenneth died in infancy, the family had moved 900 miles west to Wilcox, Arizona. Tragedy struck again when Cardell was 13; his 34-year-old mother died from cervical cancer.

The Campers had moved another 200 miles northwest in Avondale by the time Cardell entered Agua Fria Union High School in 1967. There, in addition to baseball, he lettered in basketball, track and field, and football. On the gridiron, he helped the Owls to a state championship as a senior All-District defensive end.1 He first ascended to the varsity baseball squad as a junior, when the school’s run of three consecutive state titles ended in the semifinals despite his 7-2 pitching record.2 On an early-career questionnaire, Cardell named teams sponsored by Crown Vacuum and Northwest Auto as amateur clubs for which he played. He described “pitching a no-hit shutout, striking out 15 batters” as especially thrilling.

Following his 1971 high school graduation, Camper enrolled at Glendale Community College to study physical education and play baseball. Unlike two of his Gauchos teammates –Karel deLeeuw and J.P. Pierson– who were selected by the Kansas City Royals and peaked in Single A, Cardell was not drafted. However, the 6-foot-3, 208-pounder signed a professional contract with St. Louis Cardinals scout Thornton Lee in early 1973.3

Camper broke in with the St. Petersburg Cardinals in the Single-A Florida State League. After going 0-1 with a 5.73 ERA in 11 innings over four appearances (one start), he was demoted to the Sarasota Red Birds in the rookie-level Gulf Coast League. Although his record was 4-6, Camper topped his team with 11 starts in his 12 appearances and earned circuit All-Star honors based on his 2.74 ERA.4 In 69 innings, he walked 47, but struck out 59 while permitting only 53 hits.

Prior to spring training 1974, Camper married Lavonne Long, a former Agua Fria cheerleader. Their union lasted the rest of his life and produced three children: son Kambrell, and daughters Charmaine and Candra. In his second stint with St. Petersburg, Camper was the ace of the staff, with an 11-6 record and 2.64 ERA for a club that finished 12 games under .500. Back in St. Petersburg to begin 1975, he was 8-2 when he was promoted to the Double-A Texas League. where he was 6-6. The Cardinals added Camper to their 40-man roster.

At the end of the 1975 season, St. Louis lost pitching great Bob Gibson to retirement after 17 seasons. Like Gibson, Camper had been nicknamed “Hoot” since entering professional baseball.5 In capsule reports on Cardinals players based on conversations with the team’s brass, writer Neal Russo described Camper that winter in The Sporting News: “Form reminds you of Gibson…Good attitude.”6

After Camper went 1-3 with a 5.14 ERA in his first seven starts for Arkansas in 1976, however, he was sent to the Cleveland Indians organization on May 28 in exchange for minor league outfielder Nelson Garcia. Cleveland promoted Camper to the Triple-A International League, but he struggled to a 4-8 mark with the Toledo Mud Hens. In 130 combined innings, Camper allowed 20 home runs – the most of his career. “My slider flattened,” he observed after surrendering three to Tidewater on June 18 while earning his first Triple-A victory.7 On August 28, Camper hurled his only shutout of the season.8

The Indians still thought well enough of the prospect to protect him on their 40-man roster. He went to the Dominican Republic to pitch winter ball but finished 0-4 with a 5.22 ERA in nine games for the Estrellas Orientales.9 Camper pitched a full season at Toledo in 1977. His 11-10 record made him the ace of a Mud Hens team that finished last in the IL at 56-84. On May 10, he beat the Charleston Charlies, 1-0, with a complete-game three-hitter.10 He held the Richmond Braves to two hits on June 4, though one was a game-winning, two-run homer by Dale Murphy.11 Next time out, he hurled a three-hit victory over the Pawtucket Red Sox.12 Inconsistency, however, led to a final ERA of 5.34 and 170 hits allowed in 167 innings, with an equal number of strikeouts and walks (86). Nevertheless, the fifth-place Indians called him up in September.

On September 11, 1977, Camper made his major league debut, working the last two innings of a 9-5 Cleveland defeat in Baltimore. The first batter he faced, Andrés Mora, flied out to left. He then caught Mark Belanger looking at a called third strike and whiffed Dave Skaggs to complete a perfect frame. Camper walked two in his second inning of work – one intentional – but held the Orioles scoreless and struck out Elliott Maddox. Six days later he hurled two hitless innings against the Blue Jays; the only baserunner he allowed reached on an infield error.

The Indians’ season ended with a doubleheader in Toronto on October 2. Camper started the second game, and his teammates built him a four-run lead before he went to the mound in the bottom of the first. He held the Blue Jays scoreless until Dave McKay’s two-out RBI single in the fourth inning pulled the home team within 5-1, and allowed another run in the fifth before turning over a 5-2 lead to reliever Rick Waits in the sixth after issuing back-to-back walks. Waits permitted both inherited runners to score but nailed down the final 11 outs to save Camper’s first (and only) major league victory, 5-4.

That winter, Camper went 5-4 with a 4.41 ERA for the Leones del Caracas in the Venezuelan League.13 Indians’ manager Jeff Torborg named him as a potential bullpen candidate during 1978 spring training, but Camper wound up with the Portland Beavers in the Triple-A Pacific Coast League.14 “He was always polished, competitive and professional, on and off the mound,” recalled fellow starting pitcher Eric Wilkins.15 In a circuit where the overall ERA was 5.03, however, Camper posted a dismal 7.40 mark in 29 appearances. On December 6, he was traded to the Philadelphia Phillies for Single-A outfielder Joe Charboneau. By the time Charboneau blossomed into the 1980 American League Rookie of the Year for Cleveland, Camper’s minor league career in the United States was over. He made only two appearances for Oklahoma City in 1979 before being demoted to the Double-A Eastern League. After an 8-7 season at Reading, the Phillies released him in spring training 1980.

Camper caught on with the Saraperos de Saltillo in the Mexican League. His record was 11-4 when players from 14 of the circuit’s 20 teams went on strike in early July, forcing the cancellation of the remainder of the schedule.16 After a new, abbreviated campaign commenced with the six remaining clubs, Camper went 8-1 with a 1.74 ERA, topping the league in victories and leading the Saraperos to their first championship in franchise history. His overall mark in 1980 was 19-5 with a 2.69 ERA. Camper spent two more years in the Mexican League, pitching for Saltillo and Chihuahua. Then, at the age of 30, he retired from professional baseball. “I’ve always known what I wanted to do. I wanted to play baseball and then I always wanted to be in the ministry,” he explained. Encouraged by a friend, he moved to San Bernardino, California, and enrolled at the International School of Theology. Camper became as associate pastor at the Loveland Church in nearby Etiwanda. By 1984, the San Bernardino County Sun reported that the coed Loveland Church softball team he managed won an award for “Most Spirit Filled Attitude” at a Calvary Arrowhead League tournament. Camper, also a player, made the tournament’s All-Star team.17

In 1989, Camper received an invitation to join a new 35-and-over league. “I didn’t think I wanted to do it,” he confessed, but he encouraged one of his softball teammates – former Seattle Mariners infielder Kim Allen – to try out. Allen wound up leading the fledgling Senior Professional Baseball Association in stolen bases. “[Camper] played left field [for Loveland’s softball squad] and had a cannon for an arm. I knew he could play in this league,” Allen observed. When the San Bernardino Pride joined the SPBA in 1990, Camper and Allen were both on the roster, with the former leading the team’s chapel services and Bible studies. “I think Cardell has always felt he’d like to share his faith on a level like this,” Allen remarked. “This may be just the beginning of new doors being opened for him.”18

Camper agreed. “I feel that God has me here for more like a mission,” he said.19 Camper noted that many of the former big leaguers on SPBA rosters had already experienced the blessings of money, cars and owning their own homes. “They’ve had everything they want and that’s success. But good success is knowing Jesus Christ is your personal savior and taking the word of God and applying it to your life and living according to the word of God. That’s good success because you’ve got peace inside.”20

Although Camper had not pitched in eight years, the San Bernardino County Sun described the 38-year-old as the Pride’s hardest thrower and said he would be the team’s closer.21 After two relief outings, however, Camper moved into the rotation and carried a no-hitter into the seventh inning of his first start. “Cardell’s pitched well, but more importantly he’s a quality human being,” said Pride manager Rich Dauer. “I’ve gained more wisdom,” said Camper, who’d also begun wearing glasses since his minor league days.22 On December 11, Camper worked into the ninth inning against Daytona Beach.23 In the Pride’s final game before the weeklong Christmas break, he carried a shutout into the seventh against the Sun City Rays and improved to 3-0.24 The league fell apart owing to financial problems before play resumed, however, and Camper returned to the ministry full time.

On December 7, 2010, Cardell Camper died at a hospital in Redlands, California.25 He was 58. He is buried at Green Acres Memorial Park in Bloomington His grave marker commemorates a “Beloved Husband, Father & Pastor” – the latter depicted by an image of Christ as the Good Shepherd.

The author would like to thank Candra Camper and the Camper family for their assistance.

This biography was reviewed by Rory Costello and Norman Macht and checked for accuracy by SABR’s fact-checking team.

In addition to sources cited in the Notes, the author consulted www.ancestry.com, www.baseball-reference.com, and www.findagrave.com.