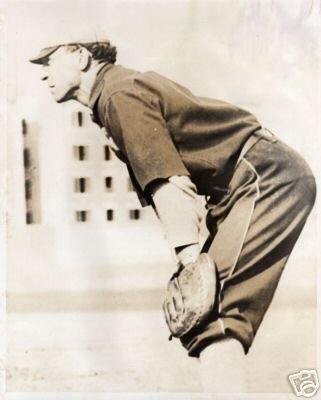 Known as Piano Legs and Cheerful Charlie, the ponderous clubber Charlie Hickman possessed one of the Deadball Era’s most potent bats. In 1903 the 5’9″, 215-pound Hickman hit one ball 100 feet over the left field fence at Cleveland’s League Park, and another completely out of New York’s Hilltop Park. “If we had the lively ball in our day, we would have had five Babe Ruths,” former Hickman teammate and gifted scout Bill Bradley said in 1926. “Buck Freeman, Charlie Hickman, Larry Lajoie, Ed Delahanty and Sam Thompson. They could hit as hard as Ruth; they could hit as far as Ruth; they could hit as often as Ruth.” Though Hickman’s powerful bat was constant during his 12-year major league career and he possessed good speed, he struggled to find a defensive position at which he could excel. Perhaps because of his defensive shortcomings, he was shuffled among five American League teams (including Cleveland twice) during his seven years in the league. Through it all, he was always a fan favorite. His genial nature, outgoing personality, and friendliness were hallmarks throughout his life. In reporting his passing the Morgantown Post said, “It could be safely said he had no personal enemies.”

Charles Taylor Hickman was born in Taylortown, Pennsylvania, on March 4, 1876, to Isaac Newton Hickman and Josephine Estelle Taylor Hickman. He was the second of the couple’s three children. His mother’s family was so prominent in the area that Hickman’s hometown (a tiny village near the college town of Morgantown, West Virginia) was named after them. From family lore we know that Charlie’s father, a carpenter and farm hand, played baseball and taught the game to his son. Throughout his career, Charlie returned to his father’s orchard to personally select trees for use in his bats, shipping the lumber off to Louisville for manufacture. He was educated in his home county’s public schools and went on to nearby West Virginia University in 1895. There he studied law, played baseball, and was a classmate and friend of legendary football coach Fielding Yost. Hickman was an early student-athlete and was compensated with board, books, and $10 per month. Though West Virginia was on the other side of the Mason-Dixon Line, it was a scant dozen or so miles from Hickman’s hometown. Charlie would make Morgantown his home for the rest of his life.

Hickman started at college as a catcher but was switched to the box when his pitching skill was realized. He turned professional in 1896 as a pitcher and part-time outfielder for New Castle (Pennsylvania) in the Inter-State League. The following season, then as a full-time pitcher, he split among West Virginia University, New Castle, and the Boston Beaneaters after being signed by Frank Selee on July 19. He tried the outfield as well as pitching, but saw little action in three years at Boston, during which the right-hander also spent time with Rochester (New York) and Providence of the Eastern League. His arm failed midway through the 1899 season, essentially ending his pitching days. These were championship years in Boston, and his club traveled to Cuba to support United States troops fighting in the Spanish-American War. While there he met and formed a lasting friendship with Teddy Roosevelt.

In 1900 Hickman moved to New York, where the Giants installed him at third base, his first regular position as a professional. He responded by blossoming as a strong hitter, though he also became a defensive liability. He once hit in 27 straight games for the Giants, but also committed 86 errors in just 120 games at the hot corner, the 20th century major league record. His offensive production dropped a bit in 1901 as he was tried at every position except catcher for the seventh place Giants, including nine games as a pitcher. Before the 1902 season, Hickman jumped to the Boston Americans, but spent less than two months there before he was traded to Cleveland for first baseman Candy LaChance.

It was at Cleveland that Charlie Hickman came into his own, as he established his reputation as a talented and feared hitter and became a favorite of the fans. He had perhaps his finest season at the bat in 1902, leading the American League in hits and total bases and becoming the team’s regular first baseman. Though still not sure-handed–he committed 40 errors–his miscues were forgiven because of his hitting. He had a career-best .361 average and ranked among the league’s leaders in most offensive categories, including home runs (tied for second with 11), RBI (second with 110), and slugging percentage (third at .539). During that season he, along with mates Bill Bradley and Nap Lajoie became the first American League trio to hit consecutive home runs. In 1903 Hickman enjoyed another outstanding season, batting .295 with 12 home runs and 97 RBI (the latter two figures each ranked second in the league).

But fielding woes would always bring Hickman back to earth. There was talk by some that many of shortstop Johnny Gochnauer‘s staggering 98 errors were thanks to Charlie’s poor play at first base. Although Hickman fielded decently when installed at second base in 1904, manager Bill Armour continued a running feud with him, finding fault with his fielding, his batting stance, and so on. Hickman claimed that he got along with Armour at first, but then became his whipping boy. “Still I persevered,” Hick later related, “for the Cleveland fans appeared to appreciate my work. They called me ‘Cheerful Hick,’ but no one can tell of the misery that I had to put in with this man Armour.”

Late in the 1904 season Cleveland, much to the dismay of its fans, sent Hickman off to Detroit for Charlie Carr and Fritz Buelow. After struggling at the plate and in the field for Detroit in 1905, and again tangling with Armour (now managing the Tigers), he was sold to Washington, where he remained for one complete season and parts of two others. He was the team’s leading hitter, but his defensive woes continued. On September 29, 1905, Hickman entered the record books again when he had a five-error game at second base. While playing in the nation’s capital he continued his friendship with Roosevelt and often visited the White House. During these years he co-owned and operated a sporting goods store that was frequented by the president’s sons; he also attended classes at George Washington University.

Though still an effective hitter who batted .284 with nine home runs for the Senators in 1906, Hickman’s inability to play defense limited his value. During spring training in 1907, Hickman suffered a knee injury that would hamper him through the rest of the season. On August 1, 1907, he was sold to the White Sox, where the knee problems limited him mainly to pinch-hitting duties. At the end of the 1907 season, Hickman’s contract was once again sold, this time back to Cleveland. He managed to hit only .234 in 65 games for the Naps in 1908. His major league career ended when Cleveland owner Charles Somers sent Hickman to Toledo of the American Association. Overall, Hickman played 1081 games in the big leagues, batted .295, and appeared at every position except catcher.

Charlie impressed immediately at Toledo as he hit .409 to finish out the 1908 campaign. The next two seasons he played the outfield and hit well while appearing in 167 Mud Hens games. He still possessed power, and thrilled fans by hitting an over-the-fence home run the day Toledo’s spacious park, Swayne Field, opened in 1909. He led the American Association in doubles, total bases, and–uncharacteristically–outfield assists (35) that year, and in triples the following year. He was playing the best baseball of his career. In spite of hitting .355 in 1911 at age 35, Toledo let him go in midseason, because, as the Washington Post reported, “his legs have gone back on him” and he “was unable to cover any territory in the field.” He latched on with the Milwaukee Brewers, also of the American Association, for 13 games before they, too, let him go, ending his professional playing career after 16 seasons.

Charlie Hickman returned to Morgantown and began a new phase of his life, still involved in baseball. In 1912 he began a scouting career for Cleveland that lasted over 14 intermittent seasons. He also assumed the coaching reins for the University of West Virginia baseball team in 1913. He held that job for five seasons, winning 70 percent of his games and capturing the West Virginia state championship in 1916. On November 1, 1913 Charlie married Pearl Taylor, his mother’s first cousin who was, like him, a native of Greene County, Pennsylvania, but then a resident of Morgantown. Three children were born to them, but only Harriet and Charles Jr., survived infancy.

Hickman began a successful political career in 1918 when he was elected recorder of the city of Morgantown. He became mayor that same year and served three terms in that office. During World War I he also served as captain of operations in the Department of Justice at Morgantown. In 1932 he was elected sheriff of Monongalia County. His health had been failing him for several years, however, as he had suffered a number of minor heart attacks and saw his weight drop to just 154 pounds. He died due to heart-related problems in his home on April 19, 1934, at age 57, and was buried in East Oak Grove Cemetery, in Morgantown.