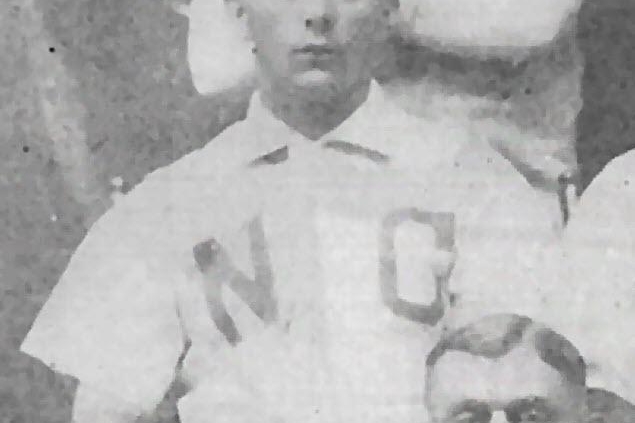 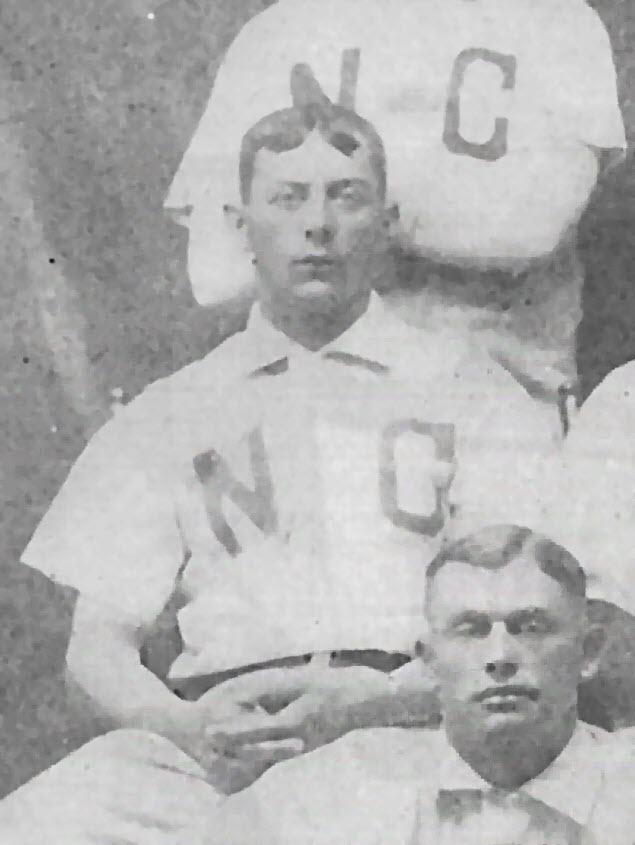 Inspired by the debut of pitcher “Noodles” Hahn, the Dayton Herald published an article in 1899 celebrating the colorful nicknames of ballplayers. Among the names mentioned were “Eagle Eye” Beckley, “Fatty” Childs, and “Three Fingered” Smith.1 Beckley and Childs were well-known major leaguers. Clarence “Three Fingered” Smith was an ace of the New Castle Quakers in the Inter-State League.

On September 15, 1874, Clarence Smith was born with all ten fingers, but he would lose two at the age of 18. Born and raised near Lewisburg, Pennsylvania, he was the youngest of the five children of carpenter William G. Smith and Amanda (Gemberling) Smith.2

On November 9, 1892, the Lewisburg Journal partly told the story of Clarence’s injury: “Mr. Clarence Smith, of this place, engaged as a brakeman on the Pennsylvania railroad, had two fingers of his right hand crushed recently.”3 The incident was further described by Sporting Life in 1897: “Smith was coupling cars and got his hand caught between the bumpers, with the result that his third and fourth fingers [ring finger and little finger] were so badly crushed they had to be amputated.”4 Historian Evgenia Shnayder explained the danger faced by brakemen:

“Nineteenth-century couplers came in a variety of not always compatible shapes and styles, and brakemen often had to use their hands to force the mechanisms together. A failure to move quickly or simple bad luck could cost a man a hand or a finger. … Lost fingers did not end careers. They became the mark of a brakeman; you could recognize one by their missing fingers.”5

A pitcher before the accident, Smith continued to pitch after losing two fingers on his pitching hand and became known as “Three Fingered” Smith. He pitched for local semipro teams through 1895. The young man was 5-foot-8 and 165 pounds.6

Smith gained his first minor-league experience in May 1896 with the Shamokin team of the Class-B Pennsylvania State League. The team relocated to Reading in June, and both the team and league disbanded in July. The Philadelphia Athletics were a member of the league and survived by moving to the Class-A Atlantic League in July. Smith caught on with the Athletics.

Smith’s combined numbers in 1896 for Shamokin/Reading and the Athletics bear the telltale signature of a wild pitcher: 174 bases on balls, 32 hit batsmen, and 22 wild pitches in 266 ⅔ innings. In a game against Wilmington, Delaware, he “seemed to have absolutely no control of the ball.”7 However, when he did get the ball over the plate, he showed his potential. On July 21, 1896, he hurled a two-hitter in the Athletics’ 14-3 thrashing of Paterson, New Jersey. Playing first base for Paterson was 22-year-old Honus Wagner, who went 0-for-2 at the plate and drew two walks.8 The Athletics were unimpressed with Smith and released him in August. He joined the New Castle Quakers in 1897.

The Inter-State League was a Class B circuit with five Ohio clubs — Dayton, Mansfield, Springfield, Toledo, and Youngstown — and three near Ohio: New Castle in western Pennsylvania; Wheeling, West Virginia; and Fort Wayne, Indiana. New Castle was one of the smallest cities in the league but was growing rapidly. Its population of 11,600 in 1890 swelled to 28,339 by 1900.9 The growth was fueled by the manufacture of tin plate; by 1900 New Castle was regarded as “the tin plate capital of the world.”10 The New Castle Quakers played home games at Pearson Park in 1897 and moved the following spring to a new ballpark, the Cascade Grounds, which was touted as the finest in the league.11

Smith’s wildness continued in the spring of 1897. He walked eight batters in New Castle’s 8-5 victory over Fort Wayne on June 4 and gave eight free passes in a 13-4 loss to Mansfield on June 15.12 But as the season went on, his control improved and he “showed major-league form.”13 Against Toledo on July 22, he threw a four-hit shutout with no walks, and he blanked Springfield eight days later, allowing two hits and three walks.14 The Quakers were in first place on the Fourth of July with a 43-17 record15 but went 29-37 the rest of the way and finished in third place. Smith’s season record was 22-14; his 22 wins tied for the league lead.16

“In making an ‘out curve’ he holds the ball with his two fingers spread wide open, and with his thumb about the centre, on the opposite side of the sphere. He also throws a ‘drop’ with his fingers spread, but there is a slight change in the position of his thumb. The ‘in shoot’ and the ‘raised ball’ are thrown with the fingers close together, the difference in direction being made by the position of the thumb and the motion of the arm.”17

With “a powerful arm and strong physique,”18 Smith was a workhorse for the 1898 Quakers. He compiled a 22-23 record for the fourth-place team. He defeated Springfield twice in three days, with a six-hitter on July 28 and a seven-inning, one-hit shutout on July 30.19 The highlight of the season was his nine-inning no-hitter against Dayton on August 28.20 “He has everything,” said umpire Bud Lally. “I never saw a better drop ball, and he has a wide curve and plenty of speed.”21 Smith’s teammate, Ed Ashenbach, believed that having fewer fingers increased Smith’s effectiveness.22

In the offseason Smith was drafted by the Detroit Tigers of the Class A Western League, but the Tigers did not want to pay the required $300 and instead offered a trade. After the Quakers rejected the offer, the Tigers rescinded their draft pick. Smith did not wish to play for Detroit and was pleased to return to New Castle for the 1899 season.23

On April 3, 1899, Smith married Helen V. Mackey of Lewisburg.24 About this time, he met Christy Mathewson at Bucknell University in Lewisburg and purportedly tutored him on pitching.25 Mathewson pitched for the school team as a freshman that spring.

On May 17, 1900, Smith threw a five-hit shutout in New Castle’s 8-0 rout of Mansfield.28 Five days later, he earned the victory in a 9-7 triumph over Toledo; future Hall of Famer Addie Joss was the losing pitcher.29 Smith seemed on track for another fine season, but in Dayton on June 11, he pitched his last minor-league game. He allowed eight runs in the first seven innings, and the Quakers trailed, 8-5. His team rallied for six runs in the top of the eighth to take an 11-8 lead, which he was unable to hold; Dayton scored one run in the eighth and two in the ninth to send the game to extra innings. New Castle scored a run in the top of the tenth to go ahead, 12-11, but Dayton scored two off Smith in the bottom half to win, 13-12. Quakers manager Pat Wright was furious with him, and he was soon released.30

Smith settled in Berwick, Pennsylvania, 40 miles east of Lewisburg, where he was employed as a hammersmith in a railroad car shop. He pitched for a Berwick semipro team for about six years. He and his wife welcomed two children, son Donald born in 1915 and daughter Miriam born in 1919. About 1924, the family relocated to East Rochester, New York. Smith worked at a railroad car shop until his retirement in 1949.31

It seems likely that Smith read with interest about another three-fingered pitcher, Mordecai “Three Finger” Brown, who made his major-league debut in 1903 and was inducted into the Baseball Hall of Fame in 1949.

In 1955, shortly before his 81st birthday, Smith wrote a letter that was published in the Rochester Democrat and Chronicle. According to the newspaper, he “still is intensely interested in baseball and follows the games closely.”32 In his letter, Smith commented on the modern game and offered a few suggestions:

“For one thing, the admission price is too high. Get rid of the bench-warmers. Twenty-three players are not needed. … I can show you a picture of a team that won the pennant in the Old Inter-State League with only 13 players.

“I think that if the pitchers knew they would be shipped out if they could not go nine innings, you would see better pitching. No manager should be allowed to change pitchers more than twice a game. The fans get tired waiting while pitchers are parading from the bull pen — sometimes two or three an inning.”33

On August 10, 1956, at the age of 81, Smith died at the Monroe County Infirmary in Rochester. He was buried nearby at the Pittsford Cemetery in Pittsford, New York.34

This biography was reviewed by Bill Lamb and Norman Macht and fact-checked by Chris Rainey.

5 Evgenia Shnayder, “When the Loss of a Finger Is Considered a ‘Minor’ Injury,” Spatial History Lab, Stanford University, September 15, 2000, Web.stanford.edu/group/spatialhistory/cgi-bin/site/pub.php?id=65.