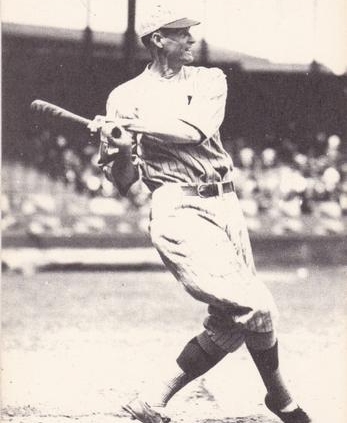 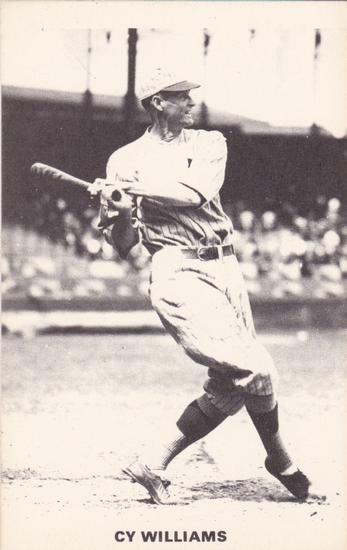 The National League’s career home-run leader until his record of 251 was surpassed by Rogers Hornsby in 1929, Cy Williams is remembered today primarily for his slugging achievements with the Philadelphia Phillies during the 1920s, but the 6’2″, 180 lb. center fielder began to show his potential as a power hitter while with the Chicago Cubs towards the end of the Deadball Era. In a profile of Williams entitled “The Greatest Outfielder in the National League,” which appeared in the September 1916 issue of Baseball Magazine, Ward Mason called an already 28-year-old Williams a “great all ’round talent with a wealth of sheer natural ability which is unrivaled in the older circuit,” but went on to write that “in all this there isn’t so much an appreciation of what Williams has already accomplished as a vague but definite impression of what he may do when he gets good and ready.”

The son of Oscar and Anna (Mead) Williams, Fred Williams was born on December 21, 1887, in Wadena, Indiana, a town of only 75 residents according to the 1890 edition of the Indiana Gazetteer & Business Directory. Nonetheless, two well-known baseball figures were born in Wadena within three months of one another: Williams and Otis “Doc” Crandall. A tall, slender farm boy who bore a striking likeness to Walter Johnson in face and posture, Fred acquired the nickname “Cy,” which was commonly applied to rural-looking youngsters of the era, when he matriculated at the University of Notre Dame in 1908. He excelled in athletics in South Bend, playing backup left end (Knute Rockne was the backup right end) on the 1910 Fighting Irish football team, which was just beginning to be recognized as a “Western” power, and winning letters in track. Williams’ best events were the high hurdles and the broad jump; he did the 120-yard high hurdles in 15.6 seconds, and his best broad jump was a fraction over 22’3″.

According to Baseball Magazine, “Williams never played even half a dozen games of baseball in his life before he went to Notre Dame, and those games were of the scrubbiest kind.” During the Deadball Era the Fighting Irish baseball team frequently played exhibition games against minor- and major-league teams, and during one such exhibition Cy attracted the attention of a scout from the Chicago Cubs who wanted to sign him on the spot. “I asked him if he thought I was able to go up to high company and make good right away,” Williams recalled. The scout said no. “That is what I thought,” said Cy. “Now, if I sign a contract it will make me ineligible for college athletics and I should like to compete in them as long as I am here.” Accepting that answer, the scout asked the young center fielder for his word that he would give Chicago first choice if he ever considered signing. “I promised,” Cy recalled, “and I kept my promise, even though somewhat unusual circumstances arose after that. The scout left the employ of [Cubs president Charles] Murphy and joined the Cleveland club. While there he visited me again and wanted me to sign for Cleveland. But I told him I had agreed to give Murphy first choice and I would keep my word.”

Just before the start of his senior year, Williams, who was living near Chicago, received a letter from Murphy asking him to call at the Cubs office. “Naturally I complied with this request,” Cy recalled, “and while I was there Murphy asked me to sign a contract. He said no one would know anything about it, so it couldn’t possibly interfere with my participation in college athletics. Finally, after considerable persuasion, he induced me to sign. I will say that no one did know anything about this contract save Murphy and myself and that he treated me fairly throughout.” After graduating from Notre Dame with a degree in architecture, Williams bypassed the minors and reported directly to the Cubs, turning down an opportunity to compete in the 1912 Stockholm Olympics as a hurdler and broad jumper.

Making his major-league debut on July 18, 1912, Cy Williams appeared in only 28 games that summer, batting .242 without a single home run. In fact, his first three seasons as a professional were fairly uneventful; he never played more than part-time, and about the only item of interest is that he played under a different manager each year. That oddity continued for each of Cy’s half-dozen years with the Cubs, during which he played for Tinker, Evers, and Chance. (Tinker called him “the greatest natural outfielder I ever saw.”) As his career progressed, Williams served under a total of 14 different managers in his first 14 years in the majors, a strange record that may never be surpassed.

Finally getting a chance to play regularly in 1915, the 27-year-old Williams batted .257 and slugged 13 home runs, good enough to rank second in the NL behind Gavvy Cravath‘s 24. Six were inside-the-park homers, for which Cy could thank his blazing speed; a 1915 article from the South Bend Tribune stated that Williams was “said by many competent judges to be the fastest runner in the national game.” The following year Cy improved his batting average to .279 and tied with Dave Robertson of the New York Giants for the NL lead with 12 home runs. He tailed off in 1917, however, batting .241 with just five homers. Amidst rumors of dissension between him and manager Fred Mitchell, the Cubs dealt him to the Philadephia Phillies in December for Dode Paskert.

“Williams was about the best fly catcher in the league and a fairly good batsman, but he had a fatal weakness: He possessed a poor throwing arm,” wrote the Chicago correspondent to The Sporting News after the trade. “A great throwing outfield is one of the pet hobbies of Mitchell and it was a source of regret on his part that he couldn’t boast such a combination last season.” The Philadelphia correspondent wrote: “[Pat] Moran expects to develop Williams into a hitting star. Certainly the Broad and Huntingdon grounds here will help hike Williams’ batting averages. He always hit a million when he came here. Cy is one of the fastest outfielders in the country and he is expected to more than make good here. Williams is 29 and Paskert is 36, so about the only way the Phils can get the worst of the exchange is for the Army to draft tall Cy.”

The trade proved to be one of the worst in Cubs history. A left-handed, dead-pull hitter (Cy himself was quoted as saying “I couldn’t hit a ball to left if my life depended on it.”), Williams was a natural for the Baker Bowl, though it took him a couple of years before he really found his groove. Starting in 1920, he batted over .300 in six of the next seven seasons and reached double figures in home runs nine years in a row. The only year that Williams didn’t bat .300 over that span was 1923, when he batted .293 and blasted 41 round-trippers to take over the NL career home-run record from Roger Connor. National League managers recognized that the best defense was to play him extremely deep and around toward right field—the first “Williams shift,” more than 20 years before Lou Boudreau developed a similar plan to defense Ted Williams.

Retiring from the majors after the 1930 season, Williams spent one year in the Eastern League as the player-manager for Richmond, Virginia, then returned to his several-hundred acre dairy farm in Wisconsin where he worked as an architect and started a construction business. Some of the finest buildings on Wisconsin’s Upper Peninsula stand today as tributes to his architectural talent. In his free time Cy liked to hunt and fish, often engaging in those pursuits with his fellow left-handed slugger Ted Williams. Though he was a left-handed athlete all the way, Cy was a moderately successful artist as a right-hander. In 1966 the city of Three Lakes, Wisconsin, dedicated Cy Williams Park, not far from the Lake Terrace Estates resort development created by the Williams Construction Company. Cy Williams died at age 86 on April 23, 1974, in Eagle River, Wisconsin.