This article was written by Bo Carter 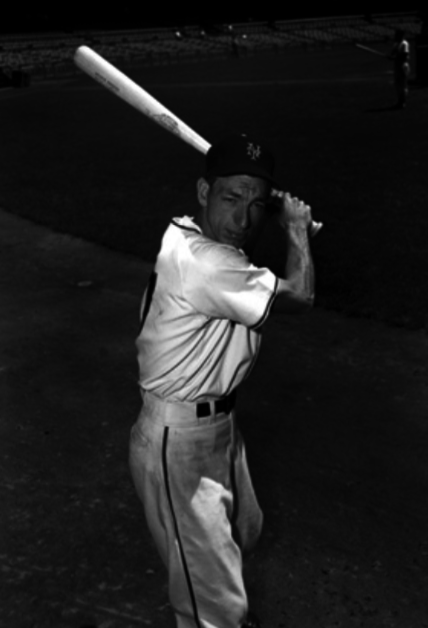 In a quote the late, great Dizzy Dean might have said: “Earl Rapp hit a cool .091 for those world-champeen New York Gints in 1951.”

Rapp’s colorful career included five different teams in a career spanning parts of three seasons (1949, 1950, and 1952), recognition as the top pinch-hitter in the American League as a left-handed batter with the hapless St. Louis Browns and Washington Senators, 15 seasons in the minor leagues, and a 30-year career as a scout for the Houston Colt .45s/Astros, the Kansas City Royals, the Montreal Expos, and the Cincinnati Reds.

A native of Corunna, Michigan, he spent his youth and most of his life in Swedesboro, New Jersey, a borough close to Philadelphia. He was born to Chester Harrison Rapp, an industrial plant inspector, and Mary Catherine (Delp) Rapp, a housewife who helped rear their five sons. (Whether his parents intended to honor the Duke of Wellington is unknown. Wellington was the English general who defeated Napoleon in the Battle of Waterloo in 1815 and later was the Britih prime minister.) Rapp’s ancestry on his father’s side was German/Swedish.

Rapp was signed by the Philadelphia Phillies at the age of 18 in 1940 after a four-sport career at Old Swede High School in Swedesboro. His first team was the Wausau Timberjacks of the Cladd D Northern League. Rapp hit .316 for Wausau in 62 games.

Before the 1941 season, the Phillies sent Rapp to the Boston Red Sox organization, and in June of that season, he was sent from the Red Sox to the Detroit Tigers organization. Details of the transactions are un clear. In the Red Sox farm system, he played for Oneonta of the Class C Canadian-American League; the Tigers placed him with Jamestown of the Class D Pennsylvania-Ontario-New York League. In 1942 he was with Hagerstown of the Class B Interstate League and briefly with Buffalo of the International League.

Rapp entered the Army in 1943 and missed the 1943-45 seasons. Although he rarely spoke about his exploits in World War II, Rapp, an infantry sergeant, fought in the Battle of the Bulge in December 1944 and was awarded the Silver Star and the Purple Heart after being wounded in the leg during the Battle of Colmar Pocket in 1945 as the Allies pushed into Germany. After the war in Europe ended, he was stationed with occupation forces until early 1946.

Rapp returned to the Tigers organization in time to play in 126 games in 1946 with Williamsport (Class A Eastern League) and Buffalo. Playing in Triple-A ball for the first time, Rapp batted .324 in 62 games with Buffalo. He spent all of 1947 with Buffalo, batting.294. The Tigers sent him to their Pacific Coast League farm team in Seattle in 1948.

Rapp joined the Tigers in 1949 and made his major-league debut at Detroit’s Briggs Stadium on April 28, drawing a walk as a pinch-hitter. On May 7 he was traded to the Chicago White Sox for first baseman Don Kolloway. On May 13 with the White Sox, he got his first big-league hit, a two-run pinch-hit triple off Cleveland’s Mike Garcia.

For the Giants, Rapp appeared in 13 games, all as a pinch-hitter. He walked three times, struck out twice, and got one hit, a single off Max Surkont of the Boston Braves. Rapp was placed on waivers as the Giants pressed toward the pennant and was claimed by the St. Louis Browns on September 1.

Rapp had a successful September for St. Louis. Ae played right field and batted cleanup against right-handed pitchers, batting .327 with a .394 on-base percentage in 110 plate appearances. He hit both of his big-league home runs, one off the Yankees’ Tom Morgan and the other off the White Sox’ Ken Holcombe. The Giants went on to the World Series. Rapp was voted a small World Series share.

In June of 1952 the Browns traded Rapp to the Washington Senators for infielder Fred Marsh. Between the two teams he batted only .224, but had an American League-leading eight pinch hits. After the season the Senators sold his contract to San Diego (PCL), and his days in the major leagues had ended. His final appearance, on September 22, was as a pinch-hitter against Bobo Newsom of the Philadelphia Athletics with the bases loaded. Newsome hit Rapp with a pitch, earning him an RBI. In 135 major-league games, Rapp batted .262.

Known as a pure hitter to all fields from the left side of the plate (he threw right-handed), the 6-foot-2, 185-pound slugger had a career batting average of .313 in all or parts of 15 seasons in the minors. He spent the entire 1952 campaign in the big leagues but always had an appreciation for those playing in every area from C ball to Triple-A. In 1,869 minor-league games, he missed 2,000 hits by one safety (1,999) and slugged 203 homers.

From 1960 to 1989, Rapp worked as a scout and saw literally thousands of players for Houston, Kansas City, the Expos, the Reds, and the Phillies. One of his most prized draftees was Mark Gubicza of the Kansas City Royals, a second-rounder out of Penn Charter High School in Philadelphia who won 132 games in 14 seasons, 13 of them with the Royals. Rapp scouted Gubicza throughout his high-school career and provided extensive cross-check records.

The understated Earl Rapp was a humble popular hero who probably arrived in the majors three to four years after his playing peak but had productive years in the PCL. He was described by many as a player who simply enjoyed the camaraderie of the clubhouse and diamond.

Rapp was slowed in later years by a heart condition with surgery in 1989 but served as a special consultant for the Toronto Blue Jays for several years before he died on February 13, 1992, in Swedesboro from a number of heart and related problems. He spent several of his later years as an employee and avid golfer at Beckett Country Club in the New Jersey borough.

Rapp was survived by sons Earl W. Rapp, Jr. and Richard W. Rapp; a daughter; five grandchildren; and four brothers. His wife, Amanda Lorah Rapp (1913-91) preceded him in death by a year.

Rapp did not leave his mark in many record books or finish the season with the pennant-winning Giants in 1951, but contributed to the game in leadership areas and in devoting more than 50 years of his lifetime to amateur and professional baseball. He had accumulated a considerable collection of baseball memorabilia along the way. Many of his autographed photos and baseballs were from Hall of Fame players, managers, and baseball celebrities like Charlie Dressen, Leo Durocher, Gabby Hartnett, Rogers Hornsby, Lefty O’Doul, Mel Ott, Red Rolfe, and Dick Sisler. His collection, which was auctioned off in 2013, auction included baseball signed by the 1951 Giants.

History of the Earls and Dukes of Wellington. thefreedictionary.com/Earl+of+Wellington

Reunion Page of the 28th Infantry, US 6th Army, Battle of the Colmar Pocket, 1945 28thinfantrydivisionassoc.org/images/Colmar%20Pocket%20/

The Battle of the Colmar Pocket from History of War Weapons historywarsweapons.com/battle-of-the-colmar-pocket/