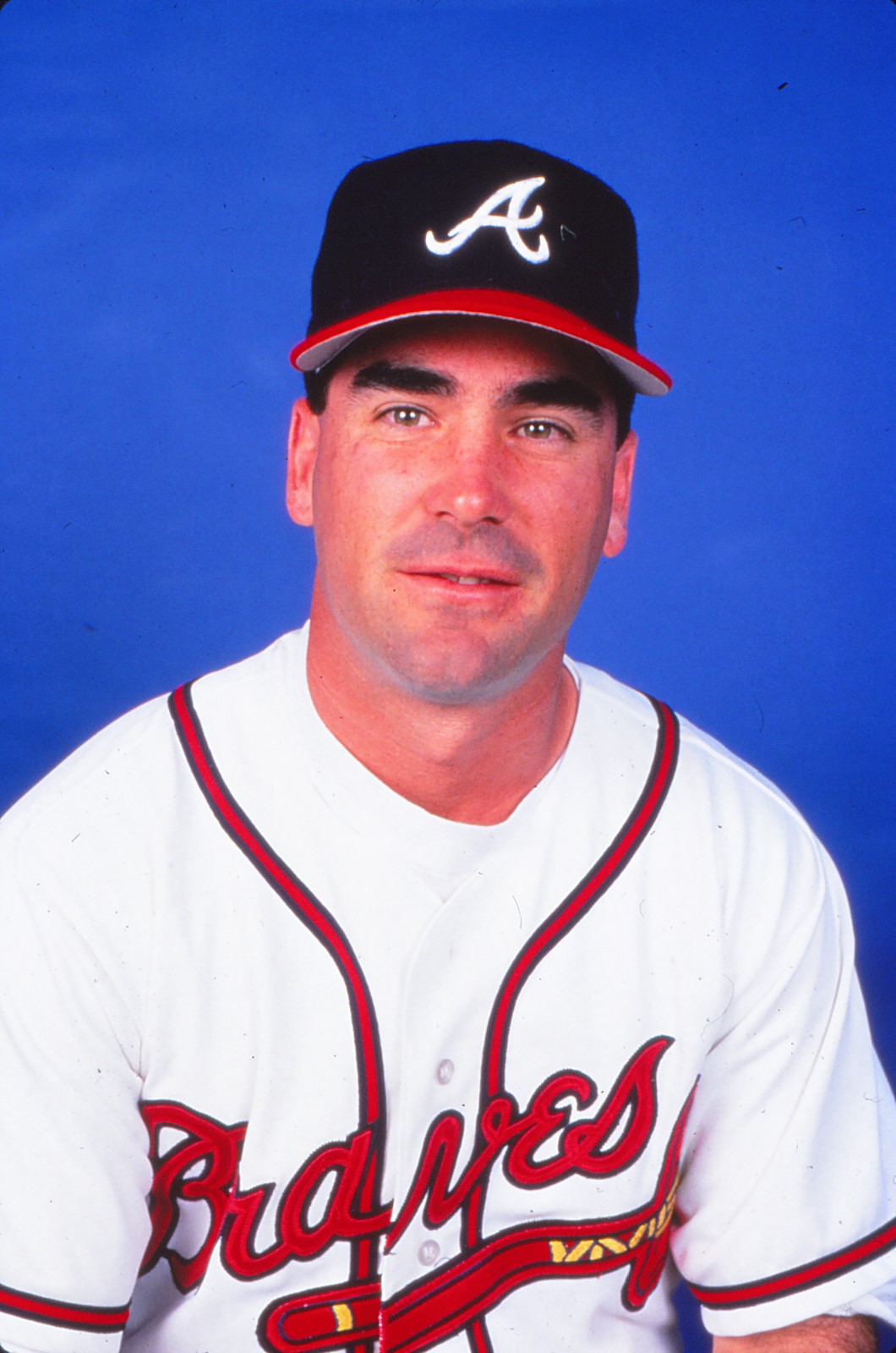 Ed Giovanola was a utility infielder who played in 218 major-league games over the course of five seasons from 1995 to 1999. He batted left-handed and threw right-handed. Giovanola was a versatile infielder who played second base, third base, and shortstop during a professional baseball career that spanned 10 seasons. In the majors, he played for the Atlanta Braves (1995-1997) and the San Diego Padres (1998-1999).

Despite the brevity of his big-league career, Giovanola played on three teams that won the National League pennant, the 1995 and 1996 Braves and the 1998 Padres. He earned a World Series ring as a member of the 1995 Braves. Giovanola made one major-league appearance as a pitcher, throwing 1⅓ scoreless innings for the Padres on August 25, 1999, against the Philadelphia Phillies. This game also proved to be his major-league finale.

Edward Thomas Giovanola was born on March 4, 1969, in Los Gatos, California, in the San Francisco South Bay. His parents, John and Kathleen Giovanola, settled in Santa Clara County not long after John’s graduation from Santa Clara University, where he was a standout second baseman on the university’s 1962 team that reached the finals of the College World Series, losing to Michigan. John Giovanola went on to a successful career as an executive for a cement company.1

In high school, Ed Giovanola starred as a middle infielder for the Bellarmine College Prep Bells, one of California’s most storied high-school baseball programs. Bellarmine has produced 14 big leaguers, including Joe Albanese, Pat Burrell, and Wayne Belardi.2 Giovanola capped his high-school career in 1987 by being named to the San Jose Mercury-News All-County Baseball team as an infielder.3 He followed in his father’s footsteps and earned a scholarship to play baseball for the Santa Clara University Broncos, one of the powers of the West Coast Conference. In Giovanola’s freshman year, the Broncos reached the NCAA tournament. As a sophomore, Giovanola earned first-team All-American honors as a second baseman.4 He graduated in 1992 with a degree in economics.5

Giovanola was selected by the Braves in the seventh round of the 1990 amateur draft. He arguably proved to be the third-best major-league player the Braves selected that year, behind first overall selection Chipper Jones and 10th-round selection Tony Graffanino.6

The 21-year-old Giovanola began his professional baseball career with the Idaho Falls Braves of the Rookie-level Pioneer League. He tattooed the baseball in Idaho Falls, compiling an eye-popping .388 batting average and an equally impressive .474 on-base percentage in 25 games. The Braves quickly moved Giovanola up to the Sumter (South Carolina) Braves of the Class-A South Atlantic League, where his hitting cooled to a more modest .244 in 35 games. Giovanola displayed enough promise to earn a promotion in 1991 to the Durham Bulls of the Class-A Carolina League. He spent considerable time at every infield position except first base for the 1991 Bulls, posting just 15 errors over a 101-game season while hitting .254.

The next two summers of Giovanola’s career were spent with Greenville (South Carolina) of the Double-A Southern League. Giovanola played on a stacked Greenville Braves club that demonstrated the talent-scouting and acquisition acumen of the John Schuerholz-era (1990-2007) Atlanta organization. This Grady Little-managed team went 100-43, winning the East Division by an astounding 30 games, and defeated the Chattanooga Lookouts in five games to win the Southern League championship. Giovanola’s teammates on the 1992 Greenville Braves included Chipper Jones, Javy Lopez, Mike Mordecai, and Tony Tarasco. Giovanola was a part-time performer for the club, posting a.267 batting average in 302 plate appearances.

Giovanola returned to Greenville for the 1993 season, playing primarily third base. His most successful 1992 teammates had advanced in the Braves organization, and the Greenville team returned to earth in 1993, posting a 75-67 mark. The 24-year-old infielder made the most of his opportunities, hitting .281 with a.408 on-base percentage. His performance earned him a promotion in 1994 to the Triple-A Richmond Braves, for whom he batted .282 in 98 games. He was in line for a September call-up to Atlanta, but the strike-shortened season prevented him from making his major-league debut.

In 1995 with Richmond, Giovanola batted .321 in 99 games while playing primarily shortstop. Called up in September, he played in 13 games, seven of them at second base. The 26-year-old made his major-league debut on September 10, 1995, replacing Chipper Jones at third base in the third inning of a 5-4, 11-inning loss to the Florida Marlins. He walked twice in five plate appearances, going 0-for-3 in the game. Overall, he struggled at the plate, getting just one hit and three walks in 17 plate appearances. He had been called up after the deadline for naming postseason rosters, and didn’t play as the Braves won the World Series against Cleveland, its first World Series championship since the franchise relocated to Atlanta.

Giovanola bounced between Richmond and Atlanta in 1996. Despite his strong play at the Triple-A level, he had a hard time earning a permanent spot on the Atlanta roster, which had significant depth in the middle infield, including Mark Lemke, Jeff Blauser, and Rafael Belliard. He played in 43 games for the 1996 Braves, hitting .232 in 82 at-bats. He played in 25 games as a shortstop, six as a third baseman, and five as a second baseman.

Giovanola spent most of 1997 in Richmond, batting.291 in 116 games. He played in just 14 big-league games, all in August and September and mostly at third base. Giovanola had 10 plate appearances with the Braves in 1997. The Braves put him on waivers after the season, and on October 13 the San Diego Padres acquired the 28-year-old.

Giovanola played in a career-high 92 games for the 1998 Padres as a utility infielder, filling in primarily at second base for Quilvio Veras and at third for Ken Caminiti.7 He batted .230 in 139 at-bats. Giovanola hit his only major-league home run on June 27 in a 5-1 win against the Anaheim Angels. In the eighth inning, Giovanola lined a Shigetoshi Hasegawa fastball over the right-field fence at San Diego’s Qualcomm Stadium. The Padres won their second NL West title in three years that season, winning a franchise-record 98 games and taking the division by 9½ games over the San Francisco Giants. For the fourth consecutive season, Giovanola played on a team that made baseball’s postseason but was not included on any of their playoff rosters.

The 1999 season was Giovanola’s final campaign in Organized Baseball. He played in 56 games as the Padres finished fourth in the NL West and in 36 games for the Las Vegas Stars, who finished third in the Pacific-South Division of the Triple-A Pacific Coast League. Giovanola played primarily second, third, and shortstop for San Diego and fell below the Mendoza Line for the first time in his career, hitting just .190.8

In his final game as a major leaguer, Giovanola made his professional debut as a pitcher. This was, in fact, his first pitching appearance since Little League.9 On August 25, 1999, he recorded the final four outs for the Padres in a 15-1 blowout loss to the Philadelphia Phillies. Giovanola, the Padres’ sixth pitcher of the afternoon, surrendered one hit and two walks while retiring Alex Arias, Kevin Sefcik, Gary Bennett, and Kevin Jordan, all on fly balls.10 The Padres released him at season’s end and the 30-year-old retired from baseball shortly thereafter. Giovanola settled in San Diego County. He has worked in the wireless phone business as a retail store manager for T-Mobile. As of 2019 he was working as a national sales manager for the realtor Allison James Estates.11

In addition to the sources cited in the Notes, the author relied on Baseball Reference.com.

2 “High Schools That Have Produced the Most MLB Players,” MaxPreps, March 31, 2014: maxpreps.com/news/v7K4hqw190KNxI5snRRHTQ/high-schools-that-have-produced-the-most-mlb-players.htm.

8 According to MLB.com, “The Mendoza Line was a term coined by a teammate of Mario Mendoza on the 1979 Mariners – usually credited to Tom Paciorek or Bruce Bochte – as a joke on the light-hitting shortstop, who typically carried an average around .200 (though he actually finished with a career mark of .215).” m.mlb.com/glossary/idioms/mendoza-line.