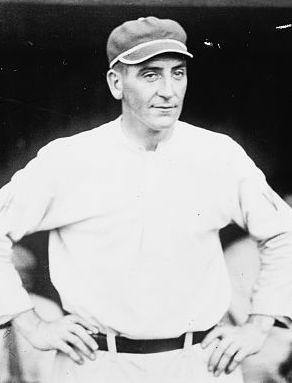 Like his contemporary in the National League, Mickey Doolan, George McBride was the prototypical “good-field, no-hit” shortstop during the Deadball Era. Widely viewed as the best defensive shortstop in his league, McBride struggled mightily at the bat. A relatively large shortstop, standing 5’11” and weighing 170 pounds, McBride was described in the press as an “aggressive, alert, and quick-witted” fielder. He led the AL in fielding percentage five times, including four times consecutively from 1912 to 1915, and was near the lead in most other years. Meanwhile, he achieved only a .218 lifetime batting average, never exceeding .235 for a single season. He was an iron man during his days as the regular shortstop for the Washington Senators, and was recognized as one of the headiest players of his day.

George Florian McBride was born in Milwaukee on November 20, 1880, to the former Mary Frommell and Peter McBride, an Irish immigrant, Milwaukee city supervisor, policeman, shoemaker, and saloon keeper. George became enchanted with baseball at an early age and spent much of his youth engaged in schoolyard and sandlot games. In 1901, at the age of 21, he headed west to play third base for the Sioux Falls Canaries, an independent team participating in a loosely structured South Dakota baseball circuit. After completing the season there in early September, he returned to Milwaukee, where the local entry in the fledgling American League was mired in last place and missing the services of its starting shortstop, Wid Conroy, who had recently sprained an ankle. According to McBride, he was alerted by local newspapermen that there might be an opportunity for him to play for the Brewers in Conroy’s absence. He appeared at Lloyd Street Grounds prior to a game on September 12, and was invited by manager Hugh Duffy to suit up. “The new man’s play was on the brilliant order,” the Chicago Tribune reported. McBride played in three games for the Brewers, handling twelve chances flawlessly in the field while collecting two hits in 12 at-bats.

McBride re-signed with the Brewers for the 1902 season, but after the franchise moved to St. Louis, he became one of the few players ever to jump a major league contract for a minor league one, signing with Milwaukee’s team in a new outlaw league, the American Association. He split time that year between Milwaukee and Kansas City, also of the American Association, as a third baseman, then played as a second baseman for Peoria (Illinois) and on to St. Joseph (Missouri), both of the Western League, in 1903. He achieved the highest single season batting mark of his professional career in 1903, averaging .286 for the year. He remained at St. Joseph in 1904, returning to the shortstop position that he had played in his abbreviated big league stint in 1901.

In August 1904 the Pittsburgh Pirates purchased McBride for $1,000, but he wasn’t asked to report until spring 1905. He served as a utility infielder, playing in 27 games, sometimes as a sub for an injured Honus Wagner at short. On July 5, he was traded to the St. Louis Cardinals for Dave Brain and cash. With St. Louis McBride finally settled into the position he would call home for the rest of his career, starting 80 games at shortstop for the Cards in 1905, and another 90 at the position in 1906. While his fielding ranked among the best in the National League, his hitting was abysmal. He averaged only .217 in 1905, and was only batting .169 in 1906 when he was sold to Kansas City to finish out the season. He continued his strong play at short for the Blues through the end of the 1907, while also showing improvement at the plate, raising his average to .269 in his final year with the club.

McBride’s nomadic baseball wanderings ended following the 1907 season, when he was purchased by the Washington Senators of the American League. Beginning in 1908, McBride played 13 seasons with the Nats, holding down the regular shortstop position for the first nine of those years. He was considered an iron man for his time. From 1908 to 1914, he played at least 150 games a season, including every Senators game during the 1908, 1909, and 1911 seasons. He was the AL leader in fielding percentage in 1909 and in each of the four seasons between 1912 and 1915, and always among the league leaders in putouts, and assists. His defense was such that he received votes for the Chalmers Award in 1913 and 1914 despite batting .214 and .203 in those respective years. In addition to his superior glove work, McBride was also noted for the good head he had for the game, and was named field captain of the Nats in 1909, a title he held throughout the remainder of his playing days.

Never strong from the plate, McBride did not hit for either average or power. He compiled a paltry .218 lifetime batting average with just seven home runs, and never collected more than 26 extra base hits in any season. His most productive and consistent offensive seasons in the AL were from 1908 through 1911, during which he averaged between .230 and .235 a season. His hitting declined in the years following, as his average dipped to only .203 and .204 in 1914 and 1915, respectively, while still playing full time. Relegated to part-time duty after that, McBride mustered only a .185 mark over his final four seasons. Like many bad hitters during the Deadball Era, McBride acquired a reputation as a good hitter in the clutch. Incredibly, F.C. Lane of Baseball Magazine once declared that there were “few worse men for the pitcher to face with men on base than this same quiet, flawless fielder …”

Although considered relatively even-tempered and easygoing, McBride was a fiery competitor, subject to sudden bursts of temper. The most prominent of these occurred on June 30, 1916. McBride was facing Carl Mays of the Boston Red Sox, a notorious head hunter. Following some verbal jostling between the two, McBride was struck in the arm while protecting himself from a pitch that was tracking perilously close to his head. McBride stepped to the side of the plate, waited a few seconds, then wheeled and fired his bat at the Bosox pitcher, missing him by only a couple of feet. A lively altercation between the two teams ensued, a highlight of which was the Red Sox catcher Sam Agnew‘s sucker punch that landed in the face of Senators skipper Clark Griffith.

Fittingly, as the Deadball Era wound down, so did McBride’s playing career. He was replaced as the Senators’ regular shortstop in 1917 by Howard Shanks, reducing his playing time to 50 games that season. He remained on the roster through 1920, but saw his playing time further curtailed, never again playing in more than 18 games in a season. However, his primary role with the Senators during these final seasons was not as a player, but as a “manager in training” under the watchful eye of Clark Griffith. During this time he served as an instructor to the team’s younger infielders, as a base coach, and as a fill-in as manager when Griffith was away from the team scouting or tending to other front office duties. Prior to the 1921 season, Griffith stepped away from his on-field duties and appointed McBride the new team manager, the first in a long line of ex-Washington players to take the reins for Griffith.

McBride’s appointment as manager was popular throughout the baseball world, but ill fortune scarred the ex-shortstop’s first and only season as the club’s manager. On July 27, 99 games into the 1921 season, McBride was struck above the temple by a ball thrown by outfielder Earl Smith during practice prior to a scheduled contest with the Chicago White Sox. He reportedly suffered a slight concussion and partial paralysis of the face. He was confined to his bed for almost a week and returned to the club on August 4, but continued dizziness and fainting spells hampered his efforts to lead his squad. Nevertheless, McBride guided the 1921 Senators to a fourth place finish, with an 80-73 record, the best winning percentage achieved by the club during the 1919-1923 period. McBride continued to feel the ill effects of his injury during the off-season, and, on December 6 resigned his post as manager. Griffith offered him a job with the club as a scout, but he did not feel his health was good enough to accept the offer.

McBride stayed out of baseball until 1925, when he returned as a coach with the Detroit Tigers, serving as Ty Cobb‘s “first lieutenant” during the 1925 and 1926 seasons. Thereafter he spent one year as a coach with Newark in the International League, and another year back with the Tigers, coaching under manager Bucky Harris, who had previously played for McBride in 1921. George retired from baseball for good following the 1929 season, at the age of 48.

After leaving the game McBride returned to his hometown of Milwaukee, and supported himself primarily from the returns on successful investments he made during and following his playing days. He died at age 92 on July 3, 1973, after a brief illness. He was survived by his widow, Ann, and a grandson, and was buried in Milwaukee’s Holy Cross Cemetery.

“How Baseball Looks to Me: A Few Early Reflections and More Recent Impressions of the National Game”, Interview with George McBride, Baseball Magazine, July, 1912, pg. 51-53.