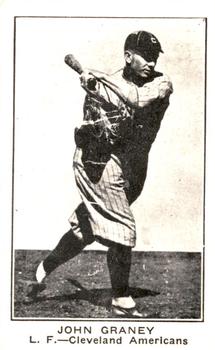 Today Jack Graney is best remembered as the man of the firsts. Graney was the first hitter Babe Ruth faced as a pitcher in the major leagues for the Boston Red Sox, one of the first major leaguers to take the field with a number on his uniform, and in 1908 was part of the first All-Star team to tour the Orient. After his career was over, Graney also became the first former player to become a baseball radio broadcaster. Never one to hit for power or for a high average, Graney generated offense by working the count and drawing walks, earning the nickname “Three-and-two Jack” in the process. “I believe the waiting game is the most effective batting system that could possibly be devised,” Graney once explained. “The batter can do the pitcher far more damage by waiting him out than he can possibly do by hitting safely. And isn’t that what the batter is supposed to do; disrupt the pitching defense in every legitimate way?” Graney’s hitting philosophy worked: despite posting a career batting average of just .250, the left-hander registered a .354 on-base percentage, and twice led the league in base on balls.

John Gladstone Graney was born in St. Thomas, Ontario on June 10, 1886, the sixth of nine children of James S. Graney and Mary Ann McFeely, who had moved their family to St. Thomas from Buffalo, New York, in 1880. Jack’s father, a baseball enthusiast who played much amateur ball in his day, supported the family as an operator and later chief train dispatcher on the Canadian Southern Railway. From an early age Jack displayed an unusual aptitude for sports, starring at both baseball and hockey. As early as 1897, when Graney was just 11 years old, his exploits on the baseball fields of St. Thomas caught the eye of area scouts. Ten years later, Bob Emslie, a Canadian native and National League umpire for 34 years, spotted Jack as a semipro pitcher and recommended him to the Chicago Cubs. Jack pitched for Rochester (New York) of the Eastern League in 1907 and Wilkes-Barre (Pennsylvania) of the New York State League, where he won 24 games prior to being sold to the Cleveland Naps at the end of the season.

Blessed with an extraordinary fastball, though little ability to control it, the 5′ 9″, 180-pound lefthander joined the big club at the start of the 1908 season. He appeared in two games, giving up two runs in 3⅓ innings before breaking his finger on a line drive off the bat of future teammate Neal Ball. Sidelined for a month following the injury, Graney was sent to Columbus of the American Association, where he remained until returning to Cleveland in mid-July. This time, Graney did not last long enough with the Naps to appear in any games; he was quickly shipped out to Portland (Oregon) for the remainder of the season. Rumors circulated that Cleveland manager Nap Lajoie did not like the wild lefthander, who had hit him in the head with a pitch during spring training. Years later, Graney confirmed that he had hit Lajoie during a spring practice, but denied that he was sent back to the minors because of the incident.

Graney joined the Portland Beavers midway through the 1908 season, finishing the season with a 12-13 record, 146 strikeouts and 111 walks. Though he had an even better season the following year for Portland, posting a 17-9 record in 31 games, management decided to make the wild Graney a left fielder. Jack finished the 1909 season with a .252 batting average in 385 at-bats, good enough to earn him a trip to Cleveland’s spring training in 1910, where he made the team.

Graney’s offensive skills matured slowly. In his rookie season, he managed only a .236 batting average with 37 walks in 116 games. Installed as the club’s leadoff hitter, Graney was instructed not to swing until he had two strikes on him. The strategy was successful: in 1911, Graney drew 66 walks and his batting average improved to .269. Though he played in an era when followers of the game exalted high batting average while mostly ignoring a player’s ability to get on base through means other than a hit, Graney became an enthusiastic proponent of his style of play. Perhaps because of his own struggles with wildness on the mound, Graney recognized the damage that could be done to a pitcher’s arm by working the count. “Not only does waiting a pitcher out impair his confidence and his control, but it also makes him work harder,” Graney argued. “A safe hit may be made on the first ball pitched. A pass is much more wearing on the pitcher’s arm.”

From 1911 to 1919 Graney never batted higher than .269, yet never posted an on-base percentage lower than .335. In 1916 he batted just .241, yet tied for the team lead with five home runs and led the league with 41 doubles, all while drawing 102 walks, second most in the league. In 1917 he batted just .228, yet led the league with 94 walks. Two years later he again led the league in free passes, with 105, despite posting just a .234 average and connecting for only 31 extra-base hits. F.C. Lane, comparing Graney’s walk totals to the man who challenged him that year for the league lead in walks, concluded, “could any contrast be clearer than the contrast between the massive, fence-smashing Ruth and the unimpressive, slender, and meager-hitting Graney? Ruth’s passes were gifts. Graney’s passes were earned.”

In the field Graney was considered an excellent outfielder, particularly adept at negotiating the tricky sun field at Cleveland’s League Park. Charged with patrolling the park’s spacious left field, which extended as far as 505 feet just left of center, Graney displayed above-average range and–not surprising for a former pitcher–a strong arm. As he established himself as a mainstay on the Cleveland roster, Graney also became something of a fan favorite in Cleveland, known for his sense of humor and attachment to the franchise. In a 1919 exhibition game against Tulane University, Graney took his position in left field on the back of a horse. Graney also cared for a bull terrier named Larry who became the club’s mascot. During the 1913 season Larry, as the Naps official mascot, entertained fans before games by leapfrogging over players’ backs, chasing down fans that carried straw hats, and retrieving foul balls in batting practice. Larry traveled with the team on the road and entertained the players on the field and in the Pullman cars. Often during the season the dog became so exhausted that Graney would send Larry back to his hometown of St. Thomas for a rest. The dog took an overnight lake steamer to Port Stanley, Ontario, where crewmembers let him off; he then rode the interurban streetcar to St. Thomas. The streetcar conductor would drop off Larry at Elgin Street and the dog would trot over to Graney’s parents’ home. In July of 1917 Graney took Larry along for a visit to the Rose Building in Cleveland. Larry became lost in the building and by the time he was found, two days later, had contracted distemper. Sadly, he had to be put down. The Cleveland baseball team never had another dog mascot.

In 1920 the first of two tragedies hit Graney. On August 17, 1920, Graney’s roommate and best friend Ray Chapman died after being hit in the head the previous day by a Carl Mays pitch. No one was more devastated by Chapman’s death than Graney. Upon viewing his friend’s body at the hospital, Graney broke down sobbing and had to be forcibly removed from the room. Two days later, Graney fainted during the viewing of Chapman’s casket. Graney was so distraught over the loss of his friend that he could not make it to the funeral. To the day he died he never forgave Mays for the fatal beaning. In 1962 writer Regis McAuley asked Graney about the incident. The old ballplayer’s words were as bitter as they had been more than forty years earlier: “People ask me today if I still feel Mays threw at Chappie. My answer has always been the same – yes, definitely.” The second great tragedy in Graney’s life came more than two decades later, in wartime; in May 1943, his only son was killed in an airplane training accident at Fort Bragg, North Carolina.

By the time the Indians appeared in their first World Series in 1920, Graney was only a part-time player, and had only three plate appearances in the Series win. Two years later, the 36-year-old Graney gathered only nine hits in 37 games and finished the season managing the Indians’ farm team in Des Moines, Iowa.

From 1923 to 1927 Jack operated a successful Ford automobile dealership in Cleveland. When Henry Ford changed his design from the Model T to the Model A, the Ford plant closed for a year and Graney, with no cars to sell, moved into investments. When, like so many other Americans, he lost everything in the 1929 stock market crash, Graney went back to selling cars, though he still struggled to make ends meet. Fortunately in 1932 radio station WHK won the broadcasting rights for the Cleveland baseball games and hired Graney as an announcer. Although he had a high-pitched voice, Graney’s clear and smooth delivery and sound knowledge of the game made him a popular choice. From 1932 to 1953 he was the voice of Cleveland baseball every year except 1945. “He was a careful reporter and observer,” Cleveland Plain Dealer reporter Bob Dolgan later remembered. “His voice dripped with sincerity and crackled with vitality. He wasn’t bored with baseball, you could tell he loved his job. He made baseball sound like sport.” After retiring from calling games for the Indians, Graney continued his broadcasting career as the announcer for the Cleveland Barons of the American Hockey League.

Jack Graney died of natural causes in a Missouri nursing home on April 20, 1978, at the age of 91; he was buried in Memorial Gardens Cemetery in Bowling Green, Missouri. His wife, Pauline, died five years later. In 1984 Graney was inducted into the Canadian Baseball Hall of Fame. The Douglas J. Tarry Sports Complex in his hometown of St. Thomas is dedicated in his honor, and SABR’s Cleveland chapter is named after him.

Mike Sowell, The Pitch that Killed, The Story of Carl Mays, Ray Chapman, and the Pennant Race of 1920, Ivan R Dee, New York 1966