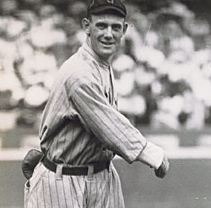 Cleveland hit the rails for its last swing through the Eastern teams in 1920. The trip would begin in New York and continue through Boston, Philadelphia, and Washington. The Indians would play 15 games before heading home to face Detroit on September 3.

The opener in New York on August 16 featured a dandy of a pitching matchup between Cleveland’s Stan Coveleski (18-9) and New York’s Carl Mays (18-8). Both right-handers were at the top of their game, while using different styles to get their results. Coveleski used the traditional overhand motion while Mays used a submarine-like delivery. It was said that Mays’s delivery was so low that on occasion his knuckles would graze the dirt on the pitching mound.

Coveleski had two 20-win seasons to his credit, and it seemed likely that a third was within his grasp with six weeks left on the docket. His main pitch was the spitball, and although this type of pitch was outlawed by major-league baseball beginning in 1920, Coveleski was one of 17 pitchers who were granted permission to keep throwing the spitball until he retired since it was his main pitch.

Mays had authored two 20-win seasons in 1916 and 1917 when he hurled for the Boston Red Sox. He was part of a deal that sent him to the Yankees on July 29, 1919. Mays had the reputation of plunking the batter, and at times the opponents would complain that it was his main pursuit instead of pitching.

It was a gray and dreary day at the Polo Grounds as the game neared its 3:00 P.M. start time. The threat of the skies opening up did not deter the estimated crowd of 21,000 from pushing through the turnstiles. Indeed, the game started with light rain falling, which eventually tapered off after the third inning.

Cleveland got on the board first. With one down in the top of the second inning, Steve O’Neill smashed his third home run of the season, into the left-field bleachers. New York had an opportunity to tie the score in the bottom of the frame. Ping Bodie led off with a single to left field for the Yankees’ first hit. Muddy Ruel sacrificed to first baseman Doc Johnston and Bodie moved to second base. Mays grounded one to Coveleski. Covey, as he was often called, threw to third baseman Larry Gardner to erase Bodie. Aaron Ward fouled out to O’Neill for the final out.

That was about as good a scoring threat as the Yankees mounted against Coveleski. Meanwhile, his teammates widened their advantage over New York. With one out in the top of the fourth, Gardner walked and went to third on a single to center by O’Neill. Johnston stepped into the batter’s box and slapped a groundball to shortstop Roger Peckinpaugh. Peck made a perfect throw to home to cut down Gardner, but catcher Muddy Ruel dropped the throw and Gardner scored an unearned run. Bill Wambsganss grounded to Ward at third, but he fumbled the ball and everyone was safe. The bases were loaded. Coveleski skied one to Bodie in center field to plate O’Neill and make the score 3-0, Cleveland.

Ray Chapman led off the fifth inning and the first pitch from Mays struck him on the left side of his head. He crumpled to the ground. Umpire Tommy Connolly, who was working the plate, immediately turned to the stands. He requested the services of a physician. Two responded to Connolly’s plea. A silence came over the crowd as the doctors worked on Chapman. Eventually he was able to get to his feet with the aid of two teammates, and walked across the infield to the Cleveland clubhouse (which players accessed through center field at the Polo Grounds). But Chapman lost consciousness, and two teammates had to carry him to the clubhouse. Chapman was taken to St. Lawrence Hospital, a half-mile from the ballpark, for x-rays. It was feared that he might have a fractured skull.

A shroud of gloom fell over the ballpark. Players on both teams, as well as the fans in the grandstand, were unsure how serious the injury was. Chapman, who was one of the more popular players in the league, was badly injured and it was reason enough for everyone to feel melancholy.

Harry Lunte ran for Chapman. Tris Speaker then sent a grounder to second baseman Del Pratt, who threw to Peckinpaugh to force Lunte. Back-to-back singles by Gardner and O’Neill enabled Speaker to score with the Indians’ fourth run.

Coveleski was having little trouble with the Yankees. He retired them in order in the first, second, fourth, sixth, and eighth innings. Through eight frames, the Yankees managed only four hits.

But in the bottom of the ninth, the Yankees staged a comeback. Babe Ruth led off and singled to right field, his only hit of the day. Pratt walked. Duffy Lewis, who like Ruth and Mays was obtained from the Red Sox, lifted a fly ball to the wall in left field. Charlie Jamieson raced back to the wall and made a sensational grab for the first out. Wally Pipp grounded out to first, and Ruth and Pratt each moved up a base. Both runners scored when Bodie doubled on a ball hit just inside the foul line in right field. Ruel followed with a single past third base and Bodie crossed the plate to cut the Yankees’ deficit to one, 4-3.

Speaker jogged in from his center-field position to have a talk with Coveleski. The right-hander assured Speaker that he was able to get the next batter and get the club a victory. Pinch-hitter Lefty O’Doul hit a groundball to short. Lunte went the short way, throwing to Wambsganss for the force out, and the end of the game.

But in spite of the victory, the mood was somber in the visitors clubhouse. The doctors at St. Lawrence operated on Chapman’s skull around midnight, and he survived the surgery. Speaker contacted Chapman’s wife, Catharine, who rushed to New York to be by her husband’s side. She was late arriving, and Chapman died in the early morning hours of August 17. Outrage was directed at Mays, who was not a sympathetic figure. Players from the Red Sox and Tigers took up a petition, demanding that American League President Ban Johnson ban Mays from playing baseball again. Mays contended that the baseball was wet and it sailed on him. Furthermore, what was to gain in hitting Chapman with a pitch?

“It is the most regrettable incident of my baseball career,” said Mays. “I would give anything if I could undo what has happened. Chapman was a game, splendid fellow.”1

“It is the duty of all of us,” said Speaker, “of all the players, not only for the good of the game, to suppress all bitter feelings. We will do all in our power to avoid aggravating the unfortunate impression in any way.”2

Chapman’s funeral was held at St. John’s Cathedral in downtown Cleveland on Friday, August 20. Thousands jammed the church or stood outside on Superior Avenue. Johnson, who attended the funeral, decided to take no action against Mays. The Indians returned to Cleveland for the service, then went back on the road to Boston. They played two doubleheaders at Fenway Park. Boston took three of four, as the Indians team undoubtedly played with heavy hearts.

Mays went into seclusion for about 10 days after Chapman’s death. New York came to Cleveland for a three-game series in September. Mays did not accompany the team.

The Indians went on to win the American League pennant, the first in franchise history. They defeated the Brooklyn Robins in seven games. Lunte, after replacing Chapman, pulled up lame and had to be taken out of the lineup. Cleveland acquired Joe Sewell from New Orleans of the Southern Association. Sewell went on to have a Hall of Fame career with both the Indians and Yankees.

Baseball is littered with players who will be linked together in baseball history: Herb Score and Gil McDougald; Ralph Branca and Bobby Thomson; Pete Rose and Ray Fosse; Kirk Gibson and Dennis Eckersley.

First and foremost, because of the circumstances, Carl Mays and Ray Chapman can be added to the top of the list.

All play-play-information was taken from the Cleveland Plain Dealer, August 17, 1920: 16. The author accessed Baseball-Reference.com for box scores/information and other data, and Retrosheet.org.