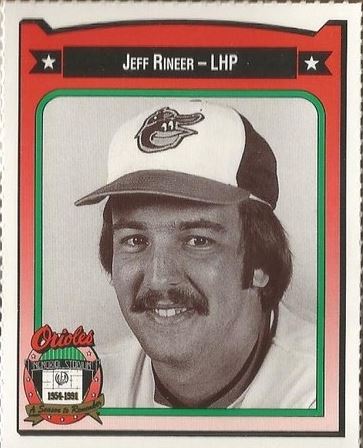 “I led the American League in ERA that year [1979]. That’s what I tell everybody.”1 That was Jeff Rineer talking to the Baltimore Sun in 2006, nearly 27 years after his lone appearance in the major leagues. Rineer was the pitcher of record on the winning side in the last game of the ’79 season, but alas, Don Stanhouse blew the save. Rineer had little chance to make it back to Baltimore after that. The lefty suffered a torn elbow muscle while pitching for Triple-A Rochester in 1980, and the organization released him in April 1981.

“I was a control pitcher,” Rineer remembered in 2011. “I threw around 90 miles per hour. I was mainly a fastball/slider pitcher, and in the minors I was a reliever, but in the middle of my Double-A season, I switched places with Tim Stoddard. I became a starter and he concentrated on short relief. They wanted me to develop all my pitches, including a change-up. I didn’t ever really have a great year in Triple-A. It was kind of iffy. They were looking for more from me. I stayed around a little longer because I was left-handed.”

Jeffrey Alan Rineer was born on July 3, 1955, in Lancaster, Pennsylvania. Rineer, a German surname, is fairly common in Pennsylvania Dutch country. Jeff was the youngest of three children born to Harold and Gladys Rineer, following a sister named Cindy and a brother named Dennis. The Rineers lived in Pequea, a few miles southwest of Lancaster. Specifically, they lived on Drumore Farm, the 900-acre country estate of local millionaire John F. Steinman, publisher and chairman of the board of Lancaster Newspapers, Inc. (who also had assorted other media interests). “My father was a private chauffeur and caretaker who oversaw the people who worked on the grounds. He was there for 40-some years. We lived in the caretaker’s house next to the mansion.”

Jeff came to baseball as he watched his father play church-league softball. “It was a very competitive league,” he recalled, “and that’s how I developed my interest. I started in Little League and went up through each classification. I was bigger than most kids.” As an adult, he stood 6-foot-4 and weighed 205 pounds. At Penn Manor High School in Millersville, Pennsylvania, “I made the basketball team my senior year in high school, but I think that’s because the basketball coach and the baseball coach were friends, and it was something that kept me in shape ahead of baseball season.”

As a pitcher in high-school and American Legion ball, Rineer was at least promising enough for the Oakland A’s to select him in the 23rd round of the 1973 amateur draft. “The scouts started coming around my junior year in high school,” he said. “I was telling people I wanted to go to college, which hurt me. I thought I could do better than the 23rd round, and the bonus was minimal. I would have gone to Lewiston, Idaho, which was a long way for someone who’d never been away from home.”

“But I was undecided. I lacked direction.” Although he considered other colleges, he went to Franklin & Marshall, a well-regarded liberal arts school. “I got a partial ride, and it was right at home in Lancaster.” As of 2011, Rineer remained one of just two players to reach the majors from F&M (the other was third baseman Don Wert). With the Diplomats, “I led Division III in strikeouts. I had two games where I struck out 19. Sammy Stewart, who became my teammate in Baltimore, led Division III in ERA [at Montreat College in North Carolina].”

Rineer also pitched for the Lancaster Raiders of the Lebanon-Lancaster Twilight League. This local semipro association was formed in 1926 and disbanded in 2002. As the Lancaster News wrote in 2002, “Twilight ball gives local college players decent competition in the summer, and provides a place to play for older ballplayers who aren’t ready to retire or ‘settle’ for softball, just yet.”2 However, Rineer said, “There weren’t many scouts around there.”

After Rineer’s sophomore year at F&M, in June 1975, the Orioles took him in the third round of the secondary phase of the draft (for which he was eligible after having turned down Oakland). Dick Bowie, Baltimore’s scouting supervisor for the Middle Atlantic states, had noticed him. “I was a little over my head academically, and so I dropped out. Since then, after finding out the percentages, I have instructed kids that it’s best to get a college education. But if I had to do it over again, I might have signed with the A’s. If I had done that, though, I would never have been with the Orioles, a top-notch organization.”

Rineer’s first assignment was Bluefield in the Appalachian League. After going 1-2 in four rookie-ball games there, he went to Miami in the Florida State League (Class A). He was 3-3 with a 5.62 ERA as he started seven times in 11 games. The stars of the staff were two Nicaraguan pitchers: Tony Chévez (whose big-league career consisted of four games with the Orioles in 1977) and Dennis Martínez.

After that season Rineer played winter ball in Venezuela with Cardenales de Lara. “Bruce Bochy was the catcher,” he recalled. “It was an eye-opener playing there in Barquisimeto, in the middle of the mountains where no one spoke English.” In ten games, he went 1-4 with a 7.00 ERA.

Rineer was back at Rochester to start the 1979 season, and the organization decided to make a starter of him once again. He started 26 times in 30 games, going 5-15 with a 4.39 ERA as the Red Wings finished a distant last in the International league at 53-86. Yet even though it had not been a successful season overall for him, there were bright spots for the 23-year-old. One was a three-hit shutout over Toledo on April 25. “That was the best game I’ve ever pitched in pro ball,” said Rineer. “I’ve never had a three-hitter before. That was my first nine-inning complete game since 1975 when I was at Bluefield.”3 He followed up even more strongly on May 2, allowing just two hits in nine innings. The Wings went scoreless too, though, and they eventually lost, 1-0, in the 11th inning.

The big club called Rineer up when rosters expanded that September. “We had very few left-handed relievers in the organization then,” he said. “It was just the numbers thing. In Baltimore, it was me and Tippy Martinez.” As the month went by, though, the rookie remained anchored in the bullpen. “If they hadn’t been going to the playoffs, I think I would have gotten more of a chance. After they clinched, they were using the starters and the top relievers like it was spring training.”

Finally, in the last game of the season, at Cleveland, Rineer’s opportunity came. “It was a token inning,” he said with a chuckle. “There you go.” Dennis Martínez didn’t have it that day, and he left with nobody out and one on in the sixth inning; the Orioles trailed the Indians, 4-3. Rineer got pinch-hitter Ron Pruitt to fly out and then Dave Roselló hit into a 6-4-3 double play. In the top of the seventh, catcher Dave Skaggs hit a two-run homer to give Baltimore the lead. Tippy Martinez pitched one scoreless inning and Don Stanhouse followed with another, but with two outs in the bottom of the ninth and the victory within grasp, “Full Pack” lived up to his nickname by walking two and giving up a game-tying single. The Orioles lost, 6-5, in 11 innings.

From 1901 through 2010, 18 men won in their only major-league mound outing. However, at least three of them – Sam Mertes, George “High Pockets” Kelly, and Brent Mayne – were position players who enjoyed lengthy careers. This has happened only four times since 1935: Aside from Mayne, the pitchers were Al Autry, John LeRoy, and Chris Saenz.

Rineer pitched winter ball again in the 1979-80 offseason, this time with the Caguas Criollos in the Puerto Rican league. When he reported to spring training in 1980, he was still unsigned, and a strained back slowed him down early. The most interesting thing that happened to him during camp that year was an opportunity to start an exhibition game in Nicaragua. The Development Group for Alternative Policies (a private nonprofit organization) sponsored the goodwill trip. The O’s split their squad, sending 18 men to Central America – Dennis Martínez got a chance to return to his native land.4 It was the first time a big-league club had visited there. Baltimore played two games against the Nicaraguan All-Star team: one in Martínez’s hometown, Granada, and the other in León. The first game was a 1-1 tie. Then in León, Rineer gave up seven hits and three runs in five innings as the Orioles lost, 4-2.5

“It was right after their civil war,” he recalled. “When we landed, there was a plane lying on its back on the runway. There were kids walking around with submachine guns. But they were good ballplayers. They had a good team.”

About a week after the León game, Baltimore optioned a group of players including Rineer to Rochester. He was one of just five holdovers from the Red Wings’ 1979 Opening Day roster. Just before the season started, though, he was placed on the disabled list.6 After he returned in early May, he got into 20 games, starting 10 of them. His record was 4-4, 5.07. Never a big strikeout pitcher, he whiffed just 23 men in 71 innings.

“They told me I pulled a muscle away from the bone in the elbow. I tried to come back [in spring training 1981], but I had quite a bit of pain. They told me that if I had surgery, it would take two years of rehab. I never did have an operation. I played fast-pitch softball for years after that, though I didn’t pitch, I played first base or DH. I didn’t have any more pain, but I really can’t throw – at all!”

After leaving baseball, Rineer went home to Millersville. “I’ve been in the snack business ever since. I was working for Herr’s for a while, and for about a year I’ve been a branch manager for Martin’s Potato Chips, which is a small company around here.” He has been married twice; with his first wife he had a son named Brooks – after Brooks Robinson. “I met him in 1976, just a class, class guy.” Jeff and his second wife, Desirée “Desi” Younger Rineer, had three children: a son named Josh, followed by twins Ashley and Ian.

Jeff Rineer is full of warm memories about his time with the Orioles. Even his e-mail address commemorates the 1979 team. “I grew up watching the Phillies and Baltimore, idolizing Brooks Robinson and Frank Robinson. When I became an Oriole, I found out what a great organization it was. Brooks and Frank, they didn’t put themselves on a pedestal – they were always willing to help the younger guys.”

“Jim Palmer, the same way. I saw Jim after about 20 years when he was broadcasting the Little League World Series. He could easily have forgotten my name, but he didn’t. It shows you what kind of guy he is. Pat Kelly: he became a preacher, and I went to see him once, and he called me out of the congregation. Mike Flanagan. Scott McGregor. Elrod Hendricks – I can’t express how good he was to everyone.”

“And the fans … two or three times a month at least, I still get autograph requests. I’ve had people come sit on my back porch, open up all this Orioles memorabilia. They can tell me where all the players are now. That’s really cool to me.”

Grateful acknowledgment to Jeff Rineer for his memories (telephone interview, May 8, 2011).