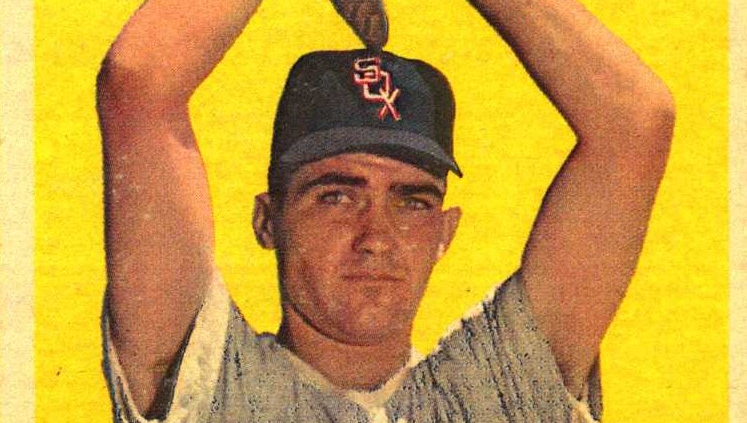 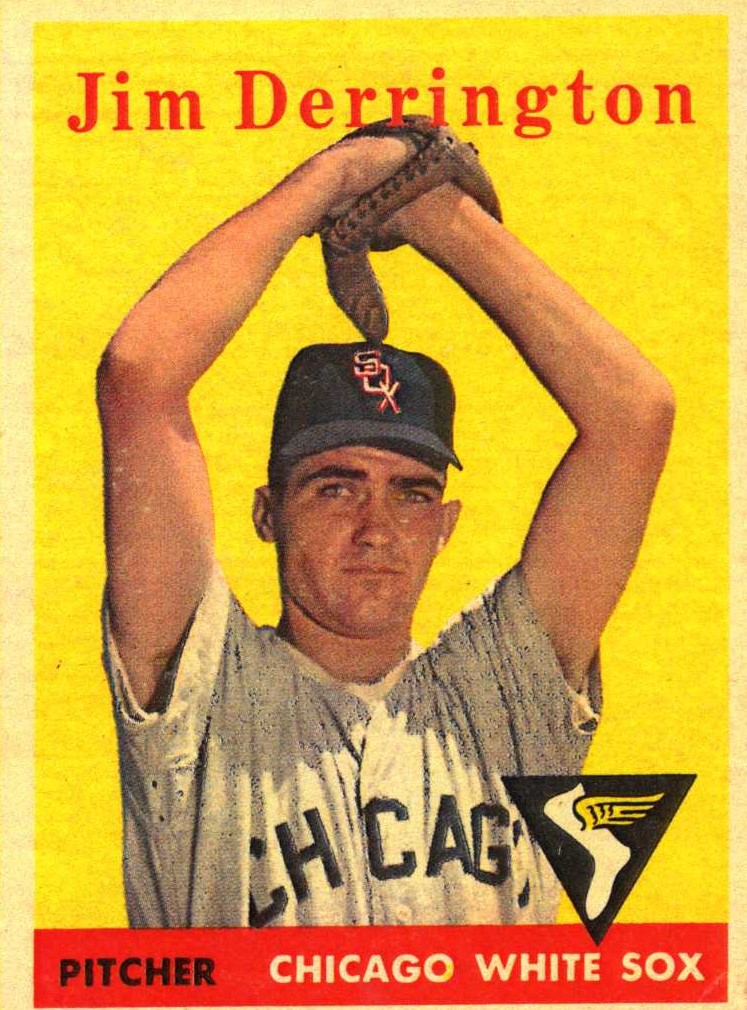 Jim Derrington’s major-league career was brief, but historic. When Derrington took the mound for the Chicago White Sox at the age of 16 years, 306 days on the final day of the 1956 season, he became the youngest pitcher since Willie McGill in 1890 to start a major-league game. Derrington, who singled off Kansas City Athletics pitcher Bill Harrington in the fourth inning of that game, remains the youngest player in American League history to record a hit. Unfortunately for Derrington, his major-league career was over before he turned 18, and his career as a player in Organized Baseball ended due to injuries in 1961, when he was still only 21.

Born on November 29, 1939, in Compton, a Southern California city about 10 miles south of downtown Los Angeles, Charles James Derrington had baseball in his bloodlines. Derrington’s father, Charles, played minor-league ball in the years just prior to America’s involvement in World War II, and his maternal uncle, Herman Reich, had a 111-game career as a first baseman-outfielder with the Senators, Indians, and Cubs, all in 1949. The 1940 census lists Charles Sr. as a “ball-player” in the Middle Atlantic League. Charles, 20, and his wife, Evelyn, lived in the Reich family home. Herman’s father, Carl, worked as a machinist in a paper mill. Herman Reich, 22, was listed as a ballplayer in the Pacific Coast League. Jim Derrington’s birth may have prevented his dad from reaching the majors. “Dad was going with the Indians,” he told Chicago Tribune writer David Condon, “and since I was just a baby, he wanted mom and me with him. But when Cleveland wouldn’t pay the family transportation, dad stayed in California with us.”1

Charles Derrington’s career in Organized Baseball ended when the United States entered World War II, but both he and Jim’s uncle Herman taught Derrington the nuances of baseball from an early age. “With my uncle and dad,” he told Condon, “that’s about all there has ever been for me: baseball. I’ve been playing since I could walk, and I would toddle with dad when he went to play in the semi-pro and minors.”2 In grade school Derrington skipped the third and fifth grades, but with his size (he grew to be 6-feet-3 and 190 pounds) and athletic skills, he had no difficulty competing against often-older players at South Gate High School in South Gate, California, a city a few miles north of Compton. A pitcher-first baseman, he batted .452 at South Gate while posting a 10-2 record with an 0.23 ERA and 159 strikeouts in 88 innings. As a 16-year-old senior in 1956, Derrington batted .414 and went 8-2 on the mound, with two no-hitters. He was named the Los Angeles City Player of the Year by the Helms All-Southern California Board of Baseball. Paul Deitz, a boyhood friend of Derrington’s who would go on to become a college baseball coach, told the Los Angeles Times in 1991: “I’ve coached in college and Alaska and sent 15 players to the major leagues and I could safely say that no one that I ever saw in my lifetime was as good as Jim was at that point in time. … He was a man among boys.”3

When Derrington graduated from high school, four major-league teams, including the New York Yankees, offered him large bonuses to sign, despite the fact that the rules of the time required that any player signing for a bonus greater than $4,000 was required to remain on his team’s 25-man roster for the next two years. White Sox scout Hollis Thurston had been watching Jim for several years, and the White Sox eventually signed Derrington for a bonus of $78,000 (press accounts of the time significantly underestimated the size of the bonus, with reports ranging from $40,000 to 65,000). The actual signing did not take place until September 10, as Commissioner Ford Frick ruled that an agreement between the major leagues and the American Legion required Derrington to play a season of American Legion ball before signing.

When Derrington joined the White Sox in September of 1956, the club was far behind the eventual pennant winners, the New York Yankees, but was battling the Cleveland Indians and Boston Red Sox to finish second in the American League race (Chicago ultimately finished third with an 85-69 record). White Sox manager Marty Marion kept the 16-year-old on the bench until he gave the youngster a start against the last-place Athletics in Kansas City on September 30, the final day of the season.

Derrington retired A’s leadoff man Vic Power, then surrendered three straight hits. He also walked two batters and committed a balk in the frame, with Kansas City scoring twice. After giving up three more hits and another run in the second inning, Derrington seemed to find his rhythm, working three scoreless innings while allowing only one hit. “After the first inning or so, I kinda settled down,” he recalled. “It was really hell the first inning or two – I was all over the place with it.”4 But in the sixth inning Derrington weakened, permitting three runs on a walk to Joe DeMaestri and home runs by Power and Lou Skizas. He was removed for a pinch-hitter in the top of the seventh, having allowed nine hits and six runs (five earned), along with six walks and three strikeouts. He was charged with the loss in Chicago’s 7-6 defeat. Although pitch counts aren’t available for Derrington’s performance, the online website Boyd’s World Estimated Pitch Calculator estimates the 16-year-old’s pitch count at 116, based on those stats.5 As a batter Derrington also recorded his historic single in the top of the fourth. “The 6 foot 3 inch 190 pound southpaw was impressive in spots and obviously nervous in others,” wrote Robert Cromie in the Chicago Tribune. “Five of Derrington’s walks came on a 3-2 pitch, and he showed a slow curve that fooled several of the Kansas City hitters completely. All in all, it was a performance that should not have discouraged Manager Marion.”6

Derrington had two at-bats in the game. George Brunet struck him out in the top of the second and then he singled to right field off Bill Harrington in the top of the fourth. He was left stranded at first base. Over the course of his brief career, he had nine plate appearances, with a total of six at-bats. This was his lone base hit.

The bonus rule required the White Sox to keep Derrington on their 25-man-roster for the entire 1957 season, and new manager Al Lopez, who had replaced Marion, used the youngster sparingly, with 20 appearances, including five starts. Overall he posted an 0-1 record with a 4.86 ERA. Lopez assigned veteran pitcher Dick Donovan to be Derrington’s roommate, and Derrington later praised Donovan for assisting his development. As for his relationship with Lopez, Derrington commented that “I never said two words with him all the time I was there. But he did give me every opportunity I could ask for.”7 Derrington had some impressive moments in 1957, particularly in relief, posting a 1.54 ERA in his 15 appearances out of the bullpen. His biggest problem was control; overall he issued 29 walks in 37 innings pitched, with only 14 strikeouts. His season highlight came in a start against the Detroit Tigers on August 10 at Comiskey Park. In that game Derrington did not allow a hit until the sixth inning, permitted just three hits overall, and shut out the Tigers until the eighth inning, when he was lifted after surrendering a two-run homer to Reno Bertoia. The White Sox eventually lost the game, 6-4.

Under the bonus rules of the time, Derrington would have had to remain on the White Sox roster for most of the 1958 season, and offseason reports projected an expanded role as a lefty reliever in 1958. But in January of that year, the major leagues changed the rules to allow bonus players to be sent to the minor leagues without restriction. Although Derrington did not know it at the time, he had thrown his last major-league pitch at the tender age of 17.

Derrington spent most of the 1958 season with Colorado Springs of the Class-A Western League; he had a winning record (10-8) but an ugly ERA (7.06). He was also 0-1 in four games at Indianapolis of the Triple-A American Association. He seemed to break through in 1959, posting a 10-8 record with a 3.68 ERA for Charleston of the Class-A Sally League. He ranked among the league leaders in several categories and pitched in the league’s All-Star game.

“After my second year in the minors, I was really pitching well,” Derrington commented in 1991. “I knew I was going to be back up [to the majors] and be there for a long time.”8 The White Sox moved him up to their top farm club, San Diego of the Pacific Coast League, to start the 1960 season. But he tore ligaments and tendons in his left elbow in a spring-training game, and the team doctor “told me I’d be able to throw again but not like I did.”9 Demoted back to Class A, the former high-school pitcher-first baseman tried becoming a position player, but after batting only .223 in 84 games for Charleston, “found out there were a lot of things I couldn’t do as a first baseman … or a hitter.”10

Derrington attempted a return to pitching, but his old fastball was gone. “Against Tommy Harper one night,” he recalled, “I threw eight breaking balls in a row, and I said to myself, ‘He’s going to be ready for what was left of my fastball.’ He hit it over the center-field scoreboard. I said to myself, ‘This isn’t making it.’”11 Pitching for two minor-league teams in 1961, Derrington went 7-5 with a 4.08 ERA; when he failed to land a job either as a pitcher or a coach in the spring of 1962, he decided to retire.

Married with three daughters, Derrington returned to South Gate and went to work in his father’s TV and appliance store; he also helped his old friend Paul Deitz as an assistant coach at Chapman College in 1964-65. Derrington’s father died in a car accident in 1968, and Jim took over the business, which had grown to five stores. In 1979 he sold the TV/appliance stores and got a job managing a produce company. Still interested in working in baseball, he switched to part-time work brokering produce in 1988; with his afternoons free, he became an assistant to baseball coach Dolf Hess of Fullerton (California) High School, also coaching the team in a summer league.

Derrington’s last work in baseball came as a pitching coach and manager in the independent Western and Big South Leagues in the late 1990s. In 1995 he became pitching coach for the Sonoma County (California) Crushers in the Western League; in 1996, he held the same role for the Western League Tri-City (Washington) Posse. Then in 1997, Derrington became manager of the Greenville (Mississippi) Bluesmen in the short-season Big South League; he led the club to a second-place finish with a 39-20 record.

In 1998, Derrington returned to the Western League as manager of the Pacific Suns. The Suns had moved to Oxnard, California, from Palm Springs prior to the ’98 season. Derrington was one of several ex-major leaguers in the league that year, joining Wally Backman, Dick Dietz, Charley Kerfeld, Bill Plummer, Buck Rodgers, and Derrel Thomas. This time, Derrington’s managerial stint was unsuccessful; he was fired in midseason after the club got off to a 13-32 started.

Derrington remained in Southern California after his minor-league managerial career ended, settling in La Habra in Orange County. He expressed no regrets about being force-fed into the majors as a 16-year-old. “A lot of people said it came too soon, that I wasn’t ready for that kind of pressure,” he reflected. “But I don’t know. I was throwing as hard as I could. I knew I could play at that level. I do know that for all the kids who play baseball, the biggest dream you ever have is to play in the big leagues, and that dream came true for me. All things considered, I wouldn’t change a thing.”12

In addition to the sources cited in the Notes, the author consulted both Baseball-Reference.com and Retrosheet.org.