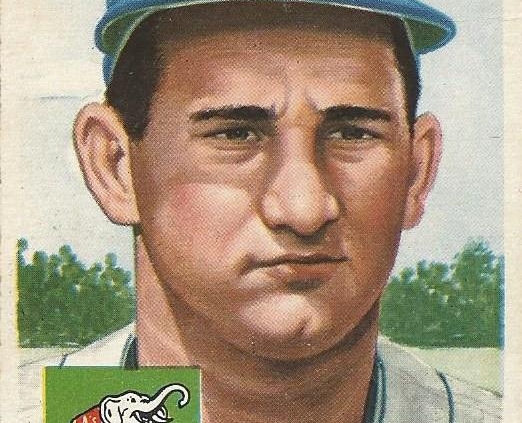 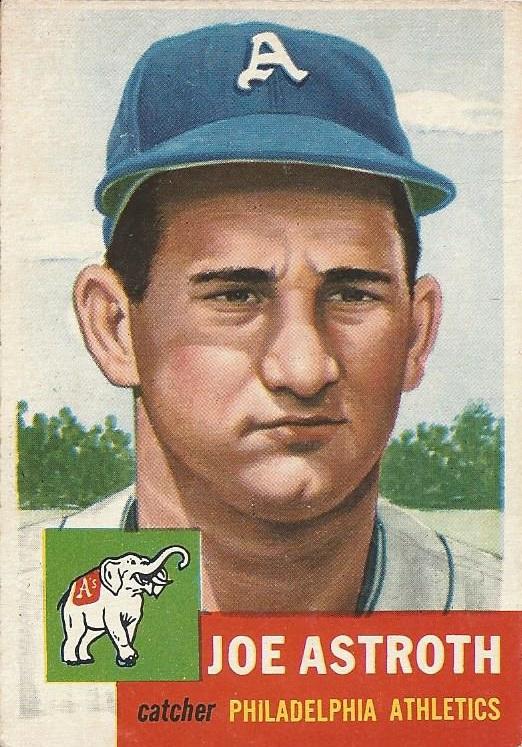 Joe Astroth was a model of consistency for 10 years with an Athletics franchise that moved from Philadelphia to Kansas City, an area of the Midwest that had not enjoyed major league baseball since the nineteenth century. As a catcher, he was a solid defensive player who regularly threw out opposing baserunners and was an important link at home plate in many double plays. His career percentage of “caught stealing” — 49 percent — ranks among the all-time best. At least part of Astroth’s athletic abilities were due to the 187 pounds that were packed onto his 5-foot-9 frame.

Astroth is one of only nine players to collect six RBIs in a single inning, a remarkable feat which he accomplished in 1950 as a member of the Philadelphia Athletics.11 He also had a reputation for handling many of his teams’ best pitchers, and was Bobby Shantz’s personal catcher during 1952, when Shantz won 24 games and was that year’s American League Most Valuable Player.

Joseph Henry Astroth was born on September 1, 1922, in East Alton, Illinois, to August and Mary Astroth. His father, a native of Germany, was a fire inspector at a local oil refinery. His mother was born in Austria and worked as a homemaker. In addition to Joe, the family included his older brother, Laverne, his younger sister, Margaret, and a younger brother, Robert.

Astroth attended Wood River High School in the nearby town of Wood River, graduating in 1940. While there he competed in football, basketball, and baseball. Following graduation, he attended the University of Illinois at Urbana-Champaign, where future big leaguer Hoot Evers was a teammate. At Illinois, he again played football, basketball, and baseball, and aspired to become a coach like his older brother.

Astroth left college in 1942 and began serving in the United States Coast Guard during World War II. The young catcher was stationed at the Coast Guard Academy at New London, Connecticut, and played for Babe Young’s Coast Guard Dolphins. Scout Tom Fleming saw him there and recommended him to the Philadelphia Athletics. Astroth was also offered a contract to join the Dodgers by George Sisler.

The year 1945 was a big year for Astroth. Immediately following his discharge, he was offered a contract as an amateur free agent with the Philadelphia Athletics at the age of 22. His major league debut came on August 13, 1945, when he entered the game as a pinch hitter without ever having played a single minor league game. He appeared in 10 games that season, with 18 plate appearances. His 17 at bats resulted in one hit for an .059 BA, one run scored, one RBI, and one strikeout. Astroth ranks among the 11 youngest players who began their American League rookie season in 1945.

Except for one hitless game with the Toronto Maple Leafs, the Athletics’ AAA affiliate in the International League, he spent the 1946 season with the Lancaster Red Roses in the Class B Interstate League. In 97 games he banged out 87 hits, including 13 doubles, three triples, and six home runs, posting a batting average of .289 and a slugging percentage of .412. His total bases numbered 124. In September of that year, he returned to Philadelphia and was 1-for-7 in four games.

Astroth had another solid season in 1947 while playing for the Savannah (Georgia) Indians, the Athletics’ affiliate in the South Atlantic League. In 141 games he had 475 at bats and batted .280; his 133 hits included 22 doubles, six triples, and seven home runs. He posted a .396 slugging percentage and 188 total bases.

Following that season, Astroth and Marjorie I. Beele were married at St. Mary’s Church in Alton, Illinois, on October 18, 1947. Their 65-year union produced a daughter and three sons.

Astroth had another strong season in 1948, when he appeared in 116 games for the Memphis (Tennessee) Chickasaws, the AA affiliate of the Chicago White Sox. He batted .352 with 22 doubles, nine triples, and four home runs, for a slugging percentage of .501.

As the 1949 season began, Astroth, age 26, was back home with Philadelphia. He appeared in 55 games for the Athletics, batting .243. The next year he saw less playing time, but improved on offense, batting .327 with 18 RBIs in only 39 games. A highlight of his career took place that season on September 23 in a night game against the Washington Senators at Griffith Stadium.. A right-handed batter, he accounted for six of the 12 runs that the Athletics scored during a sixth-inning rout. He hit a grand slam to deep left field off pitcher Julio Moreno, followed by a two-run single later in the same inning. The A’s won, 16-5, and Astroth boosted his season average to .314.

For the next four years Astroth shared catching duties with a changing cast of catchers, appearing in more than 100 games only once, in 1952. His best offensive numbers peaked at .296 in 1953.

In 1955, the Athletics franchise, forever linked to Philadelphia and Connie Mack, moved halfway across the country to Kansas City with a new manager, Lou Boudreau. Astroth and Wilmer Shantz shared the catching duties. Astroth caught 100 games, but drove in only 23 runs while hitting .252, virtually matching his career batting average of .254.

Astroth’s final day of major league baseball came on May 13, 1956. He had played in eight games producing only one hit, and was optioned to the San Diego Padres, the Cleveland Indians’ affiliate in the Pacific Coast League. There he played in 96 games and produced 45 RBIs. In both 1957 and 1958, Astroth played for the Buffalo Bisons, the Athletics’ AAA team in the International League.

For his 10 years in the major leagues, Astroth played in 544 games. There is reason to believe that he enjoyed his days in professional baseball, despite playing mostly for second-division teams.

One anecdote, from 1955, stands out from a game when the Kansas City Athletics were playing against the New York Yankees.

“Mickey Mantle hit one of the longest home runs in Yankee Stadium history off Alex Kellner on June 21. Mantle drove one of his pitches 486 feet, clearing the 30-foot screen in dead center field and into the stands. It was the first home run hit to that part of Yankee Stadium. ‘I threw him a changeup,’ Kellner said. ‘He didn’t hit it out of the ballpark like a changeup. It went by my head on a line shot. I turned around and it started climbing, climbing, climbing like a golf ball. It went straight into the bleachers. Joe Astroth was catching. He came out to the mound. The only thing he said — very serious — was, ‘I’m glad we didn’t throw him a fastball.’ ‘I laughed at that. Astroth had called for a fastball.’”2

Vic Power, a Kansas City teammate, was called a “magician with his defensive ability” by manager Lou Boudreau, and Astroth agreed.

Former teammate Joe DeMaestri remembered Astroth as a verbal presence. “Joe Astroth, our catcher, was more of a leader — but maybe he was more of a clubhouse lawyer than a leader,” said DeMaestri. “Actually, he was a talker. Whether voicing an opinion or working with a player, he would talk, talk, talk.”4

When it came to pitchers, Astroth told Jason Stromberg of the South Florida Sun Sentinel in a 2010 interview that Bobby Shantz was his favorite pitcher to catch. He carried an officially signed autographed American League baseball around with him to prove it.

“I caught every ball he threw for the A’s because I was such a big catcher,” Astroth said, with a chuckle. “I ran the game for him. He never shook me off. He did what I said. We were very close at the time and we still are.”5

Astroth’s defensive abilities also were a key component in his career, especially during the 1953 season. That year he ranked first in the American League for the number of double plays turned as a catcher, with 13, and in the percentage of base runners caught stealing, at 72.1. He ranked second in the AL for the number of runners caught stealing, with 21, and was fourth in the number of assists as catcher, with 47. His overall fielding percentage that year, .987, ranked fourth in the league.

After his successful years of professional baseball, Astroth was the proprietor of two family run businesses: Pit-Catcher Bowling Lanes and The Bullpen Dairy Bar in Chalfont, Pennsylvania. Later, he worked in professional sales and was plant superintendent for General Copper and Brass Company in Collingdale, Pennsylvania. He was an avid golfer and played in many charitable golf events throughout the Northeast.

Astroth and former Athletics teammate Spook Jacobs threw out the first ball at a game at Veterans Stadium in Philadelphia on June 18, 2002.

Although ballroom dancing was a passion for Astroth and his wife Marjorie, their jitterbug dancing was a highlight of their children’s wedding receptions.

Astroth passed away in Boca Raton, Florida, at the age of 90, on May 3, 2013. In addition to his wife, he was survived by his daughter, Janet A. Thompson of Delray Beach, Florida, his sons, August A. Astroth of Charlotte, North Carolina; Joseph H. Astroth, Jr. of San Rafael, California; and Brian D. Astroth of Midlothian, Virginia; 10 grandchildren and two great-grandchildren.

On May 7, 2013, he was buried at the South Florida National Cemetery in Lake Worth, Florida.

Prior to his death, Astroth ranked among the 500 oldest major league baseball players.

This biography was reviewed by Bill Nowlin and Norman Macht and fact-checked by Kevin Larkin.

In addition to the sources cited in the Notes, the author also consulted www.baseball-almanac.com, www.baseball-reference.com, Baseball in Wartime.