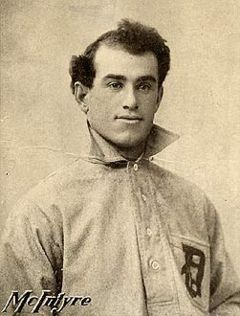 Praised for his outfield defense and savvy base running skills, Matty McIntyre was the starting left fielder and leadoff hitter on two Detroit Tiger pennant winning teams. Although a broken ankle in 1907 somewhat diminished his defensive abilities, McIntyre was still able to contribute with the bat upon his return and was considered to be among the best left-handed batters facing left-handed pitching. In 1908 he led the major leagues in runs scored and was part of one of the greatest outfields of all time along with Ty Cobb and Sam Crawford. Long a nemesis of Cobb and long rumored to be on the trading block, McIntyre was nonetheless a popular player on the teams for which he played and led a number of all-star teams to Cuba during his off-seasons.

Matthew W. McIntyre, one of seven sons of Irish immigrants James McIntyre and Bridget Larkin, was born on June 12, 1880 in the village of Pawcatuck near Stonington, Connecticut. Early in his childhood his family moved to Staten Island, New York, where he attended primary school. He learned baseball on the Staten Island sandlots late in his boyhood and rapidly demonstrated skill in the sport. In June 1901 Augusta (Maine) of the New England League signed him on to play left field. Quickly taking over the third batting spot, McIntyre hit .292. Upon the disbanding of the Augusta team, Connie Mack signed McIntyre to play for the Philadelphia Athletics in their inaugural year, and the young outfielder made his major league debut on July 3, 1901.

Although McIntyre batted a solid .276 in 82 games with the Athletics, he was “not considered fast enough” to stay in the majors and was turned over to Newark (New Jersey), Philadelphia’s unofficial farm team in the Eastern League. He spent all of 1902 in Newark, playing left field, hitting in the middle of the order, and batting .256. After the season ended, he was traded to the Buffalo of the Eastern League where he continued to play left field. Hitting over .400 at midseason, McIntyre started to get noticed in the press. He finished 1903 with a .342 average and was drafted in September by the Detroit Tigers.

McIntyre was so impressive at the Tigers’ 1904 spring training camp that one season preview called him a “find.” He quickly lived up to this billing with good base running, solid fielding, and “reliable” hitting, going on to bat .253 in 152 games while batting second in the lineup. A Detroit newspaper elaborated on this success, noting, “The sensation of the team, and the one man who stands head and shoulders above anything taken from the minor league this year, is left fielder McIntyre. He is developing into a grand baseball player in every department. He seems to have the faculty of bunting and beating out his bunts, or of hitting the ball to the farthest end of the lot. The general opinion in this city is that seems to be that McIntyre, with one more year in the big league, will have Willie Keeler skinned in every manner. On the bases he has shown wonderful speed and the same is true of his fielding.”

McIntyre enjoyed another solid season in 1905, batting .263 and moving into the leadoff position late in the year. He also started to develop an ability to hit left-handers. Former teammate George Moriarty recalled that “Matty reversed the order by requesting the southpaws to only throw the ‘hook’ when he was in batting practice. He also sought out kid pitchers who threw left-handed, and after regular batting practice he biffed their slants all over the lot. As a reward, Matty was never yanked out of the line-up in a pinch when he faced a left-hander. His intensive batting-practice program made him one of the greatest left-handed batsmen who ever faced a southpaw.”

Due to the late August addition of Ty Cobb to the Tiger outfield, 1905 turned out to be a pivotal year for McIntyre. Within a week, the two were at odds. In the bottom of the ninth inning of a close game against the White Sox, Cobb overzealously pursued a fly ball that was in McIntyre’s territory which caused McIntyre to drop the ball and nearly lose the game. The play contributed to McIntyre taking a quick dislike of Cobb. Their feud escalated the following year as McIntyre actively participated in hazing the brash rookie and Cobb fought back.

McIntyre started off the 1906 season in fine form garnering praise from manager Bill Armour for a number of spectacular catches, but quickly fell out of Armour’s favor. In late June, he was roasted by Armour for not chasing a ball down to the fence. McIntyre’s refusal to return to the field led to his being suspended for “indifferent work.” In response, he fired off a telegram to the Washington Post in which he expressed his desire to play in Washington. He also prepared letters to the National Commission demanding his right to play and threatened to jump to an outlaw league. The Tigers in turn announced that all offers to trade for or purchase McIntyre would be declined. During the suspension, McIntyre showed up every day at the park and practiced with the Tigers while announcing his intent to “play his best ball for the club.” The Tigers, however, would not reinstate him until he formally reported and asked to play. The issue was settled when McIntyre gave in just before the team departed for a long road trip. After the suspension, rumors of dissension among Tiger players began appearing in the press and McIntyre’s relationship with Cobb was brought to light. McIntyre finished the season batting .260 with a career best 29 stolen bases, but whispers of his imminent departure were rampant.

Early in 1907, Chicago, Boston, and Washington made offers for McIntyre that the Tigers turned down. Reportedly due his inability to get along with Cobb, he refused to sign a contract with the Tigers until just before opening day. His season lasted only 20 games as he broke an ankle while sliding feet first into first base attempting to avoid a collision with Boston’s Bob Unglaub in a May game. While he recovered from his injury, the Tigers used McIntyre to scout players in the minor leagues.

McIntyre returned to the field in 1908 to enjoy his best season ever at the plate while helping the Tigers defend their American League championship. In the last and pennant-deciding game of the season at Chicago, his first inning single off Doc White sparked a four-run rally which secured the title for the Tigers. Many observers thought that McIntyre was as valuable as any player on the team. Serving as the perfect leadoff hitter, he led the league with 105 runs scored and 258 times on base while posting a .392 OBP.

His remaining years with the Tigers were not productive. After recovering from a battle with appendicitis, McIntyre posted a poor .244 average in 1909 and was limited to three at-bats in the World Series. Both his baserunning and defensive abilities seemed to be hindered by the ankle that he had broken in 1907. In the off-season, he managed a team made up mostly of Tiger players that played a series of games in Cuba. The experience was so positive for him that he repeated the trip in subsequent years. His 1910 season echoed his 1909 campaign and he gradually lost playing time to Davy Jones. With the franchise tiring of McIntyre’s annual salary holdouts, the club finally agreed to sell him to the White Sox for between $2000 and $3000.

McIntyre was well-received by the White Sox and quickly became a crowd favorite as he turned in a stellar year at the plate. Playing most of his games in right field, McIntyre scored 102 runs in 1911 while posting a career-best .323 average. That off-season he returned to Cuba — not as a barnstormer, but as a full-fledged member of the Cuban Winter League’s Almendares team, a squad that also included Cuban pitching legend José Méndez. The following year in the majors, however, McIntyre was a shadow of his former self, reporting late to the club and batting just .167 in 84 at-bats. In September, McIntyre was sold to San Francisco of the Pacific Coast League, where he batted .336 but declined a contract offer for the following season. Returning east, he hooked on with Providence of the International League, where he played for two seasons. In 1914, the Providence team won the International League title behind the pitching of Carl Mays and Babe Ruth as well as the hitting of McIntyre, who posted a .310 average.

McIntyre took over as manager of the Lincoln (Nebraska) Tigers in the Western League for the 1915 season. Late in the 1916 campaign he was engaged as manager of the Mobile Sea Gulls in the Southern Association, where he remained until a franchise shake-up in May of 1917. He returned to Detroit in 1917 where he played for local semipro clubs “more for the pleasure which it could afford him than any baseball franchise could.”

Following a siege of influenza, McIntyre died at age 39 on April 2, 1920, in St. Mary’s Hospital in Detroit from Bright’s disease, a kidney ailment known today as nephritis. He was buried in St. Peter’s Cemetery on Staten Island and was survived by a wife, the former Grace Kennedy.

Ty Cobb with Al Stump, My Life in Baseball: The True Record, Doubleday, 1961.

Al Stump, Cobb: the Life and Times of the Meanest Man Who Ever Played Baseball, Algonquin Books of Chapel Hill, 1994.